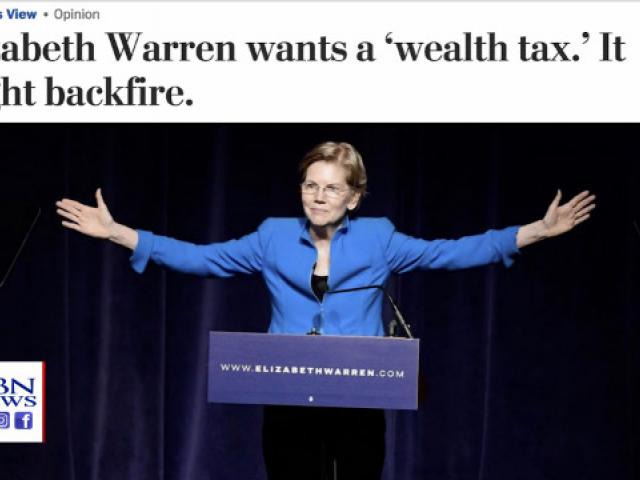 WASHINGTON – The US national debt is now at a record high, reaching a stunning $22 trillion. And the Congressional Budget Office projects it should reach $30 trillion within a decade. Government spending is out of control and the latest proposals from Democrats will only make it worse.

The Green New Deal and Medicare for All will cost trillions of more dollars. To fund those programs some Democrats are calling for drastically higher taxes.

As Democrats settle into their House majority and start eyeing the White House, they appear to be in competition for proposing the biggest tax hikes. The big question? Will their tax increases actually pay for the programs they're proposing?

From Sen. Elizabeth Warren's (D-MA) "Ultra Millionaire Tax" to Julian Castro citing 90 percent tax rates to the new Democratic darling, Rep. Alexandra Ocasio-Cortez's (D-NY), proposal of 70 percent tax rates for the nation's top earners, there is one constant: Ensuring the government gets a greater cut from America's wealthiest is becoming as stylish among Democrats as those pink women's march hats.

Their goal is the following:

While the party's progressive Left supports these plans, others say they wouldn't work.

In 2018, the first year of the Trump tax cuts, the government took in more tax money than ever before.

One reason is many of those loopholes that many wealthy taxpayers used to pay less closed.

Moore fears such a drastic rise in tax rates would kill American competitiveness because the same companies creating the jobs and setting employment records would once again send their business to China.

Plus, Moore thinks taking more than half of what a citizen makes is not only bad for the economy, it's contrary to the American dream.

"I really believe tax rates when they reach 50, 60, 70, 80 percent – that's immoral. You know, if you make twice as much money as me, you should probably pay twice as much income tax, but not five times more or 10 times more," he says.

If some of these tax plans were enacted, President Donald Trump says America would end up looking like Venezuela.

"That was the richest state in all of that area. That's a big, beautiful area, and by far the richest. And now it's one of the poorest places in the world. That's what socialism gets you, when they want to raise your taxes to 70 percent," Trump says.

A race to the highest tax rates wasn't always popular among Democrats. Remember, it was a Democratic Congress that helped President Ronald Reagan pass his tax cuts.

And before Reagan, another president cut taxes – John F. Kennedy.

"The most famous Democrat who argued for lower tax rates was, of course, John F. Kennedy, one of our most revered presidents, who when he came into office we had 90 percent tax rates and he slashed those tax rates because he said, 'Guess what? It's going to help our economy if we get tax rates lower,'" Moore says.

Regardless, expect even more creative plans for higher taxes as we inch closer to the presidential race in 2020.