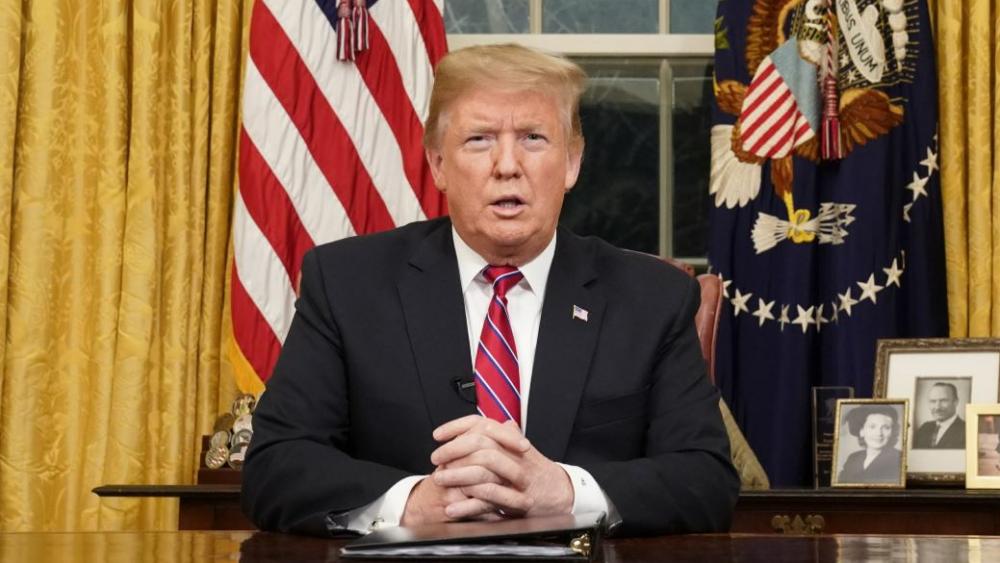 Watch the president's address to the nation. Click the video above.

President Donald Trump took his case for a border wall directly to the American public Tuesday night, contending that security and humanitarian problems along the US southern border have reached "crisis" proportions.

In a nine and a half-minute, prime-time televised address -- his first from the Oval Office -- Trump said all Americans are hurt by uncontrolled illegal migration because it strains public resources and drives down jobs and wages.

Trump also said the southern border was a pipeline for a vast quantity of illegal drugs, including meth, cocaine, and fentanyl — a drug problem that costs the US $500 billion a year. He says funding a border barrier is a small price to pay to battle such a huge problem.

The president noted that "women and children are the biggest victims by far of our broken system."

He said Democrats have refused to acknowledge the border crisis and they are the only reason the government remains closed. But he believes a compromise could be made with Democrats and has invited them to come to the White House to meet with him again on Wednesday.

Trump requested for American citizens to call Congress and make their views known.

Although the president has considered the idea of declaring a national emergency in order to secure the necessary funding and bypass Congress for the $5.7 billion he has requested, Trump did not make such a declaration.

Trump plans to visit the Mexican border on Thursday in order to racchet up pressure on congressional Democrats to compromise and reopen the government.

Trump's address was followed by a televised rebuttal from House Speaker Nancy Pelosi and Senate Minority Leader Chuck Schumer, who strongly oppose the wall and have repeatedly called on Trump to reopen shuttered portions of the government while border negotiations continue.

During the Democratic response, Pelosi agreed with the president on the need to secure our borders, but believes that there's no security threat, "the women and children at the border are not a security threat, they are a humanitarian challenge. She went on to accuse President Trump of "cruel and counterproductive policies."

"Make no mistake: Democrats and the President both want stronger border security," Schumer said.  "However, we sharply disagree with the President about the most effective way to do it. There is no excuse for hurting millions of Americans over a policy difference."

Read the entire transcript of President Trump's address below.

THE PRESIDENT:  My fellow Americans: Tonight, I am speaking to you because there is a growing humanitarian and security crisis at our southern border.

Every day, Customs and Border Patrol agents encounter thousands of illegal immigrants trying to enter our country.  We are out of space to hold them, and we have no way to promptly return them back home to their country.

America proudly welcomes millions of lawful immigrants who enrich our society and contribute to our nation.  But all Americans are hurt by uncontrolled, illegal migration.  It strains public resources and drives down jobs and wages.  Among those hardest hit are African Americans and Hispanic Americans.

Our southern border is a pipeline for vast quantities of illegal drugs, including meth, heroin, cocaine, and fentanyl. Every week, 300 of our citizens are killed by heroin alone, 90 percent of which floods across from our southern border.  More Americans will die from drugs this year than were killed in the entire Vietnam War.

In the last two years, ICE officers made 266,000 arrests of aliens with criminal records, including those charged or convicted of 100,000 assaults, 30,000 sex crimes, and 4,000 violent killings.  Over the years, thousands of Americans have been brutally killed by those who illegally entered our country, and thousands more lives will be lost if we don't act right now.

Last month, 20,000 migrant children were illegally brought into the United States -- a dramatic increase.  These children are used as human pawns by vicious coyotes and ruthless gangs.  One in three women are sexually assaulted on the dangerous trek up through Mexico.  Women and children are the biggest victims, by far, of our broken system.

This is the tragic reality of illegal immigration on our southern border.  This is the cycle of human suffering that I am determined to end.

My administration has presented Congress with a detailed proposal to secure the border and stop the criminal gangs, drug smugglers, and human traffickers.  It's a tremendous problem.  Our proposal was developed by law enforcement professionals and border agents at the Department of Homeland Security.  These are the resources they have requested to properly perform their mission and keep America safe.  In fact, safer than ever before.

The proposal from Homeland Security includes cutting-edge technology for detecting drugs, weapons, illegal contraband, and many other things.  We have requested more agents, immigration judges, and bed space to process the sharp rise in unlawful migration fueled by our very strong economy.  Our plan also contains an urgent request for humanitarian assistance and medical support.

Furthermore, we have asked Congress to close border security loopholes so that illegal immigrant children can be safely and humanely returned back home.

Finally, as part of an overall approach to border security, law enforcement professionals have requested $5.7 billion for a physical barrier.  At the request of Democrats, it will be a steel barrier rather than a concrete wall.  This barrier is absolutely critical to border security.  It's also what our professionals at the border want and need.  This is just common sense.

The border wall would very quickly pay for itself.   The cost of illegal drugs exceeds $500 billion a year -- vastly more than the $5.7 billion we have requested from Congress.  The wall will also be paid for, indirectly, by the great new trade deal we have made with Mexico.

Senator Chuck Schumer -- who you will be hearing from later tonight -- has repeatedly supported a physical barrier in the past, along with many other Democrats.  They changed their mind only after I was elected President.

Democrats in Congress have refused to acknowledge the crisis.  And they have refused to provide our brave border agents with the tools they desperately need to protect our families and our nation.

The federal government remains shut down for one reason and one reason only: because Democrats will not fund border security.
My administration is doing everything in our power to help those impacted by the situation.  But the only solution is for Democrats to pass a spending bill that defends our borders and re-opens the government.

This situation could be solved in a 45-minute meeting.  I have invited Congressional leadership to the White House tomorrow to get this done.  Hopefully, we can rise above partisan politics in order to support national security.

Some have suggested a barrier is immoral.  Then why do wealthy politicians build walls, fences, and gates around their homes?  They don't build walls because they hate the people on the outside, but because they love the people on the inside.  The only thing that is immoral is the politicians to do nothing and continue to allow more innocent people to be so horribly victimized.

America's heart broke the day after Christmas when a young police officer in California was savagely murdered in cold blood by an illegal alien, who just came across the border.  The life of an American hero was stolen by someone who had no right to be in our country.

Day after day, precious lives are cut short by those who have violated our borders.  In California, an Air Force veteran was raped, murdered, and beaten to death with a hammer by an illegal alien with a long criminal history.  In Georgia, an illegal alien was recently charged with murder for killing, beheading, and dismembering his neighbor.  In Maryland, MS-13 gang members who arrived in the United States as unaccompanied minors were arrested and charged last year after viciously stabbing and beating a 16-year-old girl.

Over the last several years, I've met with dozens of families whose loved ones were stolen by illegal immigration.  I've held the hands of the weeping mothers and embraced the grief-stricken fathers.  So sad.  So terrible.  I will never forget the pain in their eyes, the tremble in their voices, and the sadness gripping their souls.

How much more American blood must we shed before Congress does its job?

To those who refuse to compromise in the name of border security, I would ask: Imagine if it was your child, your husband, or your wife whose life was so cruelly shattered and totally broken?

To every member of Congress: Pass a bill that ends this crisis.

To every citizen: Call Congress and tell them to finally, after all of these decades, secure our border.

This is a choice between right and wrong, justice and injustice.  This is about whether we fulfill our sacred duty to the American citizens we serve.

When I took the Oath of Office, I swore to protect our country.  And that is what I will always do, so help me God.

Thank you and goodnight. 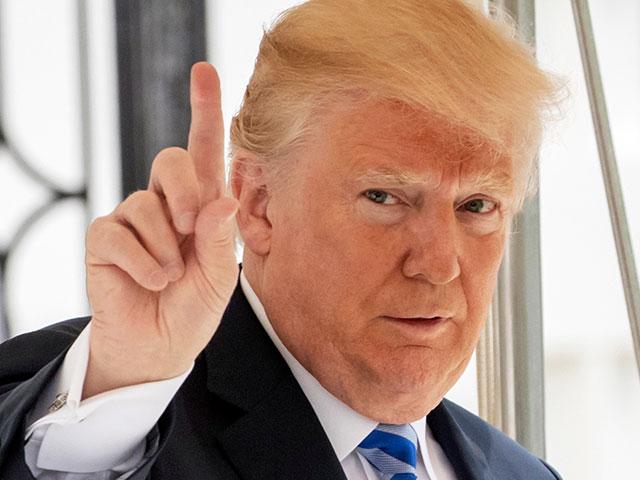 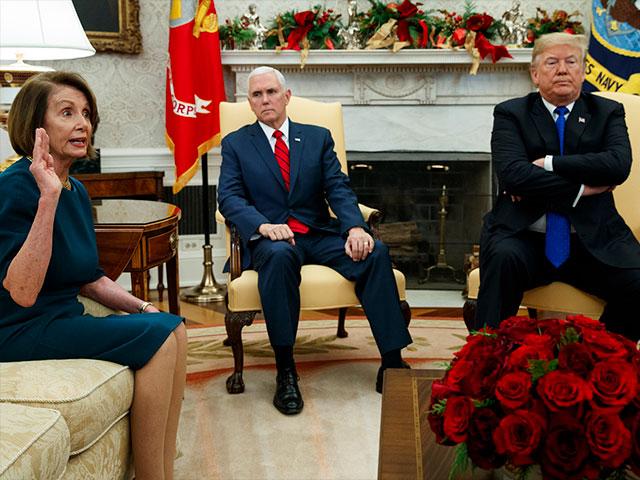