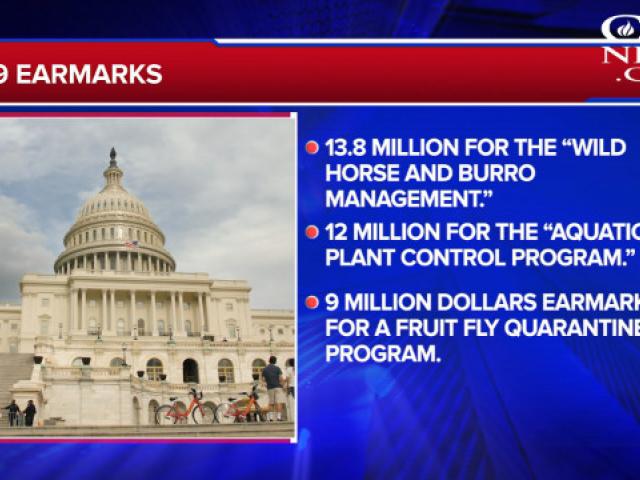 WASHINGTON – The Treasury Department estimates federal deficit spending for 2019 will exceed $1 trillion. The watchdog group Citizens Against Government Waste says a lot of that is due to earmarks, an old tactic some thought had gone away.

"The 2019 Pig Book shows that Congress still has Pork Barrel Fever and their only prescription has been more earmarks," said CAGW President Tom Schatz at a report rollout event this week.

"The increase in pork barrel spending has occurred behind closed doors and hidden from taxpayers," explained Schatz. "There are no names of legislators attached and really no information about where the money is being spent."

"There was a study last year spending $2 million to discover if the person in front of you in the cafeteria sneezes on the food, are you more or less likely to eat that food? This is crazy," said Sen. Rand Paul (R-KY) at the rollout of the Pig Book.

Paul's "Pennies Plan" to balance the budge in five years and cut spending by $11 trillion was defeated.

"I think the only way we'll ever fix it – we can try to have process reforms where we tell them not to be wasteful – but the bottom line is, if you have $100 and next year I give you 95, you're going to be better with your spending. You'll cut out the fluff. You'll cut out the waste," said Paul.

Stephen Moore with the Heritage Foundation says DC is in the midst of a bipartisan spending spree.

"I fear it might take another financial crisis before Congress acts, but then it might be too late," Moore told CBN News. "We've seen a rocketing of our debt especially in the last 10 years where Obama took the debt from 10-to-20 trillion."

CAGW attributes the recent increase in pork barrel spending to the 2018 passage of the Bipartisan Budget Act which obliterated 2011 spending restraints.

"Like my momma used to say, she's in heaven, but I can hear her say, 'Baby if you got it, doesn't mean you've got to spend it,'" said Rep. Tim Burchet (R-TN). "And I'm afraid we don't have it and we're still spending it."

These lawmakers say it's up to voters to hold their representative accountable, and for those who have less than stellar scores to be voted out of office.