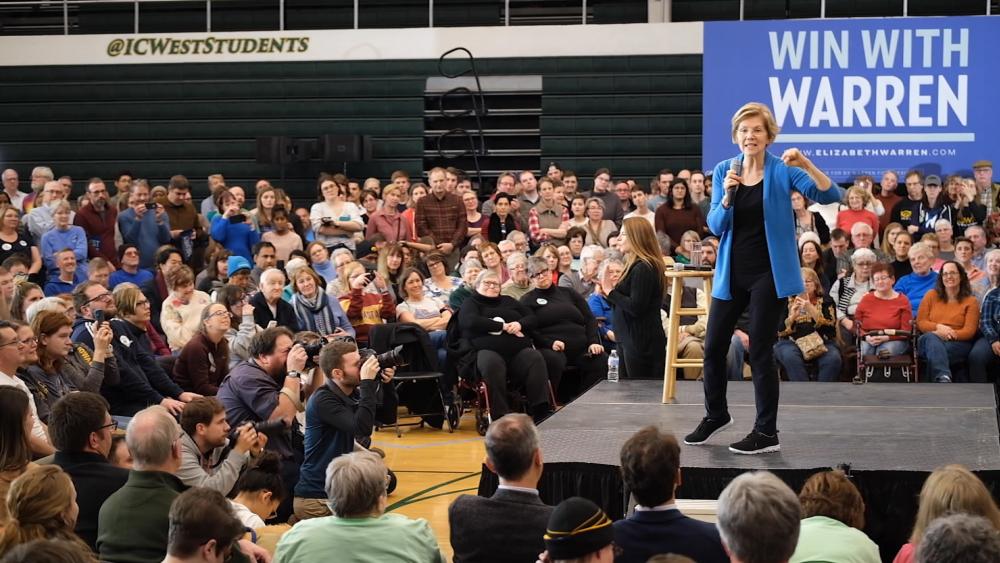 DES MOINES, Iowa - Democratic presidential candidates have been blitzing the state of Iowa in a frenzied finish before voters cast their ballots in tonight's first-in-the-nation caucus. Four candidates are locked in a tight race.

The Democratic hopefuls have been hosting multiple events and covering hundreds of miles desperate to win over those last-minute votes. Thousands of Iowans and political tourists crammed into large venues to hear directly from candidates one last time ahead of Monday's vote.

After being stuck in impeachment hearings in Washington all week, Sen. Elizabeth Warren (D-MA) made up for lost time on the campaign trail by recruiting her dog Bailey, known as her "furrogate", to stand in her place in her famous post-rally selfie line.

"It's going to take some big structural change are you ready for that?" Warren asked an enthusiastic crowd.

Nearby, former Vice President Joe Biden addressed a packed gymnasium touting a message of unity. "I refuse to accept the notion that we're going to be in total chaos and war with the other side because we're done if that's true," commented Biden.

But he also went on the attack against President Trump.

"In a room with our flag officers and generals, he looked them in the eye and referred to them as losers, dopes, and babies – who in God's name does he think he is talking to our people like that?" questioned Biden. "To state the obvious, this commander in chief not only doesn't understand it but if he does he's the most calloused son of a gun we've ever had as president."

A day before the caucus, many voters like Daryl Hagans of Des Moines told CBN News they're still undecided.

"I'd probably say my top three would be Pete (Buttigieg), Biden and Warren," explained Hagans.

Monday night could end with the top four, Biden, Warren, Buttigieg and Bernie Sanders, seeing only slight differences in their number of delegates.

"In our polling, there's about five points that separates the top from the second and they're all sort of bunched together," explained political science professor and pollster David Peterson. "And one thing we know about the Iowa caucuses is attitudes of Iowans are pretty fluid and they change pretty fast in those last couple days."

While Senator Bernie Sanders appears to be leading in the state he narrowly lost four years ago, Peterson speculates his 2020 surge may have peaked.

"The supporters of those other four top candidates are much more likely to settle amongst each other than they are to switch over to Sanders," noted Peterson.

Moderate Democrats like Robert Fuhs of Indiana, a Pete Buttigieg supporter, says he's not quite ready to feel the Bern. "I don't think the Midwest will go for this. Bernie's idea of immediate healthcare for everybody when 50 percent of the country is pretty happy with what they have right now, I can't imagine that winning," Fuhs told CBN News.

And others are hesitant to vote Biden back in office.

"If it's Biden or Bernie they're too old, I can't vote them, I'm sorry," said Mary Marksmeyier of Des Moines, a Buttigieg supporter. "I'm 68, I would not try to vote for somebody older than me."

But other Democrats stand ready to unite around whoever the nominee ends up being.

"I will be behind whoever the candidate will be," declared Veronica Tessler, an Elizabeth Warren supporter.

"I think it's important that the Democratic Party stay united," echoed Sean Nelson, who stands behind Bernie Sanders.

Tonight the country and party leadership will get the first glimpse of whether voters prefer moderate candidates like Joe Biden and Pete Buttigieg or want a more progressive choice like Senators Bernie Sanders or Elizabeth Warren.