'I Think You Called Me a Liar on National TV': Amid Sanders-Warren Spat, Dems Worry They Can't Beat Trump 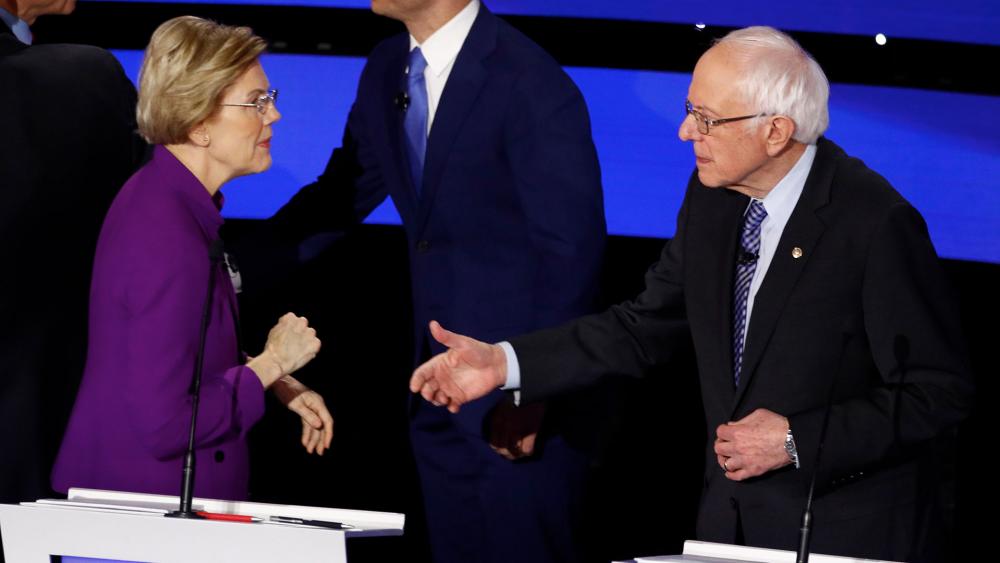 There's new evidence of growing division and fear among Democrats, especially after the public spat between two of their top presidential contenders.

After the Democratic presidential debate Tuesday night, Sen. Elizabeth Warren accused Sen. Bernie Sanders of calling her a liar during a tense exchange where she refused to shake his outstretched hand.

The rift was clear on video, but their mics weren't on at the time. Now CNN, which co-hosted the debate, has released a recording from the moment that marred the evening.

Sanders replies, "Alright, let's not do it now."

During the debate, Sanders denied Warren's claim that he told her a woman couldn't win the White House during a one-on-one meeting in 2018.

Their dispute after the debate was the latest development in the accelerating rift between the two top progressive candidates. It has many activists on the Left worried that it could split their voters and drive many of them toward Joe Biden.

During the debate, Sen. Warren said she thinks a female candidate would actually have the best shot at winning the 2020 presidential election. "Look at the men on this stage, collectively they have lost 10 elections," she said. "The only people on this stage who have won every single election that they've been in are the women."

But after the debate between the top six Democrat candidates, some progressives expressed their fear that they're not sure if any of the potential candidates can beat President Trump. Liberal commentators Al Sharpton and Van Jones both came out said exactly that.

"There was nothing I saw tonight that would be able to take Donald Trump out," Jones said.

Jones continued his dire warning about the current candidates tweeting, "I had high expectations for the candidates during tonight's #DemDebate, but there was a spark missing on stage. It felt like cold oatmeal to me. Do you agree?"

I had high expectations for the candidates during tonight’s #DemDebate, but there was a spark missing on stage. It felt like cold oatmeal to me. Do you agree? @CNN