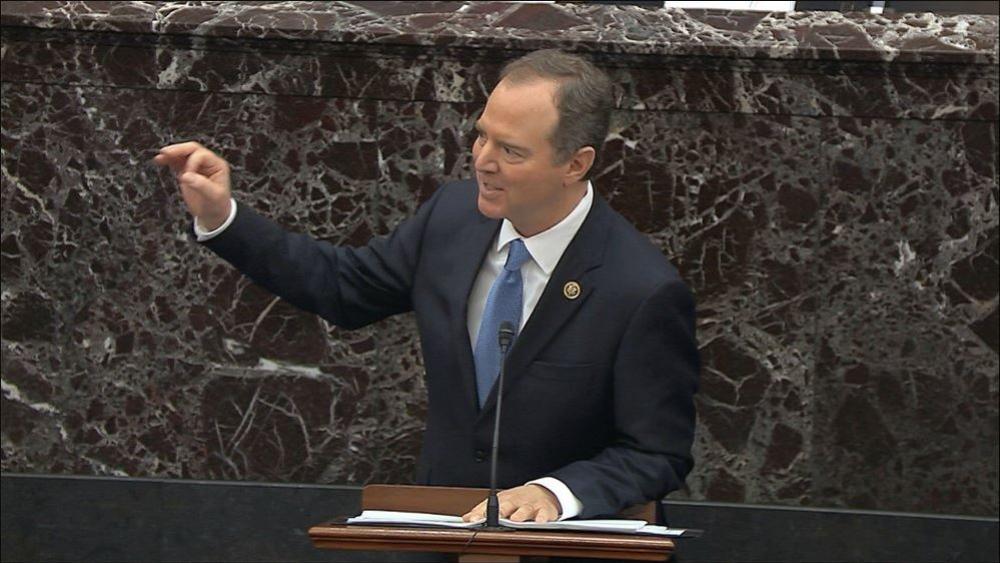 In this image from video, House impeachment manager Rep. Adam Schiff, D-Calif., speaks during the impeachment trial against President Donald Trump in the Senate at the U.S. Capitol in Washington, Thursday, Jan. 23, 2020. (Senate Television via AP)

House Democrat managers launched into their final arguments at President Donald Trump's impeachment trial in the Senate on Friday.

As Democrats pressed their case before skeptical Republican senators for the third day, the president's legal team is preparing its defense, expected to start Saturday.

The Senate jurors faced another long day Friday armed with pens and paper — and, for Republicans, the gift of fidget spinners — for the historic trial.

Before Friday's session began, Senate Chaplain Barry Black prayed, "Lord guide them with your wisdom... in spite of disagreements may they strive for civility... give them the wisdom to distinguish between facts and opinions."

Democrat prosecutors have two articles of impeachment they're trying to convince the Senate about, and they spent all of Thursday evening on the first article which claims "abuse of power". So they're spending Friday focusing on their second article, claiming the President obstructed their investigation.

GOP senators, who are growing tired of the long hours of the trial, have defended Trump's actions in dealing with Ukraine as appropriate. They consider the impeachment process as a politically motivated effort to weaken him in his reelection campaign.

Trump's defense team is now arguing that the impeachment articles against him are invalid because the articles do not allege that he committed a specific crime.

The president's attorney Jay Sekulow said, "We will be putting on a vigorous defense of both facts, rebutting what they said," and the Constitution.

The Senate is heading next week toward a pivotal vote on Democratic demands for testimony from top Trump aides, including acting Chief of Staff Mick Mulvaney and former National Security Adviser John Bolton who refused to appear before the House. It would take four Republican senators to join the Democratic minority to seek witnesses, and so far the numbers appear lacking.

"This needs to end," said Sen. Lindsey Graham (R-SC), a Trump confidant. He said he doesn't want to hear from Bolton or the Bidens.

During their presentations, Democrats have been summarizing much of the evidence and testimony already presented during televised House impeachment hearings.

Sen. John Barrasso (R-WY) said it seemed like "Groundhog Day in the Senate."

Republicans hold a 53-47 majority in the Senate, and acquittal of President Trump is considered likely.