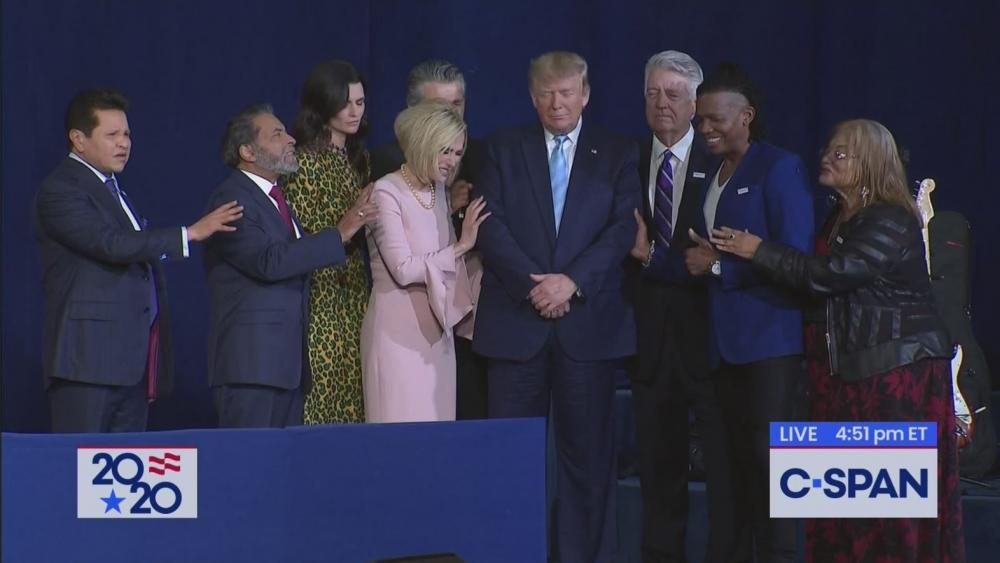 Before President Trump spoke at the campaign rally at Miami's El Rey Jesus Church, a group prayer was said for the President. (Image credit: C-Span)
6119587894001 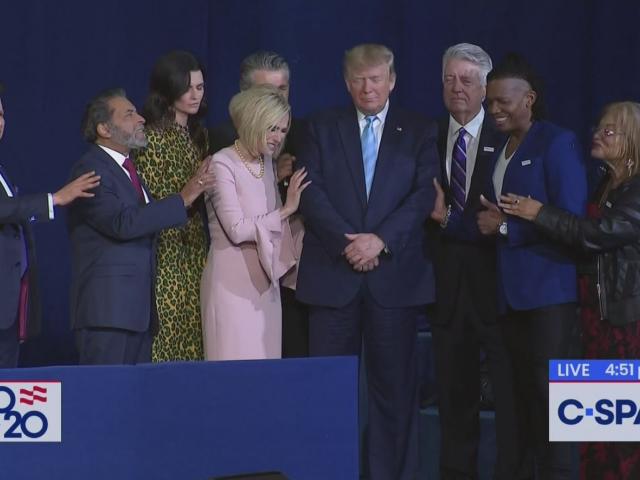 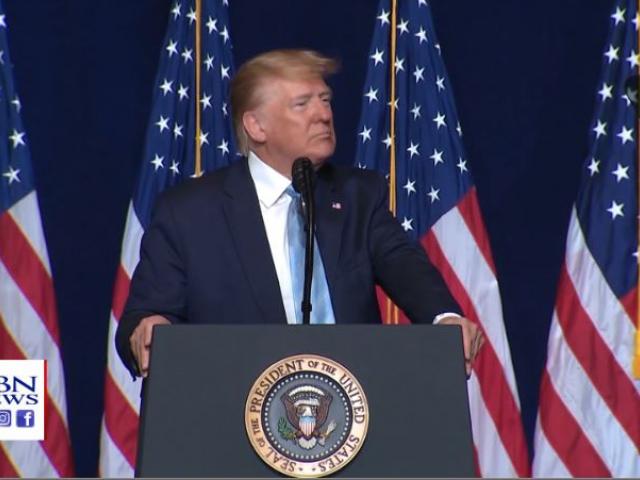 ABOVE: Listen to the group prayer spoken over President Trump before he spoke at Friday's campaign rally in Miami, Fla.

President Donald Trump hosted his kickoff rally of "evangelicals for Trump" in 2020 at the King Jesus International Ministry in Miami Friday afternoon.

Pastor Guillermo Maldonado welcomed the audience of more than 5,000 people to the event at the church he and his wife Ana founded. Tony Perkins, the president of the Family Research Council led the Pledge of Allegiance, which was followed by singer Danny Gokey performing the National Anthem.

After a group prayer, the President was introduced to the audience by Paula White.

While the audience cheered, Trump stood behind the pulpit and warned terrorists not to challenge the United States.

Referencing Thursday's attack against Iranian Gen. Qassem Soleimani, Trump said: “So let this be a warning to terrorists, if you value your own life, you will not threaten the lives of American citizens."

The President called the operation that killed Soleimani "a flawless strike."

“Qassem Soleimani has been killed and his bloody rampage is now, forever gone," Trump told the cheering audience. “He was plotting attacks on Americans, but we’ve now insured his atrocities have been stopped for good."

The President also took a moment to remind Iran that the US does not want war.

Touting the accomplishments made during his administration, Trump reminded the audience that faith and family need to be at the center of American life.

"For America to thrive in the 21st century, we must renew faith and family as the center of American life," he said.

Trump also pointed to his efforts for religious liberty both in the US and around the world. “We’re defending religion itself. A society without religion cannot prosper. A nation without faith can not endure,” said Trump. “We can’t let one of our radical left friends come in here because everything we’ve done will be gone in short order.”

“The day I was sworn in, the federal government's war on religion came to an abrupt end,” Trump declared. He later added, “We can smile because we’re winning by so much.”

The President also condemned anti-Semitism, mentioning the recent attacks on Jews in New York. He also said that his administration would continue to stand up for Israel.

"It is not only logical but—arguably—politically brilliant that the president will kick off 2020 with the launch of his reelection's evangelical outreach at a Latino megachurch in the state of Florida," he said.

According to exit polls, 29 to 30 percent of Latinos voted for President Trump in 2016.

"The driving forces behind that Hispanic support may this time garner even greater support: faith values and economic opportunity. Latino evangelicals represent a constituency that is pro-life, supportive of religious liberty, and focused on biblical justice," Rodriguez said.

He believes many Latino Christians are unlikely to support politicians who promote socialism, arguing that it was "a socialistic worldview that destroyed Venezuela and Cuba and serves as the primary conduit for economic and civil rights oppression in Latin America."

Not all evangelicals are in Trump's camp. Last month, a Christianity Today op-ed argued President Trump "should be removed" from office. The magazine got backlash from the evangelical publication's founder's son – Franklin Graham.

Trump received more than 80% of the evangelical support in 2016 and hopes to build on that number as he gets closer to 2020. A number of Christian leaders are weighing in on the event, saying many evangelical voters are still firmly supporting Trump.

Pastor Jack Graham of Prestonwood Baptist Church in Dallas, TX, said, "As evangelicals, we are enthusiastically supportive of our President and his policies. The rally is an opportunity for us to recommit to the continuation of his presidency and the promise of America's best values."

And Rev. Johnnie Moore tells CBN News, "Every indication is that President Trump will ride an evangelical wave right back into the Oval Office in 2020, but this time the coalition will be even larger and even more diverse. He ran in 2016 as a promise maker but in 2020 he's running as a promise keeper; having not just met but exceeded the expectations of his constituents."

The Miami rally comes after the Trump campaign reported it raised $46 million in the fourth quarter of 2019, far ahead of any Democratic candidate.

A new Associated Press poll shows big support for President Trump among white evangelicals who are also distinct on abortion.

They spoke to 1,000 American adults from various faith backgrounds and found 67% of white evangelical protestants support making abortion illegal except in cases of rape, incest or threats to a mother's life.

That's compared to 45% of Catholics and 37% of all Americans.