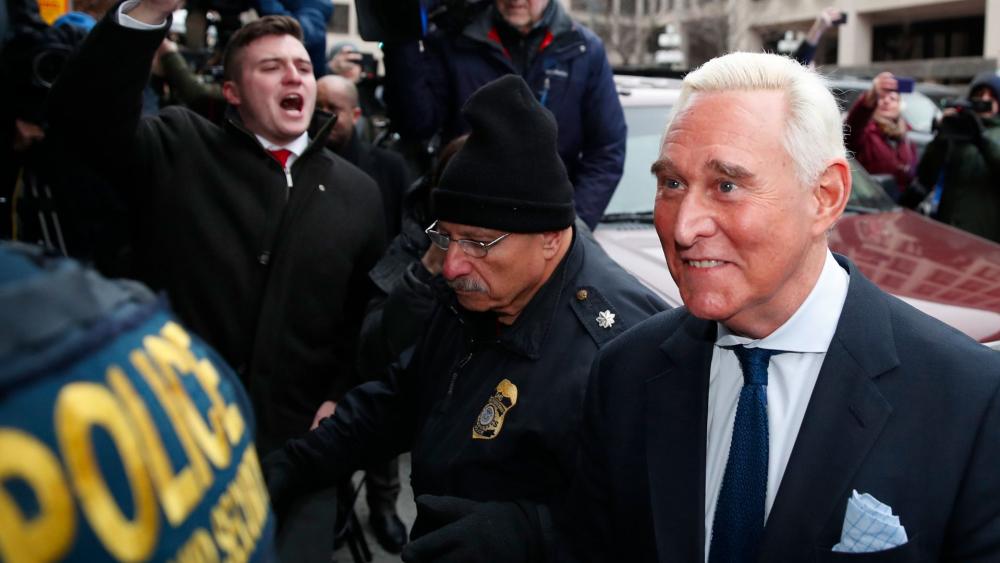 President Trump has used his Constitutional pardoning power to commute the prison sentence of political ally Roger Stone who was found guilty of coverup crimes during the Russia investigation.

Stone had been convicted and sentenced to three years and four months in prison for lying to Congress, witness tampering, and obstructing the House investigation.

Statement from the White House Press Secretary Regarding Executive Grant of Clemency for Roger Stone, Jr.

Roger Stone is a victim of the Russia Hoax that the Left and its allies in the media perpetuated for years in an attempt to undermine the Trump Presidency.  There was never any collusion between the Trump Campaign, or the Trump Administration, with Russia.  Such collusion was never anything other than a fantasy of partisans unable to accept the result of the 2016 election.  The collusion delusion spawned endless and farcical investigations, conducted at great taxpayer expense, looking for evidence that did not exist.  As it became clear that these witch hunts would never bear fruit, the Special Counsel's Office resorted to process-based charges leveled at high-profile people in an attempt to manufacture the false impression of criminality lurking below the surface.  These charges were the product of recklessness borne of frustration and malice.

This is why the out-of-control Mueller prosecutors, desperate for splashy headlines to compensate for a failed investigation, set their sights on Mr. Stone.  Roger Stone is well known for his nearly 50 years of work as a consultant for high-profile Republican politicians, including President Ronald Reagan, Senator Bob Dole, and many others.  He is also well known for his outspoken support for President Donald J. Trump and opposition to Hillary Clinton.

Mr. Stone was charged by the same prosecutors from the Mueller Investigation tasked with finding evidence of collusion with Russia.  Because no such evidence exists, however, they could not charge him for any collusion-related crime.  Instead, they charged him for his conduct during their investigation.  The simple fact is that if the Special Counsel had not been pursuing an absolutely baseless investigation, Mr. Stone would not be facing time in prison.

In addition to charging Mr. Stone with alleged crimes arising solely from their own improper investigation, the Mueller prosecutors also took pains to make a public and shameful spectacle of his arrest.  Mr. Stone is a 67-year-old man, with numerous medical conditions, who had never been convicted of another crime.  But rather than allow him to surrender himself, they used dozens of FBI agents with automatic weapons and tactical equipment, armored vehicles, and an amphibious unit to execute a pre-dawn raid of his home, where he was with his wife of many years.  Notably, CNN cameras were present to broadcast these events live to the world, even though they swore they were not notified—it was just a coincidence that they were there together with the FBI early in the morning.

Not only was Mr. Stone charged by overzealous prosecutors pursuing a case that never should have existed, and arrested in an operation that never should have been approved, but there were also serious questions about the jury in the case.  The forewoman of his jury, for example, concealed the fact that she is a member of the so-called liberal "resistance" to the Trump Presidency.  In now-deleted tweets, this activist-juror vividly and openly attacked President Trump and his supporters.

Mr. Stone would be put at serious medical risk in prison.  He has appealed his conviction and is seeking a new trial.  He maintains his innocence and has stated that he expects to be fully exonerated by the justice system.  Mr. Stone, like every American, deserves a fair trial and every opportunity to vindicate himself before the courts.  The President does not wish to interfere with his efforts to do so.  At this time, however, and particularly in light of the egregious facts and circumstances surrounding his unfair prosecution, arrest, and trial, the President has determined to commute his sentence.  Roger Stone has already suffered greatly.  He was treated very unfairly, as were many others in this case.  Roger Stone is now a free man!