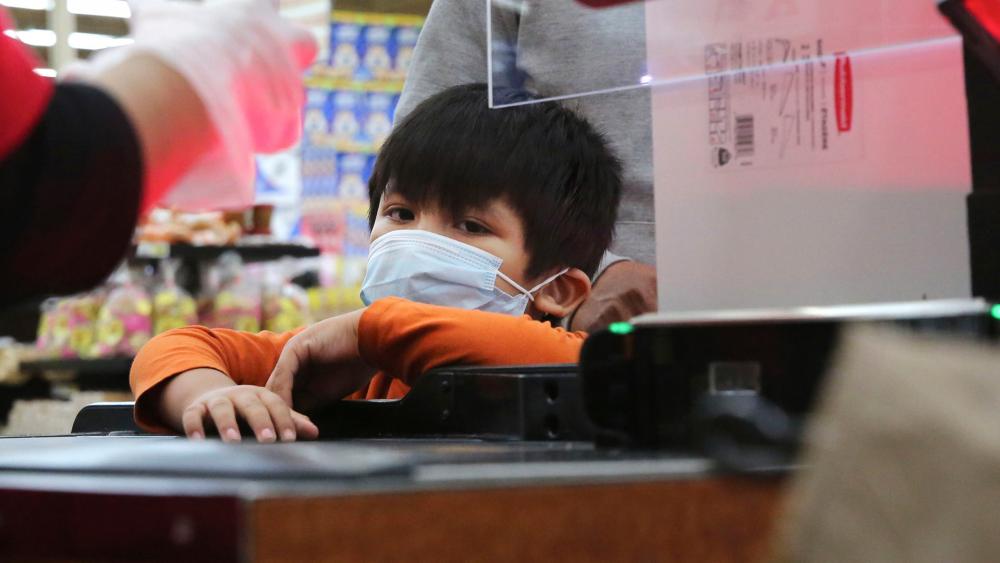 Amid social distancing during the Covid-19 outbreak, a young boy looks on during a transaction with the cashier at El Rancho grocery store in Dallas, March 26, 2020 (AP Photo/LM Otero)
6145213432001

US Now Leads World in Confirmed COVID-19 Cases: 'This Too Shall Pass'

WASHINGTON -  Trump signs a $2 trillion aid package and pledges the government will buy thousands of ventilators as climbing coronavirus numbers paint a bleak picture for the days ahead.

The plan boosts unemployment coverage for the millions of Americans who just lost their jobs as their employers closed down to fight the coronavirus. And most American adults who earn less than $75,000 a year are slated to receive $1,200 aid checks that could start arriving in mailboxes by the first week in April, just in time. The chairman of the Federal Reserve, Jerome Powell, says the economy may already be in recession.

The economic aid comes as the US now leads the world in more than 100,000 confirmed cases of COVID-19, resulting in over 1,500 deaths. At the same time, projected numbers for the pandemic have been revised down.

That glimmer of light comes from the UK. The report from Imperial College London that predicted widespread infections along with two million deaths in the US and reportedly propelled the Trump administration to take serious steps against the virus has been revised down.

Isolation and lockdown measures have changed their projections. Dr. Deborah Birx, with the White House Coronavirus Task Force, says the model never matched the reality on the ground.

"So, when people start talking about 20% of a population getting infected it's very scary, but we don't have data that matches that based on experience," Birx told reporters gathered in the White House briefing room.

However, beyond the models, New Yorkers are bearing the brunt of roughly half of the cases in the US, and The Hill reports the CDC's real-world tracking is raising concerns other cities may face the same problems in the coming weeks.

Dr. Anne Schuchat with the CDC tells The Hill, "I think what we're seeing in New York City and New York state right now is a real warning to other areas about what may happen or what may already be starting to happen...before we ease up on the social measures that are in place."

She declined to name cities likely to see major outbreaks, but there are growing concerns that New Orleans could become the next major epicenter.

Meanwhile, despite reports about shortages, Dr. Birx says ICU beds are still available in New York along with thousands of respirators.

"To wake up this morning and look at people creating DNR - do not resuscitate situations for patients. There is no situation in the United States right now that warrants that kind of discussion," Birx explains.

During the same briefing, Vice President Mike Pence offered a word of hope to the world as the global number of cases exceeds 600,000.

"We grow more confident every day that this too shall pass with cooperation, generosity, and prayers," Pence said.