CDC: Expect Another Round of Infections This Fall - Trump: 'We're Not Closing Our Country' 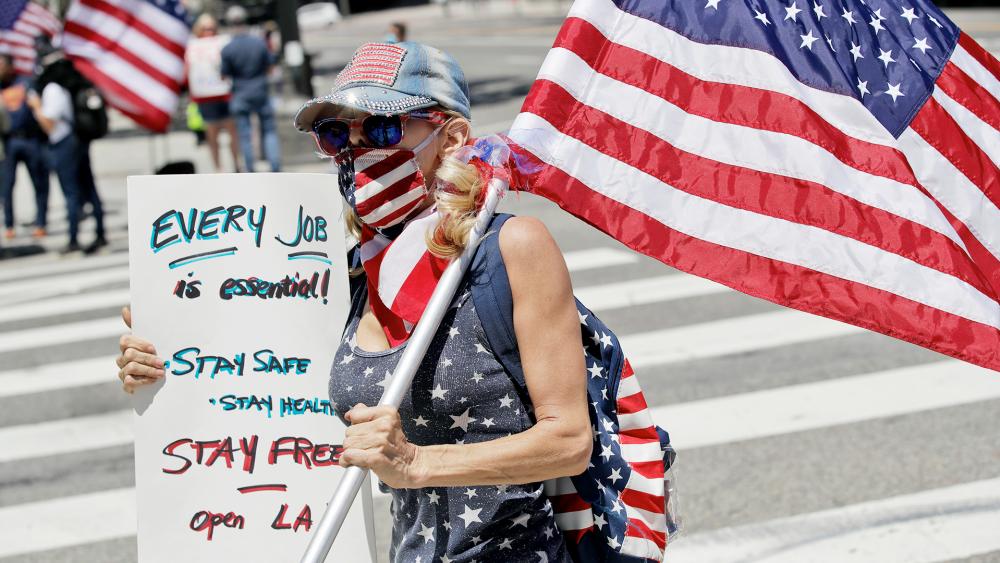 A protester holds a sign during a rally calling for an end to Gov. Gavin Newsom's stay-at-home orders amid the COVID-19 pandemic in downtown Los Angeles. (AP Photo/Marcio Jose Sanchez)
6158566179001
CDC: Expect Another Round of Infections This Fall - Trump: 'We're Not Closing Our Country'

Touring a Ford plant in Michigan Thursday, President Trump said a second wave of coronavirus is anticipated. The CDC expects it to hit when the weather cools down again this fall and winter.

However, the president says it will be handled much differently.

"Whether it's an ember or a flame we're gonna put it out, but we're not closing our country," he told reporters.

Trump says the pandemic proves America must be strong and committed to continue bringing jobs back from China and other countries.

"I want to get our country back to normal," he said before boarding Marine One to travel to Michigan Thursday.

Still, as people return to their daily activities, experts urge vigilance since there are concerns a new wave of cases will emerge in the coming weeks as the economy gradually reopens.

"Now is not the time to tempt fate," says Dr. Anthony Fauci with the White House Coronavirus Task Force.

With all 50 states now reopening, there are signs of the new normal everywhere.

In California, Yosemite Park won't open until next month, but businesses around it that rely on its tourists are opening their doors.

Like many destination towns, the coming months are crucial to their bottom lines.

"This is our peak time. So from Memorial day to Labor Day weekend, this is where we make our money. If we don't have that it's going to put a dent in our local economy," says Jeff Jewett, who owns a store near Yosemite.

And as Memorial Day approaches, the National Parks Service in Washington is preparing for visitors.

"We certainly expect that there will be people who come down to pay their respects on Memorial Day," says Mike Litterst, a spokesman with the parks service.

Still, tensions remain between continuing restrictions out of concerns over more cases and restarting the economy. This as the unemployment rate is expected to exceed 20 percent.

Michigan is one of the hardest hit states and the governor there, Gretchen Whitmer, has issued some of the nation's most restrictive lockdown measures.

She's also been the subject of numerous protests.

Karl Manke is a symbol of that anger. The barber refused to shut down his shop in defiance of the governor's orders and Thursday a judge took his side denying the state's request to shutter his shop.

"I refuse to stand down. License or no license, or whatever it is. I'm 77. I mean, are they going to give me life?" Manke told a local reporter through a chuckle, enforcing his disdain for the governor's order.

The president expects economic numbers to strengthen over the next few months, but if there is another flare up in cases, it will be governors, not the president, who decide how their states react.