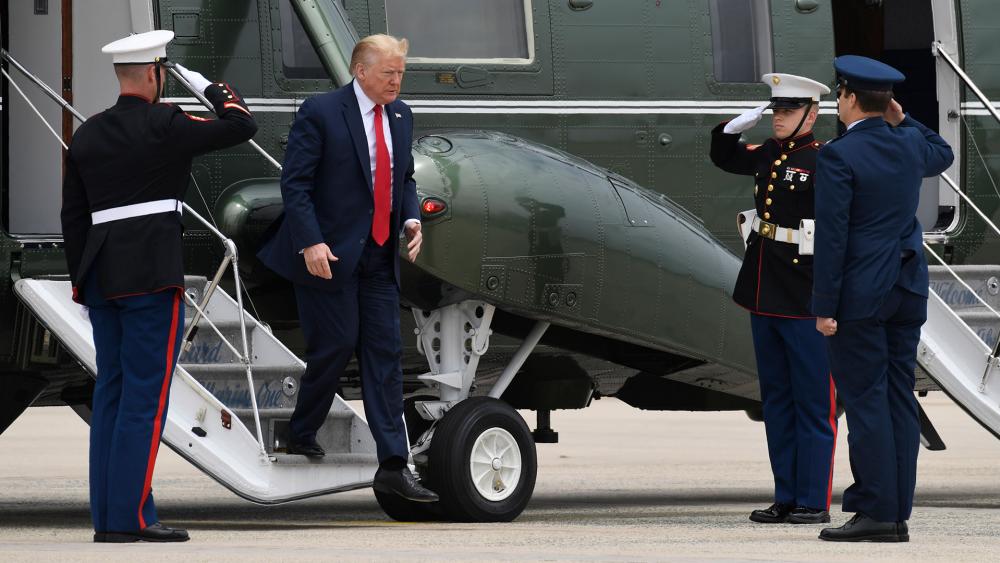 President Donald Trump walks off of Marine One on his way to board Air Force One at Andrews Air Force Base in Md., Thursday, May 21, 2020. (AP Photo/Susan Walsh)
6158397840001
Trump Says He Plans to Take a Strong Position on Churches Re-Opening

"We don't want them to do mail-in ballots because it is going to lead to total election fraud," Trump said.

The President pushed back after Michigan sent ballot applications - not ballots themselves - to registered voters.

Michigan sends absentee ballot applications to 7.7 million people ahead of Primaries and the General Election. This was done illegally and without authorization by a rogue Secretary of State. I will ask to hold up funding to Michigan if they want to go down this Voter Fraud path!

Other states like Nevada are also exploring plans to abandon in-person voting because of health concerns over COVID-19.

"We don't want anyone to do mail-in ballots but if someone has to mail it in because they are sick or live in the White House and they have to vote in Florida and they won't be in Florida," Trump said. "If there is a reason for it that's ok."

While in Michigan, Trump will tour a Ford Plant in Southwest Detroit which converted operations to make ventilators. The President was asked if he plans to wear a mask.

"I don't know, were going to look at it. A lot of people have asked me that." Trump said.

Ahead of President Trump’s planned visit to tour a Ford Motor Company plant, @MIAttyGen @dananessel has sent an open letter asking that he respect the hard work and safety of our automakers by wearing a face covering during his visit.https://t.co/UfjfGN01tj pic.twitter.com/FhCtqYp8wN

The trip comes amid severe flooding in the Wolverine state. Tens of thousands have been forced to evacuate as Trump has promised to send any help needed.

"I spoke with the governor yesterday and we have a very good understanding," the president said.

"He did say if he had an opportunity to go to Midland, would you consider joining me? And I said, 'Of course I would,'" said Gov. Gretchen Whitmer.

All 50 states have now begun to re-open and before leaving the White House the commander-in-chief had this message for people of faith.

"Another thing Is want to do is get the churches open. Churches are not being treated with respect by a lot of the Democrat governors and we are going to take a strong position on that soon," Trump said.