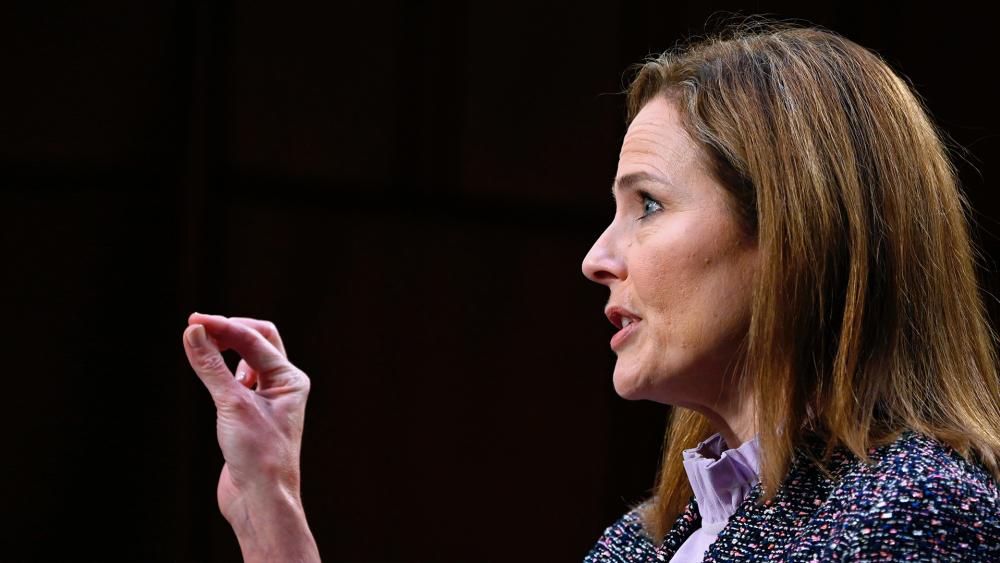 Supreme Court nominee Amy Coney Barrett testifies during the third day of her confirmation hearings before the Senate Judiciary Committee on Capitol Hill in Washington, Wednesday, Oct. 14, 2020.(Andrew Caballero-Reynolds/Pool via AP)
6200769909001
Barrett Almost Through 'Excruciating' Confirmation Process, About to Shatter a Barrier

Amy Coney Barrett weathered the last day of hard questioning by those against her Supreme Court nomination. Meanwhile, her Senate allies suggest her opponents are out of ammo and the Senate will confirm her in the coming days.

As the Senate Judiciary Chairman Lindsey Graham put it at the start of the hearing, “She’s going to the Court.” And then looking across the room to Barrett, he said, “A seat at the table is waiting on you.”

Even so, Judge Barrett soldiered on for another day, being hit by hostile questions, describing the battering confirmation process as “excruciating.”

To Not Face the Gauntlet Would be ‘A Little Cowardly’

When asked why she was willing to put up with that process, she stated, “Other people could do this job, but the same difficulty would be present for everyone. And so for me to say I’m not willing to undertake it even though I think this is something important would be a little cowardly. And I wouldn’t be answering a call to serve my country in the way that I was asked.”

And Democrats still gave it their best shot, suggesting Barrett would be willing to overthrow established decisions like the one which legalized abortion.

When it comes to that ruling – Roe v. Wade – the big question is whether Judge Barrett respects precedent or not.

What she’s said at these hearings is she respects super precedents: cases so settled, no one challenges them anymore, like Brown v. Board of Education which ended segregation in schools.

But that’s not the case with Roe, which has many challenges.

She replied, “That is correct.”

And the chairman added, “I think Sen. Hirono named eight or nine cases that may come up to the Court.”

But the Democrats were accusing Barrett of plotting to also push for rulings that would do away with Obamacare and gay marriage.

Some Marriages to Be Criminalized?

“And in a long line of cases, they would overturn well-settled precedent that I think we have all come to expect,” Delaware Democrat Chris Coons said of such supposed rulings. “So my core concern here is that your confirmation may launch a new chapter of conservative judicial activism, unlike anything we’ve seen in decades.”

Connecticut Sen. Richard Blumenthal was fretting for the LGBTQ crowd: “People who want to simply marry or have a relationship with the person they love could find it criminalized, could find marriage equality cut back. I think it would be an America where I wouldn’t want to live.”

Barrett shot back, “Well, senator, to suggest that’s the kind of America I want to create isn’t based in any facts in my record.”

Democrats brought up the record of the now-deceased Antonin Scalia – Barrett’s mentor – over and over again and suggested she’ll vote just like him on the high court.

An Attempt to ‘Bork’ Barrett

Missouri Sen.Josh Hawley saw that as a sign the Democrats were firing empties.

“I think what we’ve seen today is an attempt at the 'borking' of Amy Barrett,” Hawley charged, referring to what Democrats did when they torpedoed President Reagan's nominee, Judge Robert Bork.

Then turning to Barrett, the Republican said, “The problem is they don’t have anything in your record that they can use to so badly misconstrue to suggest that you’re somehow going to fundamentally change America, that now they have to attribute to you the worst readings and most draconian misinterpretations of Justice Scalia. So we take Scalia’s record, we distort that, and then we attribute it to you.”

Texas Republican Ted Cruz pointed to what he thought was proof the Democrats had given up: they stopped showing up to the hearing.

Looking across to the Democrats’ side of the hearing room, he commented, “It is striking that as we sit here right now in this committee room, there are only two Democratic senators in the room. If you look at the dais, there’s chair after chair after chair that is empty.”

‘I Have Never Been More Proud of a Nominee’

“This hearing to me is not an opportunity to punch through a glass ceiling, but a reinforced concrete barrier around conservative women,” Graham said to Barrett. “And you’re going to shatter that barrier. I have never been more proud of a nominee than I am of you.”

Concerned Women for America’s Penny Nance is presently driving around in a big pink bus with a group of Barrett backers to campaign for the judge’s confirmation.

“She is the person they will be looking to. And what’s so beautiful about that is she’s refused to buy into the old stereotype that you have to choose somehow between having a loving family, having even a large family, and having a career. She’s doing both beautifully,” Nance asserted.

Hawley announced at the end of his time questioning Barrett, “There’s nothing wrong with confirming to the Supreme Court of the United States a devout, Catholic, pro-life Christian. And it would be my privilege to vote for you.”

Graham added, “This is the first time in American history that we’ve nominated a woman who’s unashamedly pro-life and embraces her faith without apology.”

Nance pointed out that now, “There’s a seat at the table for conservative women that has honestly been denied to us before.”