Barrett's Confirmation Fight Not Over Yet: Here's What Happened on the Last Day of Hearings 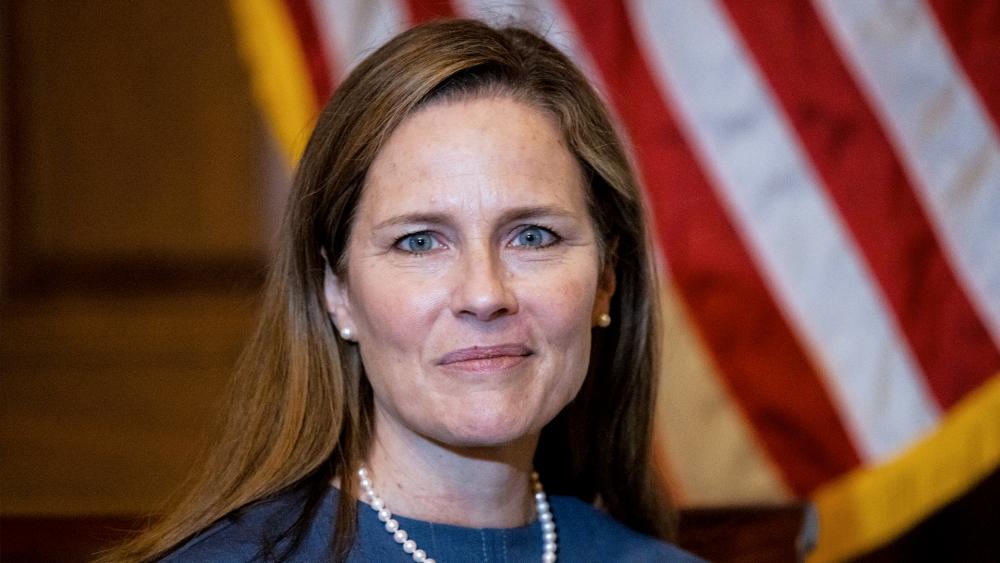 Supreme Court nominee Judge Amy Coney Barrett, Sept. 29, 2020 at the Capitol in Washington. (Graeme Jennings/Pool via AP)
6201702471001
Barrett's Confirmation Fight Not Over Yet: Here's What Happened on the Last Day of Hearings

The Senate confirmation process for Amy Coney Barrett’s Supreme Court nomination is still on track after a week of contentious hearings, but the fight's not over yet.

Now the Senate Judiciary Committee plans to vote on October 22nd, and Senate Majority Leader Mitch McConnell says the entire Senate will take up her confirmation the next day.

That’s not stopping Democrats, though, from fighting to keep Barrett off the Court.

Even at this late date they’re trying to halt the confirmation process in its tracks and are suggesting Republicans have some sort of a moral duty to do so.

As Sen. Richard Blumenthal (D-CT) said at the last day of Barrett’s hearings, “Delaying this nomination is the right thing to do here.”

The Democrats are calling the GOP to follow in Abe Lincoln’s footsteps of not making a nomination when a justice died just weeks before the 1864 presidential election.

As Minnesota Democrat Sen. Amy Klobuchar put it to her Senate colleagues, “And the best precedent that we really have is when Abraham Lincoln was president and it was the closest in time we have had in history to this, when a justice died closest to an election and he (Lincoln) waited till after the election.”

But after Klobuchar said that, Texas Republican Sen. Ted Cruz stated the real reason Lincoln didn’t name a nominee. “The Senate was gone and would not return until December,” Cruz explained. “So there was no Senate physically present to confirm that nominee.”

The moment the Senate returned, Lincoln named a nominee.

Republicans Vote to Move Full-Steam Ahead

After this discussion, Judiciary Committee Republicans voted to move forward with Barrett’s confirmation. “If anybody in the country is ready to go to the Supreme Court, it’s Amy Barrett,” stated Judiciary Chairman Sen. Lindsey Graham.

Texas Republican Sen. John Cornyn looked across the hearing room at his Democrat colleagues and said, “I’m really struggling to find out and understand why Judge Barrett is such a threat to them.”

After the vote to push forward, California Democrat Sen. Dianne Feinstein huffed, “It’s being done to show power and push someone through.”  She added, “It breaches everything that we have held dear.”

“It’s beneath the dignity of this committee,” Illinois Democrat Sen. Dick Durbin declared.

Democrats’ latest objection is that Barrett didn’t disclose seven talks she took part in as a professor years ago at Notre Dame University, one with a pro-life group. Blumenthal said, “Yesterday a CNN report said there are seven more speeches or talks that she has given that have not been disclosed to this committee.”

But the Republican majority was unmoved citing Barrett's repeated assurances that she's not an activist judge and would not interject her personal beliefs into the judicial process.

‘The Myth Is Real’

After the vote to proceed, a witness from the American Bar Association explained to the Judiciary Committee why Barrett received the ABA’s highest rating, reading positive comments she received about the judge.

“One said ‘the myth is real: she has a staggering academic mind.’” lead Barrett evaluator Pamela Roberts read.

Then eight other witnesses appeared, both for and against Barrett’s nomination.

Given recent riots in the streets, former Barrett colleague University of Virginia law professor Saikrishna Prakash shared, “She cares deeply about America.  She does not want to burn the whole place down.”

One of the Democrats' witnesses, a sexual abuse survivor named Crystal Good, told the committee how she went behind her parents’ back at age 16 to get permission from a judge to get an abortion. It’s made her an advocate in her adult years to see restrictions like parental notification removed and access to abortion made easier.

Barrett opponents have suggested the ascending of the judge to the Supreme Court will mean the sure death of Roe v. Wade and legalized abortion. That led Good to tell the Judiciary Committee, “I put my faith in the Supreme Court. And with this nomination, I am losing faith.”

But former Barrett law clerk Amanda Rauh-Bieri told them she believes the judge will be great on the high court.

”As a Supreme Court justice, she would be a role model for generations to come, as she was for me,” Rauh-Bieri testified.

Then Chairman Graham wrapped up the four days of hearings with high praise, saying of Barrett, “I’ve never met a more amazing human being in my life.”