As US Marks 200,000 Dead, Trump Calls on World to 'Hold China Accountable' for Pandemic 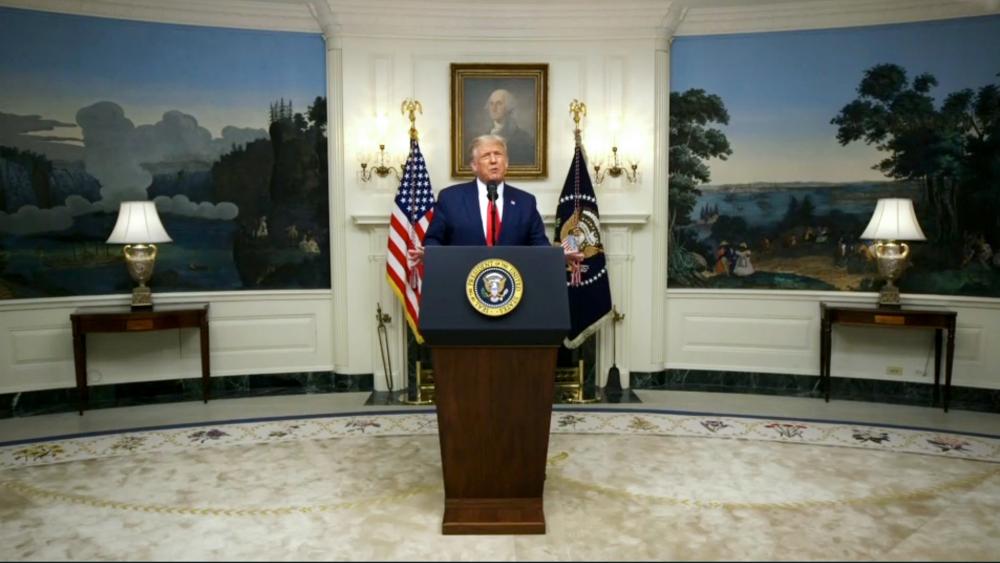 President Donald Trump speaks during 75th session of the UN General Assembly (UNTV via AP)
6193557066001
As US Marks 200,000 Dead, Trump Calls on World to 'Hold China Accountable' for Pandemic

The US marked a sobering coronavirus milestone today. Johns Hopkins University reports that more than 200,000 Americans have now died from COVID-19. Overall, coronavirus cases in the US are declining, but this latest news is yet another reminder of the tragic impact of the pandemic.

Today, President Trump blamed China for its cover-up efforts that allowed the virus to spread worldwide. He used his virtual speech at the United Nations to call out Beijing which he said "unleashed this plague onto the world."

Trump gave a pre-recorded address on Tuesday as part of the 75th annual United Nations General Assembly. The White House has been slamming the Chinese Communist Party for its handling of the coronavirus, along with meddling in elections, spying in the US, and more.

The administration has also condemned the World Health Organization on their poor handling of the coronavirus outbreak in China, and how that allowed the virus to spread.

"The Chinese government, and the World Health Organization, which is virtually controlled by China, falsely declared that there was no evidence of human-to-human transmission," Trump said in his address. "Later, they falsely said people without symptoms would not spread the disease."

"The United Nations must hold China accountable for their actions," he added.

The president also pledged to protect Americans against COVID-19 with a vaccine that will be widely available. "We will distribute a vaccine, we will defeat the virus, we will end the pandemic, and we will enter a new era of unprecedented prosperity, cooperation, and peace," he said.

Not All Bad News - There's Peace in the Middle East

The president highlighted the recent peace deals between Israel and two Arab countries in the Middle East which were brokered by the Trump Administration.

"After decades of no progress, Israel, the United Arab Emirates, and Bahrain all signed a historic peace agreement in the White House with many other Middle Eastern countries to come," Trump declared. "They are coming fast and they know it's great for them and it's great for the world."

"These groundbreaking peace deals are the dawn of the Middle East. By taking a different approach, we have achieved different outcomes - far superior outcomes. We took an approach and the approach worked."

And he emphasized that plans are underway to end the war in Afghanistan, where US troops have been stationed since 2001. The president is planning to reduce the number of troops to 4,000 by Nov. 3.

"As we speak, the United States is also working to end the war in Afghanistan, and we are bringing our troops home.  America is fulfilling our destiny as peacemaker," Trump remarked.