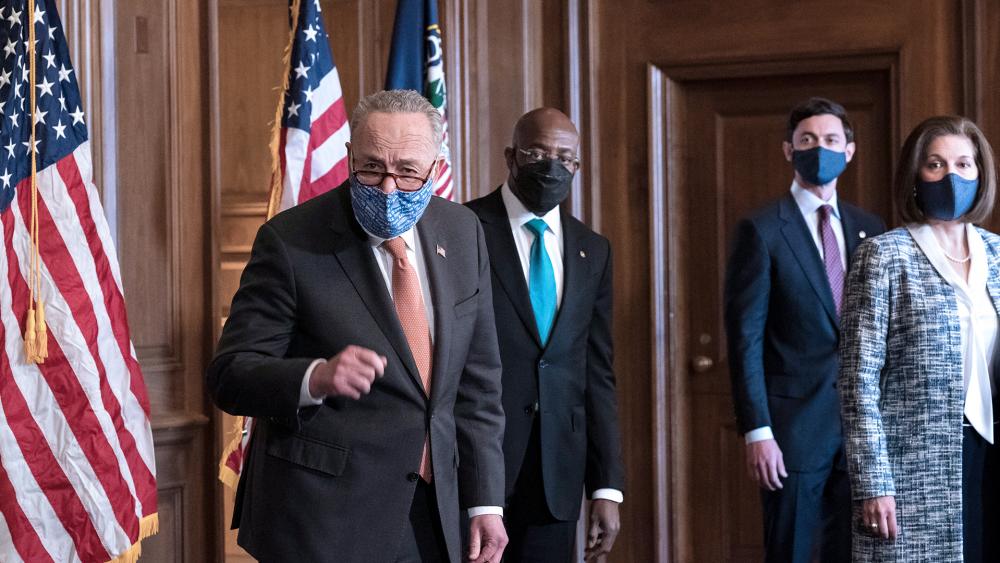 Pretty much in every place in the nation’s capital, the majority rules. The lone holdout is the U.S. Senate, which was created to be a slower, more deliberative body.  The filibuster slows things down by forcing the 100-member Senate to get 60 votes to move ahead on an issue.

In a Senate split 50-to-50, with Vice President Kamala Harris set to weigh in with the tie-breaking 51st vote, one of the only ways the Democrats can pass extremely controversial laws would be to abolish the filibuster, which gives the minority its only way to block those changes.

‘Out of Sync with the American People’

“If the filibuster goes away in a tied Senate, the Democratic Party is able to ram through a radical agenda that is out of sync with the American people, without deliberation, without debate,” said The Heritage Foundation’s Tommy Binion.

At a Heritage webinar, Binion discussed what might possibly pass only if the filibuster goes away.

“Increased federal gun control legislation is on President Biden’s agenda, and it definitely falls into the category of legislation that may enjoy 51 votes but could not overcome a filibuster or extended debate,” Binion explained.

Only Way to Pass the Controversial Green New Deal?

The same goes for amnesty for the millions of illegal immigrants in the U.S. and a hot-button issue like climate control and the multi-trillion-dollar Green New Deal Democrats like U.S. Rep. Alexandria Ocasio-Cortez (D-New York) propose to fight for it.

Binion pointed out, “Climate control legislation enjoys unanimous support on the Left and unanimous opposition on the Right.”

Since the filibuster’s been around for a couple of centuries, Democrats in the past – including new Majority Leader Sen. Chuck Schumer (D-New York) – defended it as sacred.

The Heritage Foundation’s Tom Jipping recalled a few years ago, “Senator Schumer asked his colleagues to ‘protect the sacred checks and balances at the core of the Republic.’”

He also quoted another top Democrat, Sen. Patty Murray (D-Washington), who in the past was part of a minority of Senate Democrats fighting majority Republicans over the filibuster. Jipping stated, “She said ‘This is not about a Senate procedural change. This is plainly and simply a power grab and an effort to dismantle the checks and balances our Founding Fathers created.’”

Jipping explained the filibuster really is a key component of what makes the Senate the more deliberative legislative body. If it’s eliminated, he said, “This is changing the character of the Senate – almost the definition of the Senate -- at least what it’s been for 214 years.”

Even a young Barack Obama, back at the 2005 start of his short U.S. Senate career, wrote, “I sense that talk of changing the filibuster is more about power than it’s about fairness. I believe some of my colleagues propose this rule change because they can get away with it rather than because they know it is good for our democracy.”

Schumer realized this week he doesn’t have the votes to kill the filibuster right now, but won’t rule out trying to eliminate it in the future. He’s hinted at going after it, much like the last Democrat majority leader, former Sen. Harry Reid (D-NV) did.

Schumer: ‘Nothing Is Off The Table’

On SiriusXM’s “The Joe Madison Show” this past August, Schumer said, "We have a moral imperative to the people of America to get a whole lot done, if we get the majority, which God willing we will, and keep it in the House, and Biden becomes President.  And nothing is off the table. We will do what it takes to get this done.”

If that includes wiping out the filibuster and passing red-hot laws by a vote of 51 to 50, Binion fears what it will do to the nation.

Could Use the Pandemic as an Excuse for a Sneak Attack

He stated, “I think it will further divide us, further enflame our country.  And I think that the policy outcome could be devastating.”

Binion – Heritage’s Government Relations vice president – warned the Democrats might do a sneak attack on the filibuster by using something that threatens the American people like the coronavirus pandemic. They may suggest the filibuster needs to be suspended just this once to get emergency legislation through to fight that pandemic.

He said those Democrats might say, “’ Oh, we’ve got to focus on passing this COVID relief legislation.  It is urgent.  It must get done now.  We cannot have filibusters apply to this. No need to worry about ancient Senate rules. We need to focus on this one piece of immediate legislation.’ But the truth is, what’s on the other side of that, the agenda that comes once the filibuster goes away is extraordinarily dangerous and extraordinarily divisive.”