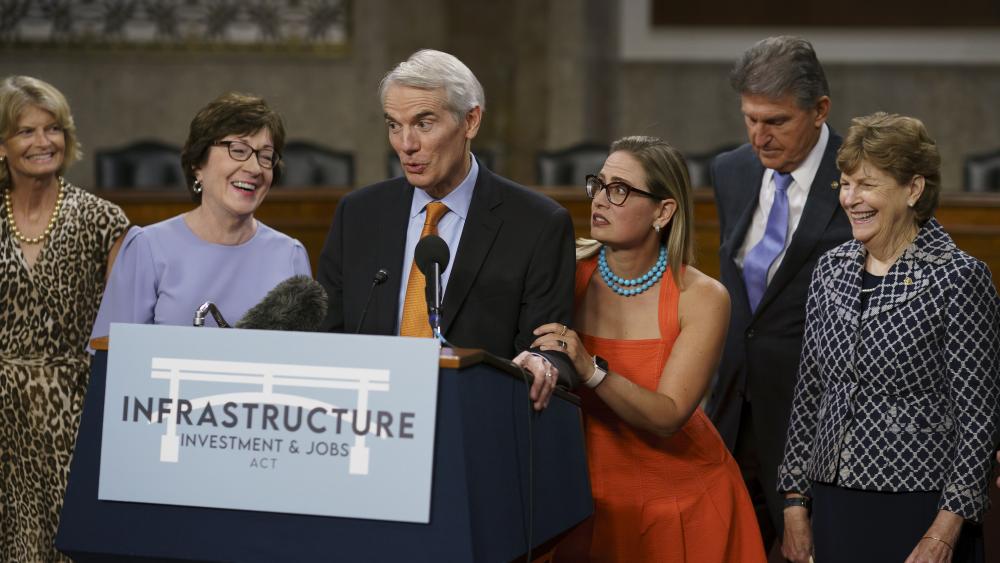 The bipartisan group of Senate negotiators speak to reporters just after a vote to start work on a nearly $1 trillion bipartisan infrastructure package, at the Capitol in Washington, Wednesday, July 28, 2021. (AP Photo/J. Scott Applewhite)

There's been a bi-partisan breakthrough in the U.S. Senate on plans for a traditional infrastructure package.

Seventeen Senate Republicans, including Minority Leader Mitch McConnell, voted with every Democrat to advance a $1.1 trillion package and start formal Senate consideration of the plan.

Some of the main allocations would include:

It's still unclear exactly how the bill will be paid for. The White House says the funds will come from leftover COVID relief money and other measures.

And the GOP wants to partially pay for the huge price tag by tapping $205 billion in unspent COVID-19 relief aid and $53 billion in unused unemployment insurance aid.

There's still a ways to go before the infrastructure plan comes up for a formal vote. More negotiations and a formal debate lie ahead.

Meanwhile, Biden and the Democrats are also planning to push forward with a whopping $3.5 trillion spending package, loaded with far-reaching partisan programs.

Republicans strongly oppose that separate bill, which would require a simple majority vote. And Sen. Kyrsten Sinema of Arizona, a lead Democratic negotiator, has indicated she also thinks the $3.5 trillion price tag is too big.