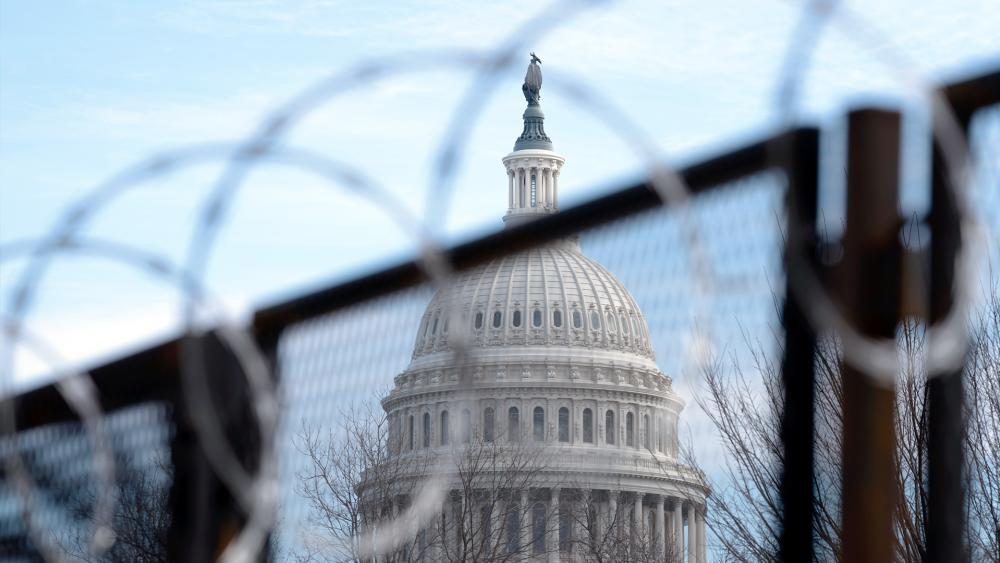 The U.S. Capitol is seen through a fence with barbed wire in February 2021. (AP Photo/Jose Luis Magana)
6237436331001
5 States Lift Mask Mandates and Even This Blue State Just Lifted Restrictions as Senate Takes up $1.9T Spending Plan

WASHINGTON – Senate Democrats are working to push through the president's $1.9 trillion relief package as the number of people getting vaccines accelerates and more states lift restrictions.

"When I leave here today I'm gonna be like, 'Yes, I made it,'" Grace Berry told a reporter as she stood in line for her vaccine in New York.

She's one of the 54 million Americans who have received at least one dose of the vaccine as mass vaccination sites open across the country.

"We're gonna come close if not exhaust our 3,000 vaccine allotment for the day," said Mike Jachles working with FEMA at a mass vaccination clinic in Florida.

Meanwhile, a number of states are lifting restrictions as new cases and hospitalizations have plunged. Gov. Ned Lamont (D) of the blue state of Connecticut announced he's lifting nearly all limits on businesses - returning to full capacity at restaurants, hair salons, and gyms.

"Texans have mastered the safe strategies - they don't need an order from Austin, Texas telling them what to do," says Gov. Greg Abbott (R-TX).

The bill aims to tackle the virus with money for vaccines, tests, and help for schools.

It attempts to nurse the economy by providing direct payments of $1,400 to most Americans.

Senate Majority Leader Chuck Schumer says it's needed to combat the deadly COVID crisis, but Republicans argue that much of the plan disregards improving conditions on the ground and is loaded full of pork.

"This is not a COVID bill – 9 percent of this bill focuses on COVID spending – 91 percent is a partisan wishlist paying off the Democratic special interests that got them elected," said Sen. Ted Cruz (R-TX).

Meanwhile, the federal debt is projected to almost double, ballooning to twice the size of the entire U.S. economy in the next 30 years. And that doesn't take into account this latest nearly $2 trillion spending bill proposed by the president.