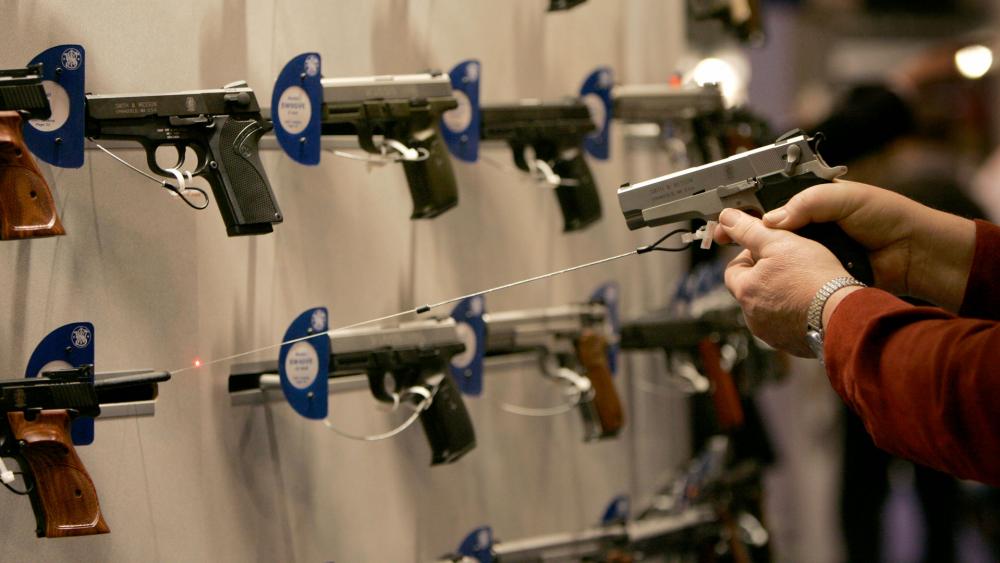 A participant at an NRA Convention holds one of the handguns at a manufacturer's booth. (Image credit: National Rifle Association)
6243212569001
Democrats Vow to Take Action on Gun Control after 2 Mass Shootings

WASHINGTON, D.C. -  Democrats say now is the time to take action on gun control after two mass shootings in the U.S. in the last week.

"I think we're potentially at the dawn on a new era," said Sen. Richard Blumenthal (D-CT) heading into a Senate Judiciary Committee hearing on gun reform Tuesday. "This time feels different. We have a President committed to ending gun violence, a majority in both houses of Congress, and most importantly a growing grassroots movement led by a new generation."

Democrats on Capitol Hill have long wanted stronger gun control laws and specifically background checks. They now believe now this is the time for change to happen.

"I don't need to wait another minute, let alone an hour, to take common-sense steps that will save the lives in the future and to urge my colleagues in the house and senate to act," President Biden said Tuesday.

"The U.S. Senate – I hope some are listening – should immediately pass the two House-passed bills that will close loopholes in the background checks system," continued Biden. "These are bills that received votes from both republicans and democrats in the House.  This is not, it should not be a partisan issue – this is an American issue. It will save lives, American lives, and we have to act. We should also ban assault weapons in the process."

Democrats are also calling for extreme risk laws, where family members and friends could report people they're concerned about owning a firearm.

"These laws allow family members and law enforcement to go to court to get temporary lawful orders to prevent people from purchasing or possessing firearms if they are a danger to themselves or others," explained Sen. Dianne Feinstein (D-CA). "Before each of the tragedies in Tucson, Aurora, Navy Yard, and Santa Barbara, family members and law enforcement saw warning signs but they were powerless to stop the shooter from getting a firearm."

"When you look at the general idea of targeted interventions of people who are showing these risk factors, we're dealing with things that are targeted and not broadly impacting people who are not likely to be a danger to themselves or others," said Swearer.

But on background checks, Swearer warned she does not believe that will fix the problem.

"When you look specifically at mass public shootings, as I mentioned to Sen. Grassley earlier, the biggest problem is that most of these individuals despite warning signs were able to pass background checks and obtain firearms," she argued.

"The Senate is going to debate and address the epidemic of gun violence in this country," said Schumer. "Today our hearts are with the people of Colorado and with everyone whose lives have been touched by gun violence."

Republicans were open to discussing background checks and red flag laws in 2019 but never passed anything. The Democratic leader says this Senate will be different.