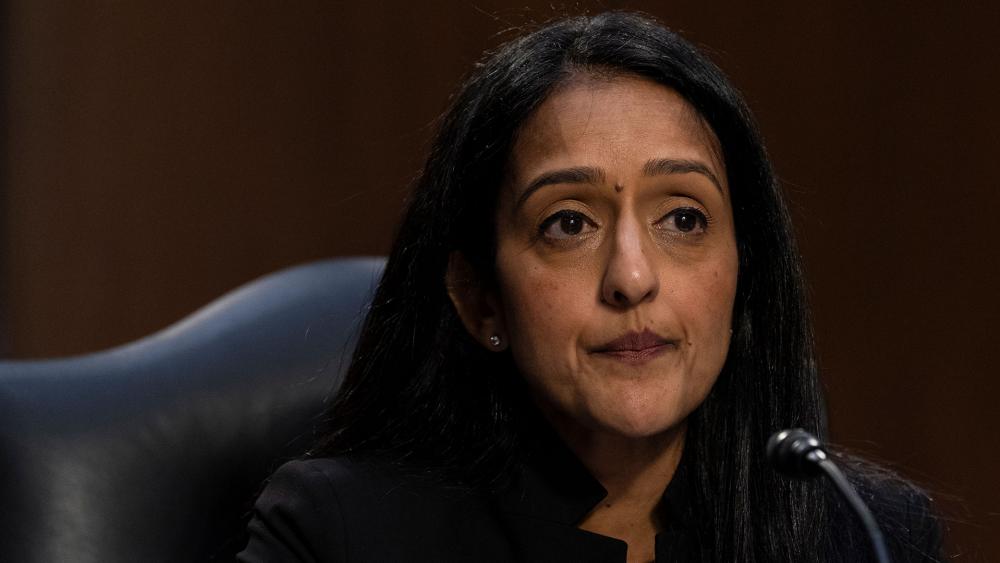 Vanita Gupta, is seated during a Senate Judiciary Committee hearing to examine her nomination to be Associate Attorney General, on Capitol Hill, Tuesday, March 9, 2021, in Washington. (AP Photo/Alex Brandon)

The Judicial Crisis Network is so concerned about President Joe Biden's nominee for deputy attorney general, Vanita Gupta, that it's launched a $1 million ad campaign against her.

JCN President Carrie Severino says Gupta, whose nomination was before the Senate Judiciary Committee Tuesday, is a part of the left's "dark money network" that expects to be rewarded after helping Biden take office.

Also, five attorneys general and more than 100 conservative leaders are calling on President Biden to withdraw the nomination citing her support for defunding police and packing the courts.

On Tuesday morning during Gupta's Senate Judiciary Committee confirmation hearing, ranking member Sen. Chuck Grassley (R-IA) said while Gupta has performed "admirable" work in the past, her past comments about Republicans gave him concerns over whether she could fill a critical Justice Department position, according to Fox News.

"Her Twitter feed has painted Republicans with a broad brush, describing our national convention last year as three nights of quote-unquote 'racism, xenophobia, and outrageous lies,'" Grassley said. "How many of our colleagues in this room were there? Of course, Ms. Gupta has in fact launched Twitter attacks on some of them directly. Will that kind of partisan political advocacy affect her legal advocacy in her role where she represents all Americans?"

The Iowa senator also added that Gupta has also made her opinion known about members of the judiciary, including Supreme Court Justices Brett Kavanaugh and Amy Coney Barrett, who may be handing the cases she would be involved with as a member of the Justice Department.

"I understand why you have them. I take them seriously," she said. "I regret the harsh rhetoric that I have used at times in the last several years. Perhaps, I think, the rhetoric has gotten quite harsh over the last several years and I have fallen prey to it, and I wish I could take it back. I can't, but what I can commit to you and ask that you do is look at my lifelong record."

Matt Whitlock, the former communications deputy for the National Senate Republicans, did just that, tweeting:

Whitlock also included a segment of a June 16, 2020 letter where she said, "It is also critical for state and local leaders to heed calls from Black Lives Matter and the Movement for Black Lives activists to decrease police budgets and the scope, role, and responsibility of police in our lives."

In defending her activism, Gupta says "please look at my full record." Ok:

Opposed religious liberty at every turn
Called for court packing
Said anyone who disagrees with her on enviro issues is "immoral"
Wants to decrease police budgets while weakening sentences https://t.co/vxW6C6EAVz

Gupta is not the first Biden nominee who has had to account for her past partisan attacks against Republicans.  As CBN News reported earlier this month, Biden's pick to head the Office of Management and Budget, Neera Tanden, withdrew her nomination after she faced opposition from key Democratic and Republican senators for her controversial tweets.

Tanden's withdrawal marked the first high-profile defeat of one of Biden's nominees. Eleven of his 23 Cabinet nominees requiring Senate approval have been confirmed, most with strong bipartisan support.