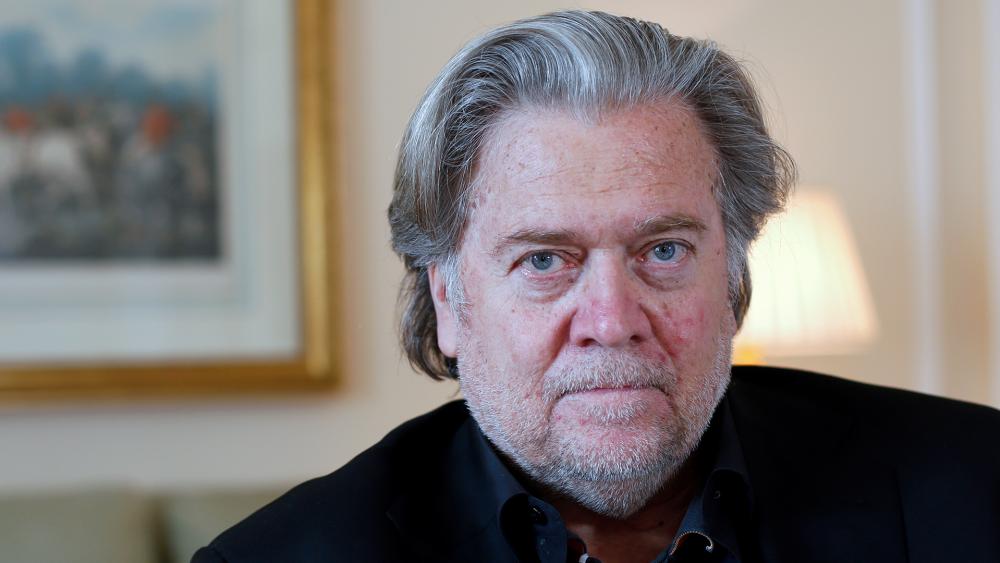 Former White House strategist Steve Bannon poses prior to an interview with The Associated Press, in Paris, May 27, 2019. (AP Photo/Thibault Camus, File)

Steve Bannon, a longtime ally and former adviser to President Donald Trump, turned himself over to federal authorities Monday. He also appeared before a judge to answer charges brought by the  U.S. Department of Justice over Bannon's refusal to comply with a subpoena to testify before the House committee investigating the Jan. 6 Capitol riot.

The 67-year-old was indicted on Friday on two criminal counts. One of the counts charges him with refusing to appear for a congressional deposition and the other is for refusing to provide documents in response to the committee's subpoena.

Each count carries a minimum of 30 days of jail and as long as a year behind bars.

Bannon did not enter a plea during the hearing. Magistrate Judge Robin Meriweather released him without bail but required him to check in weekly with court officials and ordered him to surrender his passport. He is due back in court on Thursday.

The House voted 229-202 to hold Bannon in contempt on Oct. 21 after he refused to show up for a deposition or even engage with the committee as it investigates the Capitol riot.  Nine Republicans joined Democrats to vote to hold him in contempt.

Republicans are accusing Democrats of "weaponizing" the Justice Department against the former Trump administration.

Officials in both Democratic and Republican administrations have been held in contempt by Congress, but criminal indictments for contempt are rare. The most recent notable examples of criminal penalties for not testifying before Congress date to the 1970s, including when President Richard Nixon's aide G. Gordon Liddy was convicted of misdemeanor charges for refusing to answer questions about his role in the Watergate scandal.

The committee investigating the Jan. 6 Capitol riot has subpoenaed almost three dozen people, including former White House staffers. The constitutional protections granted to the executive branch of government are at the heart of the dispute with the congressional committee.

In a related development, a federal court granted an emergency appeal by Trump's legal team to block administration records sought by the House committee. This legal action came after a judge had ruled the documents are not protected by executive privilege.

Meanwhile, new audio reveals President Trump's reaction to the mob in the Capitol building threatening Vice President Mike Pence's life. Some members of the mob chanted "Hang Mike Pence" as Secret Service agents sought to get him to a secure place in the Capitol.

In an interview with ABC News's Jonathan Karl, the former president gave his interpretation of the scene.

Karl: "Were you worried about him, about his safety?"

Trump: "No. I thought he was well protected. I had heard he was in good shape."

Trump: "Because it's common sense, Jon, that you're supposed to protect. How can you? If you know a vote is fraudulent. How can you pass on a fraudulent vote to Congress?"

So far, there's been no response from Pence on those remarks.