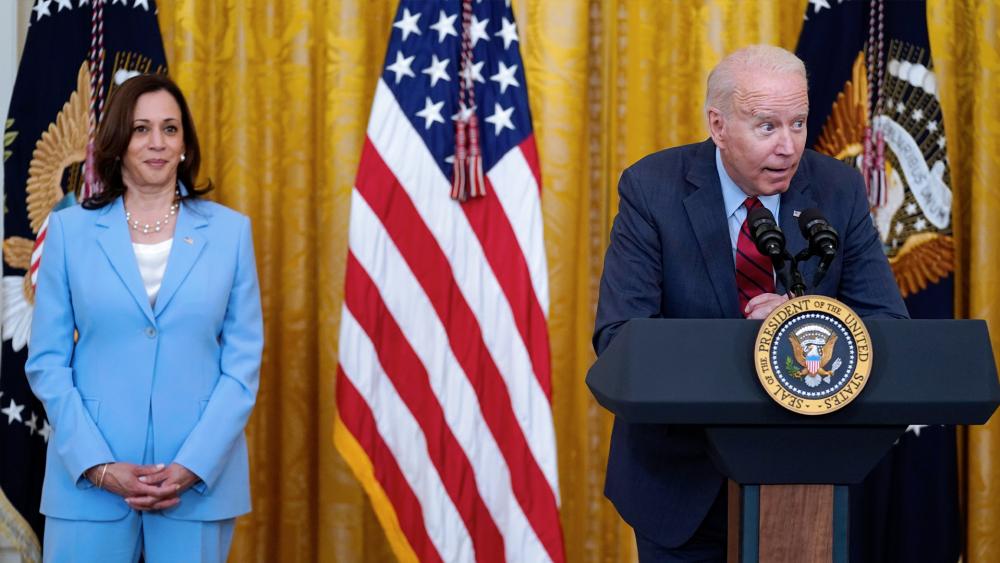 President Joe Biden whispers into the mic in the East Room of the White House, June 24, 2021, in Washington. (AP Photo/Evan Vucci)
6275506410001
'Far-Left Democrats Driving the Bus, Biden Just Along for the Ride': Scary-Expensive Bill to Get a Halloween Vote

Joe Biden's domestic agenda is at a standstill thanks to the Democrats' inability to agree on two massive spending plans: a $1 trillion bill that would fix some roads and bridges, and a huge "human infrastructure" bill that would fund all manner of social programs and fight climate change.

Progressives in the party have vowed not to support one without the other.

Leader of the House progressives, Rep. Pramila Jayapal (D-WA) told CNN, "We thought we made clear three-and-a-half months ago that the two had to move together because we don't want to pit roads and bridges against child care."

But standing in the way of the human infrastructure bill are moderate Democratic Senators Joe Manchin of West Virginia and Kyrsten Sinema of Arizona.

"Three and a half trillion should be a minimum, but I accept that there's gonna have to be a give and take," Sanders said.

A vote has now been delayed until the end of the month and House Republican Whip, Rep. Steve Scalise (D-LA), called Democrat progressives "Big Government Socialists" trying to use a "blank checkbook."

"Nancy Pelosi is now saying ironically that on Halloween, that is going to be the next vote on this package that should be scary to every family in America, Scalise said, "because it would raise taxes that every family would pay, not just the rich, it would kill millions of jobs, it would make us less competitive."

Another roadblock: Progressives say they won't support the massive social-spending package if it includes the Hyde Amendment, which prohibits taxpayer money from funding abortions. In other words, they're willing to block their own bill if anyone tries to stop them from using your tax dollars to pay for abortions.

Meanwhile, Joe Biden is watching this key piece of his domestic agenda go down in flames.

A White House reporter even asked if the infrastructure bills would be signed by Thanksgiving. Biden replied, "I believe I can get this done."

But Sen. John Barrasso (R-WY) said Biden had "...surrendered to the radical wing of his party," and that "Far-left Democrats are driving the bus and Joe Biden is just along for the ride."