FL Gov Suspends State Prosecutor for Refusing to Enforce Florida Laws on Abortion: 'Not on My Watch' 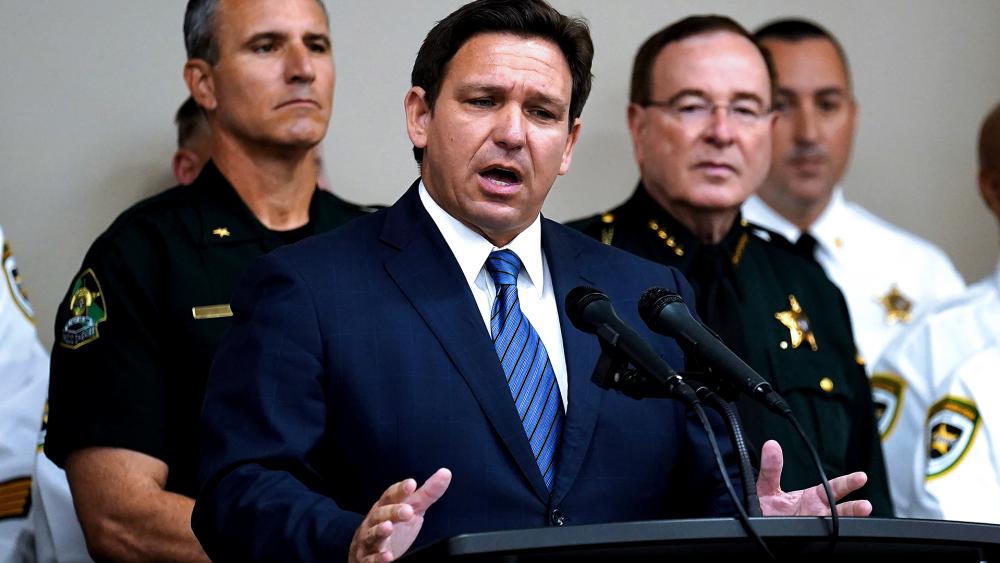 The Republican governor announced the suspension of Hillsborough County State Attorney Andrew Warren, a Democrat, at a news conference in the county's sheriff's office.

"The Constitution of Florida has vested the veto power in the governor, not individual state attorneys, and so when you flagrantly violate your oath of office, when you make yourself above the law, you have violated your duty," DeSantis said at a press conference. "You have neglected your duty and you are displaying a lack of competence to be able to perform those duties, and so today, we are suspending State Attorney Andrew Warren effective immediately."

“I don’t think the people of Hillsborough County want to have an agenda that is basically woke, where you’re deciding that your view of social justice means certain laws shouldn’t be enforced,” the governor said.

Warren was elected as state attorney by Hillsborough County voters in 2016 and in 2020.

In a statement, Warren fired back at DeSantis, telling the governor that he was chosen by the people.

"The people have the right to elect their own leaders — not have them dictated by an aspiring presidential candidate who has shown time and again he feels accountable to no one," the statement said.

He said that no cases regarding violations of the state's new abortion law have been brought to his office.

During an interview with Fox News right after the press conference on Thursday, DeSantis said, "I do think that some of these prosecutors that have very militant agenda in terms of ideology have been able to get away with a lot in other states. … We've had prosecutors around this country that think they can pick and choose which laws to enforce."

Florida's new abortion restriction became effective July 1. It prohibits abortions after 15 weeks, with exceptions if the procedure is necessary to save the pregnant woman's life, prevent serious injury or if the fetus has a fatal abnormality. It does not allow exemptions in cases where pregnancies were caused by rape, incest, or human trafficking.

Violators could face up to five years in prison. Physicians and other medical professionals could lose their licenses and face administrative fines of $10,000 for each violation.

FL Prosecutor was Among 90 Other Prosecutors Who Signed Letter

In a 29-page executive order formally suspending Warren, DeSantis focused heavily on Warren's signing of statements where prosecutors from across the country said they won't use their offices to pursue criminal cases against seekers or providers of abortion or gender transition treatments.

According to DeSantis' order, "in the wake of the Supreme Court's decision in Dobbs, Warren publicly proclaimed in writing that he will not prosecute individuals who provide abortions in violation of Florida's criminal laws to protect life of the unborn child. Specifically, Warren signed a 'Joint Statement' dated June 24, 2022, and updated on July 25, 2022, with other elected prosecutors."

The order included the following sentences, taken from the signed letter:

More than 90 district attorneys, state attorneys general, and other elected woke prosecutors across the U.S. have signed the letter saying they don't intend to do their jobs upholding laws passed by state legislatures to prosecute people for seeking, providing, or supporting abortions.

The executive order also accused Warren of having a "flawed and lawless understanding of his duties as a state attorney" in his "presumptive non-enforcement for certain criminal violations, including trespassing at a business location, disorderly conduct, disorderly intoxication, and prostitution."

Democrats wasted no time in responding to Warren's suspension.

"I'm not going to mince words: this is a shocking political attack on an elected official serving the people of Hillsborough County," she said. "Andrew Warren is being removed because he assured our community that he will not be a foot soldier in Ron DeSantis' extremist agenda."

But Hillsborough County Sheriff Chad Chronister said he supported the governor's move because it was about "law and order."

"The governor's suspension of State Attorney Warren is not political to me. It's about law and order. It's about ensuring our loved ones are safe. It's about the victims and their voices," he said.

The sheriff said Warren has been acting as a kind of "supreme authority by reducing charges, dropping cases and singlehandedly determining what crimes will be legal or illegal in our county."

Robert Jarvis, a professor who teaches Florida constitutional law at Nova Southeastern University's Shepard Broad College of Law, told The Wall Street Journal Warren could choose to appeal his suspension to the state Senate, which then would have six months to conduct a trial. But since Republicans control the state Senate, it is unlikely DeSantis' suspension would be reversed.

Jarvis said Warren could run for office again in 2024. But if he chooses a trial in the Senate, it could prohibit him from running again if it ruled against him.