Strykers, Bradleys Likely in Huge US aid Package for Ukraine 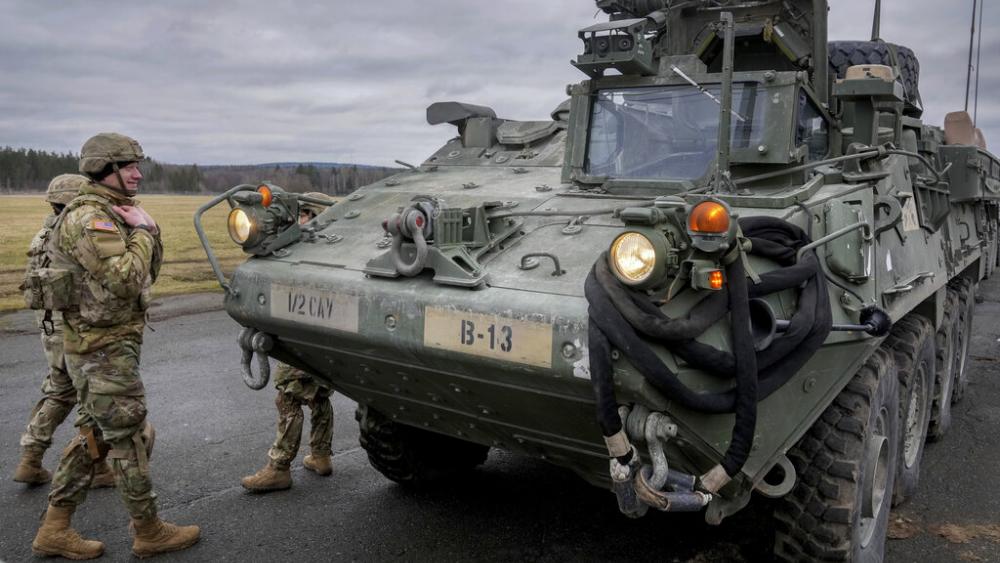 WASHINGTON (AP) — The U.S. is finalizing a massive package of military aid for Ukraine that U.S. officials say is likely to total as much as $2.6 billion. It's expected to include for the first time nearly 100 Stryker combat vehicles and at least 50 Bradley armored vehicles to allow Ukrainian forces to move more quickly and securely on the front lines in the war with Russia — but not the tanks that Ukraine has sought.

The officials said the numbers could change as the Biden administration goes through final deliberations on the package. An announcement is expected this week when defense leaders from the U.S., Europe and other regions gather in Germany to discuss military support for Ukraine. The aid is also expected to include thousands of rounds of ammunition, including rockets for air defense systems.

The officials spoke on condition of anonymity because the aid has not yet been made public.

The decision to send the Strykers, which could be delivered within weeks, comes on the heels of announcements by the British to send Ukraine battle tanks, which have long been sought by Ukrainian leaders. The Strykers and Bradleys are armored personnel carriers.

Under Secretary of Defense for Policy Colin Kahl told reporters Wednesday that a new phase of the war is shaping up as Russia gets more deeply entrenched, and that Ukraine will need mechanized infantry to break through those lines.

“The Russians are really digging in. They’re digging in. They’re digging trenches, they’re putting in these dragon’s teeth, laying mines. They’re really trying to fortify that that FLOT, that forward line of troops,” Kahl said. “To enable the Ukrainians to break through given Russian defenses, the emphasis has been shifted to enabling them to combine fire and maneuver in a way that will prove to be more effective.”

The Stryker can transport a full squad of nine infantry troops and a crew of two. It is equipped with a 30 mm gun, a machine gun and/or a grenade launcher, and can travel up to 60 miles per hour (nearly 100 kilometers per hour). It runs on eight wheels, which makes it more nimble, speedy and fuel efficient than the Bradley.

The first shipment of 50 Bradleys was announced two weeks ago. Known as a “tank-killer” because of the anti-tank missile it can fire, the Bradley runs on tracks, making it more useful in muddy terrain than the Stryker.

The two vehicles serve different purposes. The Bradley brings more firepower but carries fewer troops. The more lightly armored Stryker, because it is wheeled, can move a lot faster on paved roads, meaning it can get infantry squadrons into the fight faster.

Ukraine has for months sought to be supplied with heavier tanks, including the U.S. Abrams and the German Leopard 2 tanks, but Western leaders have been treading carefully. The United Kingdom announced last week that it will send Challenger 2 tanks to Ukraine, but the U.S. and Germany have held off.

Kahl said the M1 Abrams has complex maintenance needs and may not be the best fit.

“The Abrams tank is a very complicated piece of equipment. It’s expensive, it’s hard to train on. It has a jet engine, I think it’s about three gallons to the mile of jet fuel. It is not the easiest system to maintain. It may or may not be the right system,” Kahl told reporters.

“One of the things that Secretary (Lloyd) Austin has been very focused on is that we should not be providing the Ukrainians systems they can’t repair, they can’t sustain, and they and that they over the long term can’t afford, because it’s not helpful.”

Poland has expressed readiness to provide a company of Leopard tanks. But, Polish President Andrzej Duda stressed during his recent visit to the Ukrainian city of Lviv that Poland would only do so as part of a larger international coalition of tank aid to Kyiv.

German officials have conveyed their hesitance to allow allies to give Ukraine the German-made Leopards unless the U.S. also sends Ukraine the Abrams, according to a U.S. official who was not authorized to comment and spoke on the condition of anonymity.

Poland and the Czech Republic have provided Soviet-era T-72 tanks to Ukrainian forces, and France has said it would send AMX-10 RC armored combat vehicles to Ukraine, designated “light tanks” in French.

The influx of tanks and armored carriers comes as Ukraine faces intense combat in eastern Ukraine around the city of Bakhmut and the nearby salt mining town of Soledar. The battles are expected to intensify in the spring.

In addition to the Bradleys, the previous U.S. aid package included 100 M113 armored personnel carriers and 55 mine-resistant ambush protected vehicles, or MRAPS. Those types of armored carriers, along with the Strykers, will better protect Ukrainian troops who are fighting a brutal campaign against Wagner forces, made up in large part of convicts from Russian prisons.

The U.S. Army has a large number of Strykers available to send. Just last year, the Army announced plans to convert its Stryker brigade combat team in Alaska to a more mobile, infantry unit better suited for frigid arctic regions.