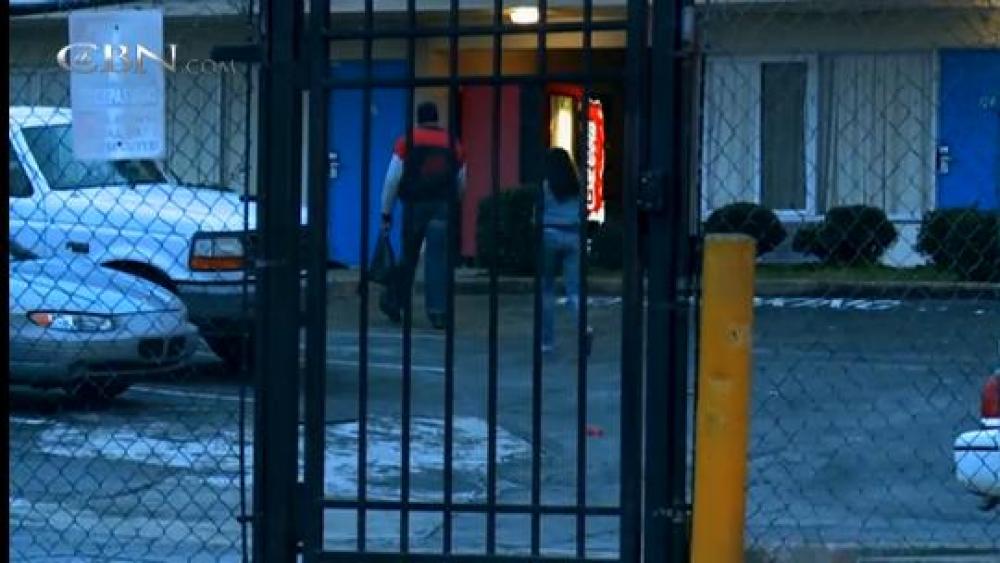 ATLANTA - More than 5 million people live and work in the Atlanta-metro area. Despite the recession, its economy ranks sixth among the nation's cities.

The metro area is also home to a number of Fortune 500 companies and proud of it.

But what it's not proud of is the lucrative business of human trafficking that by all accounts appears to be flourishing.

The Scourge of Atlanta

"A lot of the same things that bring businesses here also bring traffickers here. We are a transportation hub," she explained to CBN News during a recent interview. "It's very easy to fly in and out of Atlanta."

On a recent weekday night, the hellish reality Yates is battling is clearly seen on the streets of at least one Atlanta area neighborhood. Young girls are walking with their pimps, getting into cars, and going off with older men.

Online ads also reveal the hundreds of girls and women being sold on any given night.

"We're also a city that's known, to a certain extent, for the sex industry here, strip clubs and prostitution," Yates said. "And then we have lots of conventions, lots of sporting events, (and) that creates a ready market for victims."

Activists like Stephanie Davis, executive director of Georgia Women for a Change, have been fighting this scourge for years.

"It's something that you just don't talk about," she said. "It's the South. We're living in a culture that's very polite."

But now, a cultural shift is pulling together the faith community, business leaders, and lawmakers to rally around this issue, Davis said.

In the past year it led to a historic anti-trafficking bill that provides tough penalties for buyers and sellers. The state of Georgia has also worked hard to develop an array of services for victims. They even target girls at risk.

Keisha Head, a survivor, works with these girls through programs created by the Juvenile Justice Fund. The fund has developed a curriculum that introduces the girls to the world of commercial sexual exploitation of children. It's also known as CSEC.

"It tells them from the beginning what CSEC is, what prostitution is, what a predator is," Head said. "And these are things that they did not know."

Jennifer Swain, who heads the fund's A Future Not a Past program, said the intent in working with at-risk girls is to help them evaluate everyday situations in their lives.

"I think the best thing you can do is not tell them what to do but teach them how to think, how to make decisions," Swain said.

Out of Darkness is one such group. Its mission is to serve as a rescue hotline for trafficking victims.

Across the city, male and female volunteers are ready to respond at a moment's notice to anyone who wants off the streets.

Since starting in December, Out of Darkness has rescued six women and taken them to recovery services around the city. Founder Jeff Shaw said it's a privilege to help those in bondage.

"When the young lady gets in the car, just the sense that you have a treasure," Shaw said. "You have a precious creation in your car that you're responsible for and that you're ministering to."

Shaw said most victims have the same question for the Out of Darkness volunteers.

Atlanta's business community is also waking up to the issue. Activists say their support is crucial.

"In any corporate culture, it's still very male-dominated and there's a lot of wink, wink that goes on after hours, particularly when professionals are entertaining their clients," Davis explained.

Companies can also make a difference by looking at their supply chain and their vendors' supply chain.

Elisabeth Marchant is an Atlanta entrepreneur and CEO of Womenetics, a networking organization for women business leaders.

She acknowledged that companies that address trafficking may see their bottom line take a hit initially, but she maintains that long-term, tackling the issue makes sense financially.

"They're thinking, 'Well, this is over here. This is a social issue. This doesn't affect my business.' And yet it does because you have employees at risk, vendors at risk, and you have your entire reputation at risk," Marchant told CBN News.

Marchant also said investors are looking for socially responsible companies and employees, especially younger ones, who value the effort as well.

Atlanta's own Delta Airlines has taken a first step by signing an international anti-trafficking agreement known as ECPAT or End Child Prostitution, Child Pornography and Trafficking of Children for Sexual Purposes.

The state's largest hospital, Grady Memorial, and hotels like Radisson and Country Inns and Suites are also training employees to be on the lookout and report any signs of trafficking.

Training for a Second Chance

Also, more than a dozen area corporations have pledged to hire trafficking victims, thanks to a new partnership between Manpower and the non-profit Second Chance Employment Services.

"When they come to us we never really ask how much they know, how much they can do, what their situation is," she said. "But we tell them how much we can help them."

"It's no different in many ways than when we talk to people about putting people with disabilities to work," Herman said.

"The initial fear--'How can we do that, how will they fit in, can they do the job?'" she explained. "And then when they rationalize it, (they realize) this is not about charity, this is about putting people with the skills that are necessary to work."

Such places could better help with their restoration. They could prevent them from returning to the streets and allow them to continue as witnesses in the cases that put those who buy and sell them behind bars.

For more information on fighting human trafficking and how you can get involved, the Center for Global Justice at Regent University School of Law will host a symposium on trafficking, March 29-31, 2012.

Human rights advocates and legal professionals will gather to talk about the best ways to protect children, women, and religious freedom.

For more information contact, the Center for Global Justice Symposium