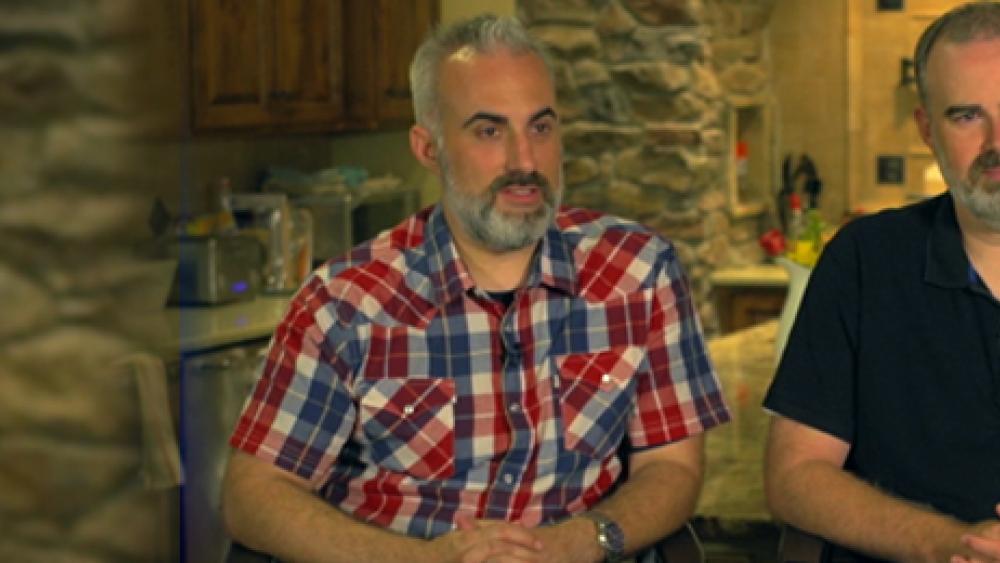 CHARLOTTE, N.C. -- Filmmakers Alex and Stephen Kendrick developed a love for making movies when they were just kids growing up in Georgia.

"When we were growing up we didn't have a television for a while, but our parents would take us to see Disney films," Stephen Kendrick told CBN News. "And so we got excited about wanting to get into filmmaking one day."

The brothers said they were doing stop and go animation and flip books with their Hardy Boy books while at home.

"We got a little stop and go animation 8 mm camera -- I think Alex was in fourth grade at the time -- and then a video camera in our teens when they came out in the 80s," Stephen said. "So it's been part of our lives since the beginning."

The brothers were raised by Christian parents. Their dad was a preacher and their mom was a teacher.

That is why the Kendrick brothers are especially passionate about producing films with a gospel message.

Sherwood Baptist Church in Albany, Georgia, gave Alex and Stephen the opportunity to put their film practice to use by helping with the church's media ministry.

Today they serve as associate pastors at the church.

"We love our church family at Sherwood," Stephen said. "They've been very supportive of us from the beginning."

Their first film called "Flywheel" tells the story of a dishonest used car salesman who comes to grips with his need for God.

It was produced on a bare-bones budget and ran in a local theater in the Kendricks' hometown for six weeks.

The filmmakers went on to write and produce three other films, which Alex directed.

"Facing the Giants," "Courageous," and "Fireproof" have grossed nearly $80 million at the box office, with a combined budget of less than $4 million.

The success of these little-known Christian filmmakers has left Hollywood scratching its head. The Kendricks say prayer is the key to all they have been able to accomplish.

They admit that it makes no difference what level of talent you develop and that ultimately true power comes from God.

"No amount of skill can manufacture the favor of God," Alex said.

"We need the Lord's favor to say I want to bless this film where the Lord says 'I'm going to do things you cannot do in your own power.'"

CBN News was invited on the set of the latest Kendrick film in Charlotte, North Carolina. The movie, known only as "Kendrick Movie 5," encourages Christians around the globe to pray.

"This time it was on the power of prayer and to remind believers that we must not only pray but sometimes do battle in prayer," Alex explained.

Shirer, who makes her big screen debut in the film, told CBN News what it was like working on the set with the sibling filmmakers.

"We have just had a great time -- getting the job done but just being light hearted and fun in the process and to see their patience," she said.

She bragged that, as director, Alex demonstrated extraordinary patience.

"He's shown us what leadership is," she said.

"Kendrick Movie 5" is the first project the brothers have produced under the newly formed Kendrick Brothers Films.

The brothers said they both knew it was time to leave Sherwood, the place where their filmmaking career took off.

"The Lord told us to expand your filmmaking beyond Sherwood's walls and take what you've learned under the leadership of Michael Catt and under the support of the church and try to impact the body of Christ, networking with young Christian filmmakers from across the nation so that they're learning to how to make God-honoring films," Stephen told CBN News.

To feed that growing demand, major studios are taking a leap of faith with biblical epics such as "Noah" and the release of "Exodus" in December and the remake of "Ben-Hur" scheduled for early 2016.

Four faith-based films have already earned more than $50 million each in ticket sales, according to Boxofficemojo.com. Those films -- "Noah," "Heaven is for Real," "Son of God," and "God's Not Dead" -- are among the top 20 grossing films of 2014.

"We're excited to be among them doing that. And so when you hear movies that proclaim God's truth, that proclaim the gospel and do it without compromise, without watering it down, we're cheering them on," Alex said.

Obedient to the Call

The Kendricks said their pastor once told them they're not the first God called to make Christian movies, but they could very well be the ones to respond with obedience to the call.

"We want to be among those God uses and so we wanted to take that step of faith, even when we didn't know what we were doing," Alex said. "And so we've learned so much along the way."

"Kendrick Movie 5" is set to hit theaters next fall.

In the meantime, Alex and Stephen say their focus is not box office numbers but the number of people they can touch with their movies with a message.

"What we try to do with every film that we make is aim it at the Church but include the gospel so those who see the movie but don't have a relationship with Christ will hopefully be drawn to Him," Stephen said.

"We've had thousands of people come to Him as a result of the films," he added. "So it's been very exciting to hear those stories of changed lives."