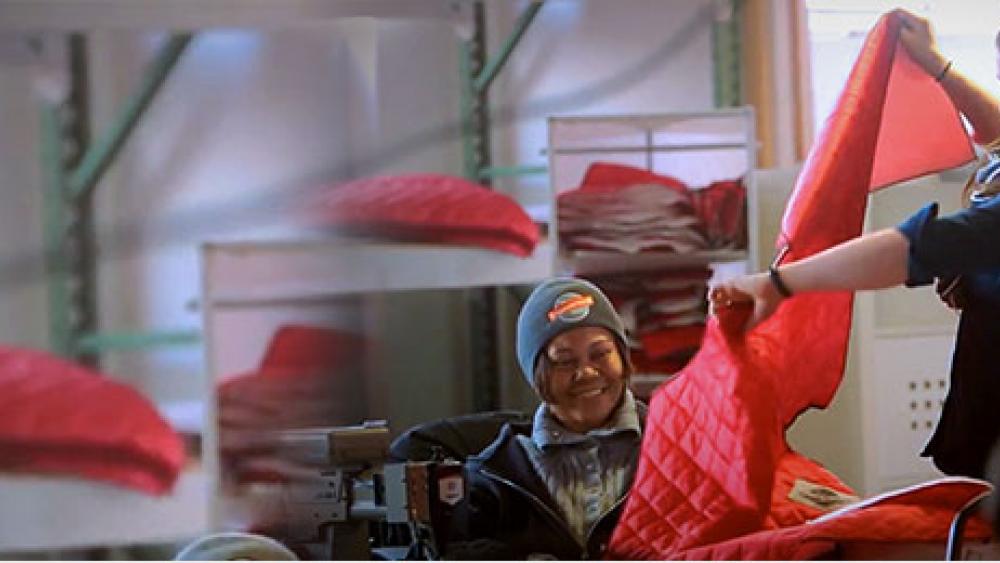 DETROIT -- Everyone knows that winters in Motor City can be harsh and with record breaking snow -- 2014 became one of the worst in years.

The brutal weather is especially hard for the city's homeless.

There are 20,000 homeless people in Detroit and many of them are forced to sleep on the street because shelters are often too overwhelmed and under supported.

Twenty-five-year-old Veronika Scott is making a difference by providing coats that transform into sleeping bags.

Scott said the idea started as a class project when she studied design at Detroit's College for Creative Studies when she was assigned to make something that people really needed.

"The coat was initially meant to be sort of a mobile opportunity to hopefully offer you some comfort and you can control where you're going, what you're doing," she told CBN News.

"It wasn't worn by 10 or 15 people before youit was made specifically new for that person," Scott said.

Perfecting the design was trial and error.

After finally coming up with the right design, Scott took the coats to those who needed them most on the streets, where she even earned a nickname among the homeless.

"I was trying to make this into another semester's project and decided, you know what, a lot of people from the street want these," she explained.

"I was getting strangers coming up to me that had been on the streets 10, 20 years like, 'Yo, coat lady'...or 'Crazy coat girl.' I have a couple street namesI'm very proud of them to this day," she explained, laughing.

One day while vising a local shelter, she discovered that the jackets were just a band aid for a deeper problem among homeless people.

"I was really proud and as I was leaving, this woman tried to stop me and was full-on screaming at me and had to be physically restrained she was so mad. And I was like, 'Oh, why, what happened?" she recalled.

"And I walked up to her, introduced myself and she said, 'You know what you're doing is pointless?  We don't need coats. We need jobs," she added.

That prompted Scott to take her service to a higher level.

More Than a Coat

In 2012 she started The Empowerment Plan, a non-profit that hires previously homeless women to make the sleeping bag coats.

She recruits the women from the same shelters where she handed out the coats.

"We let the shelter know we're going to be hiring and we get 40, 50 people that show up. We're evaluating people not for what's written on paper but for the potential that could be there," she explained.

But she admitted that her idea came with a challenge because none of the women knew how to sew. So she hired a professional seamstress to teach the women the basics.

"It's really like a three-month long intensive teaching process," she told CBN News.

"A month where you're being paid to learn how to sit in front of a sewing machine, they're very intimidating. It's like a car motor attached to a needle. It is kind of scary in the beginning. And work from paper all the way up into fabric. And then slowly work your way onto the floor," she continued.

Scott said everyone she has hired has successfully completed the training program.

Scott's tireless work even earned her a spot on "Forbe's '30 under 30 Social entrepreneurs' list.

But she is quick to point out that all of the hard work is a team effort.

Thankful for My Team

"I did a part of it but it was really them that picked up all the other pieces," she said.

"I'm really lucky to have such an amazing team," she added.

Her employees said they are grateful for a second chance, and a place to call home.

"This opportunity came at, like, the right time, the perfect time, which has helped me tremendously cause now I just closed on my house about a week ago," Kenyatta Caldwell said. "I'm ecstatic."

Twenty-four-year-old Tia Sams has been working at the organization for two years.

"I feel way more independent," she said. "I feel like my mentality has changed a lot and I feel myself being elevated every day."

When Murl Bryant lost her job in 2009, she slept in her car before becoming part of the empowerment team.

She said she now feels blessed to help others who are struggling to make it.

"When I make the coat it makes me think about the people less fortunate than me and to put a smile on their face," she said.

Star Lloyd fled an abusive relationship and ended up living in a shelter with her young daughter.

She said working at The Empowerment Plan has given her life new purpose.

"I really was on the verge of giving up and didn't really care anymore. But working here makes me want to get up and do something with myself, put some clothes on," she said.

"It's a motivational thing for me," she added.

The Empowerment Plan is also meeting needs outside of Detroit by working with other organizations, all because Veronika Scott saw a need and decided to make a difference.

"It's surreal sometimes to look back," she said. "This was all just my class project from years ago."