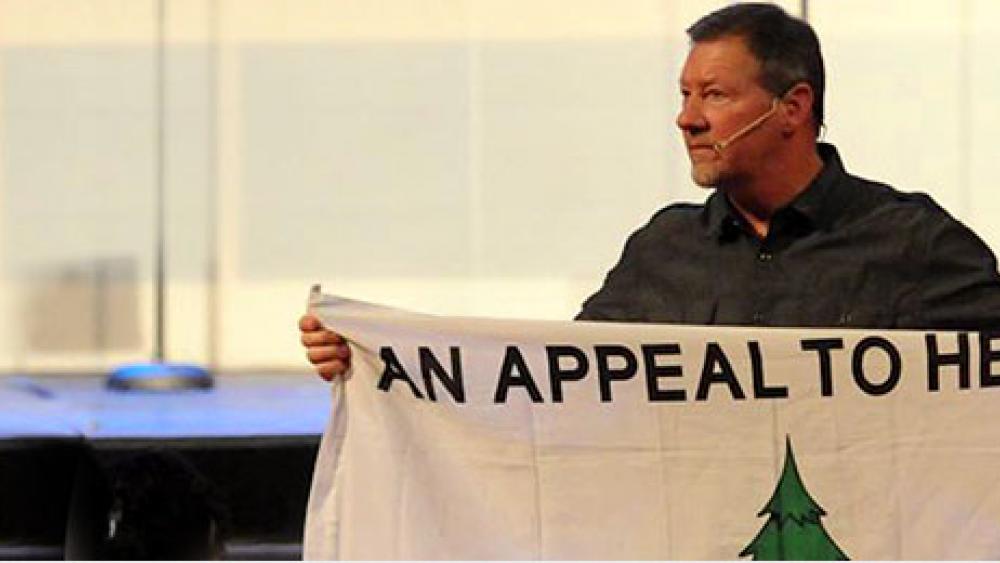 POMPANO BEACH, Fla. -- Christians across America say God is telling them He wants to birth a Third Great Awakening in the land. And He's using intense personal encounters with some Christian leaders to tell them He wants them personally involved.

"I'm going to send a Third Great Awakening to America," Dutch Sheets, author of An Appeal to Heaven, said he heard the Lord tell him a couple of decades ago.

Christian journalist and author Jennifer LeClaire added that she's been hearing it will be "a greater Great Awakening than the world has ever seen."

She writes all about this coming revival and reformation and how to get there in The Next Great Move of God.

In it, she interviews Christian leaders like Sheets and the great revivalist Reinhard Bonnke, who's moved to America because he believes God is about to save many millions here.

But what's interesting about LeClaire and the origins of The Next Great Move of God is that this journalist had for years just been observing the Lord setting up another awakening.

Then He asked her to personally jump in.

"The Holy Spirit said, 'I would like you to be a participant in the revival, not just an observer of it,'" LeClaire recalled.

So she's now bringing together Christians to pray at a Pompano Beach, Florida, facility where she also often writes. She's hoping her new book will inspire many others to also seek the next move of God.

According to Sheets, the path there is Americans re-discovering the deep links their spiritual ancestors had with the Lord. Sheets' own journey to discovering those links was a long, circuitous one that began years ago.

In An Appeal to Heaven, Sheets talks about a prophetic dream a close friend had in 2007 in which God presented Sheets two boxing gloves.

The dream showed Sheets in a boxing ring for five fights against five evil spiritual giants. In each fight, he knocked out a giant with one punch.

"And one said 'Everlast,' and it has everything to do with Everlasting God, who Abraham encountered," Sheets continued. "The other glove said 'Evergreen.' For six years, I couldn't figure out what 'Evergreen' was."

Then in 2013, a dear friend whom Sheets had mentored said God told him to give Sheets a special flag from the Revolutionary War days. Emblazoned on it were the words "Appeal to Heaven," referring to philosopher John Locke's writing that citizens who've exhausted all appeals to unjust leaders can still appeal to heaven.

"What Locke said was 'When there is no other way, there's nothing you can do humanly speaking, you still can appeal to heaven.' And George Washington grabbed this, put it on a flag and flew it over all the naval ships," Sheets said of the "Appeal to Heaven" slogan.

"It spread through all the colonies," he said. "And it really became almost the battle cry of a nation. It was the banner we were born under."

Sheets recalled the awe that hit him when he first saw that the flag carried a huge evergreen tree.

"The Presence of God started coming over me," Sheets told CBN News. "And I said, 'I'm about to get the other glove.'"

His research showed him Everlast and Evergreen first came together when Abraham made a covenant with his "Everlasting God," as described in the Book of Genesis.

"In Genesis 21:33, he wore both of those boxing gloves that were in the dream: he planted an evergreen and called on Everlasting God. This goes all the way back to the father of our faith," Sheets said of Abraham.

"The evergreen tree has been a symbol of eternity and of eternal covenant. Abraham when he called on Everlast, he planted an evergreen tree. It was his way of saying 'I'm in covenant with God forever,'" he explained.

America's first English settlers, before they ever reached the location where they'd build Jamestown, made a covenant with God when the first thing they did was hoist a cross on the Virginia shore.

"When that cross was planted at Cape Henry in 1607, God took that very seriously," Sheets stated.

Then the Pilgrims and Puritans followed, coming across a dangerous sea to live in a dangerous land -- specifically to make a covenant with God, serve Him and be a "shining city on a hill."

"'You've got to go back to covenant,'" Sheets said he heard from the Lord. "'What did I have in mind? Why did I birth this nation? What were the promises made to Me?'"

LeClaire added that concentrating on these covenants and what the earliest settlers and founding fathers did for God and country should drive Americans to their knees.

"When we see and understand the price that they paid and get that revelation of why they did it, and then we see now in today's age what we've lost and what we're about to lose if we don't wake up," she said.

Christians, though, are waking up and beginning to pray fervently for an awakening across the land. Sheets said he sees them everywhere.

"There's nowhere I go where I don't find a core of believers that are passionate, serious, desperate, understanding our true condition." Sheets said. "You have to be blind not to know that America's in real trouble. But they are going after this thing in prayer, and that's where it always starts."

But Christian scholar Eddie Hyatt says an intense encounter with God five years ago in Hyatt's car showed him not to despair.

He told CBN News he was driving down a freeway in Oklahoma when, "I just seemed to be enveloped in God's presence. And my mind began to be flooded with exciting hopeful thoughts that America could see another great spiritual awakening that would change the very culture of the nation."

That night, God led Hyatt to discover that America's First Great Awakening of the mid-1700s heavily influenced the founding fathers who fought the Revolutionary War.

"For the first time I saw that there was a direct connection, a direct bearing between the First Great Awakening and the founding of this nation," Hyatt said.

His studies showed the founding fathers were deeply influenced by what the God of Liberty did in that awakening.

"And out of that came my book, America's Revival Heritage, because we need so much to understand the beginnings and the origins of this nation," Hyatt explained.

LeClaire sees the God of Liberty using that massive spiritual event to plant the seeds in the colonists' heart for their eventual War of Independence.

"There was a tipping point and it led to sort of a spirit that would not tolerate oppression and the attacks on religious freedom," LeClaire said.

She believes now is the critical moment America's Christians must again link up with that spirit.

"I believe God is watching," LeClaire warned. "And I think the decisions we are making in this period are just vital."

Sheets suggested God wants all Christians to grab those boxing gloves and take up that flag.

Sheets said God would tell Americans, "'You were born under an appeal to Me. And when there was no way, I made a way. And no matter how bad it looks today, how big the giants look, if you'll call on Everlasting God and you'll tap into that covenant, He'll take out these giants and you'll see a Third Great Awakening."

If these Christian leaders are correct about just how massive this reformation will be, it suggests America's greatest days may not be behind us, but ahead.