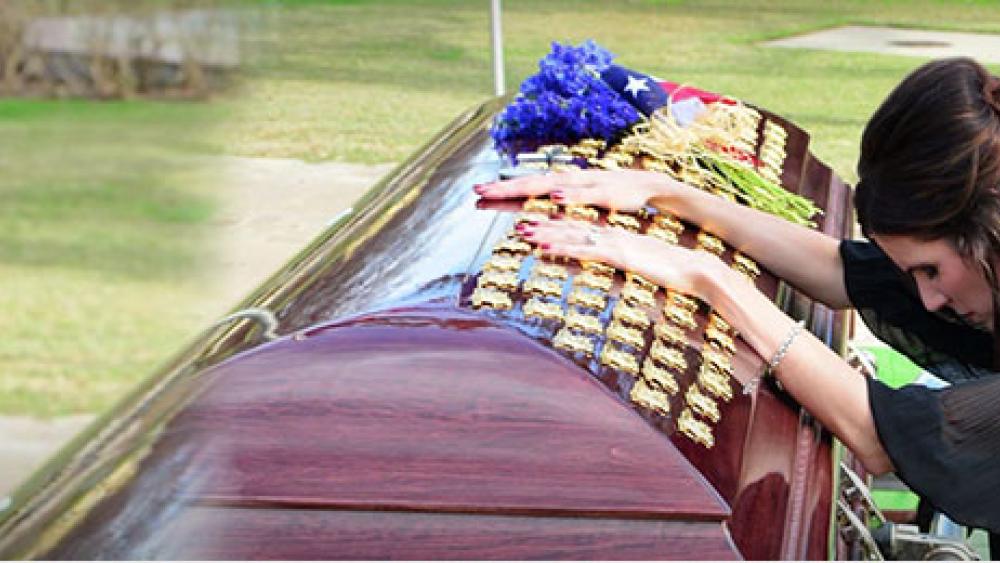 WASHINGTON -- Americans poured into movie theaters in record numbers to see the movie "American Sniper," the story of Navy SEAL Chris Kyle. His astounding success on the battlefield, however, led to difficulties at home and ultimately his death.

Now his widow Taya Kyle is telling the story of her marriage to Chris and how God is blessing her and others through his death.

It's not the life she expected, but Kyle is coming into her own as a sought-after speaker, philanthropist, and author. Her new book American Wife intimately details her life and marriage to "American Sniper" Chris Kyle.

"Hopefully it's meaningful and emotional, but being one step removed it doesn't just rip your heart out, that's certainly not the intention of the book," Taya told CBN News.

In her book, she reveals the ups and downs, the challenges of her marriage. She also includes many of the letters Chris wrote to her while he was deployed.

"He was so unique and I love that part of him that's romantic and kind and soft. And I felt like that's a lot of our veterans and our first responders," she told CBN News.

"These guys have these tremendously big hearts and that's why they care enough to take less money and go out and put their life on the line," she said.

She started the Chris Kyle Frog Foundation, which helps military and first responder families reconnect after a deployment or crisis.

She said it's important to her to focus on strengthening marriages and helping families reconnect after trauma.

"In my experience there was a niche that wasn't quite being met and it's very personal to me because these guys again, and women, they are strong people and they get married," she said.

"They love each other enough to take that on and then they get kind of torn apart by things that are out of their control," she explained.

Finding balance in their marriage proved difficult for the Kyles. Chris deployed shortly after their wedding and just days after the births of their two children.

Each time he returned home it was a difficult transition for both of them.

"When we heal the marriage, you know it says in the Bible -- God first, marriage second, children third. And a lot of times when you are separated for so long, you end up - one of the spouses, whoever is home, is putting the kids first and then trying to put the marriage first. And figuring it all out can be a bit of a mess," she said.

For her efforts and remarkable story, Kyle recently received the Gabby Giffords Award for Courage and Bravery at Fort Myer, Virginia.

"I admire you for serving when it's less than 1 percent of the country that does that," she said before other military spouses when accepting the award. "I admire you, the wives, for being the type of women who are able to stay with their marriage and I know it's not easy."

"I feel like if I can do any good for any wife by letting her know that she's not alone in those moments where you have your fears or you have your disappointments," she said.

She also knows that sometimes military wives can feel un-patriotic. It's how Kyle says she sometimes felt while overwhelmed at home and needing to unload on her husband who was risking his life for his country.

"I really just hope that I can represent you all well," she told the women. "Because I have a tremendous amount of respect for everyone in this room."

When Chris was murdered, grief enveloped Taya. Through it she had to deal with more hardships -- her husband's murder trial and two lawsuits.

One came from Chris's business partners and a second from former Minnesota Gov. Jesse Ventura, who claimed the success of Chris's book, American Sniper, was due to a paragraph Chris included about a fight between the two men.

Although her husband survived so much in war only to be murdered and the aftermath of his death felt so unfair, Taya writes that she never got angry with God.

"Because I feel like, the thing is, God promises free will and people have the choice to do evil," she said. "He doesn't just promise that for one person, it's free will period, it's your choice and so with that he does promise he'll bring beauty through the ashes."

"God knows it's going to happen and I can tell you the ways and the things I feel like he did to prepare me for it, the gifts that I was given beforehand that I can hang on to," she said.

"He was with me during the process of losing Chris and He's with me now to fulfill that promise that there will be bad things that will happen to you while on earth, but 'I will be there and I will turn something beautiful out of it,'" she explained.

For the Kyle's beauty came before Chris's murder. Taya writes at that time her marriage was blissful and in the best place it had ever been. She certainly never thought she would face the gut-wrenching decision of moving her wedding ring to her right hand.

"It's all very foreign to me," she said through tears, "because I feel like you can't even predict grief, you know."

"And that's why I can be hard-headed and driven and that's why the blessing in it is I feel like I've been so broken, that I've had no choice but to trust that God will take care of it. I just have to keep trying to do my best with whatever it is in front of me," she said.

"I'm still struggling with being okay with finding joy, too, because it seems like, you know, it seems like I should never have joy again because I miss him," she continued. "But I know that's not realistic."

"At some point I have to and I have to do it for my kids, too," she explained. "When I say joy, I mean, true joy. We've laughed, we've had fun, we've done fun things but there's a difference between that and pure joy that I used to have more often."

For now, Kyle said she's thankful for the opportunity to try to make a difference and create something beautiful out of the ashes.

"The truth is I couldn't survive it without my faith and if we're open to it when we struggle, we can still see how God will make something good out of it, maybe not what you wanted but still something that's a blessing," she said, smiling.