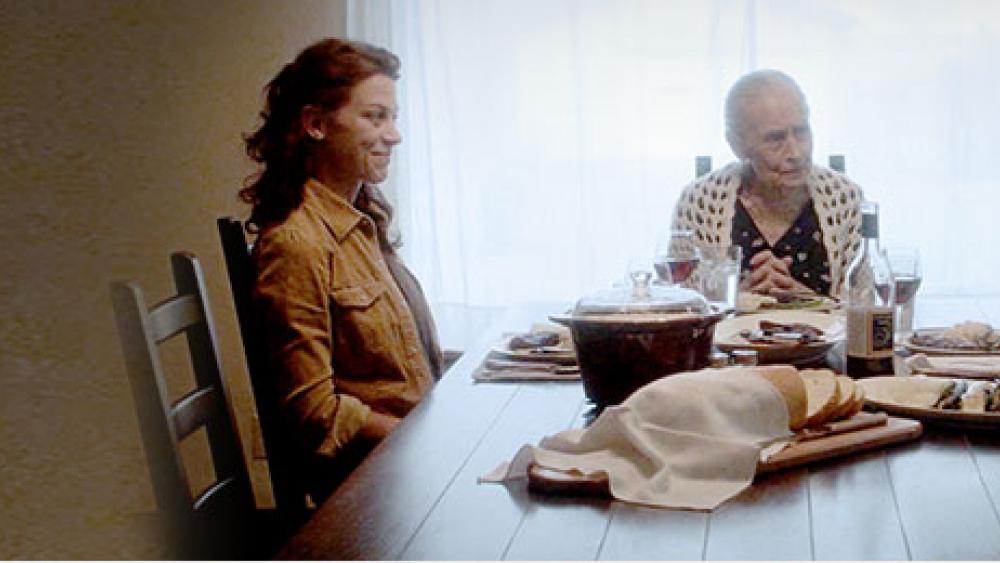 If a movie date is in the works for you this Valentine's Day, you don't have to settle for the much-talked about, R-rated "Fifty Shades of Grey."

There's another movie being released February 13 about love and romance you might want to check out.

It's called "Old Fashioned." CBN's Wendy Griffith spoke with the film's writer and lead actor, Rik Swartzwelder, to find out the story behind the film.

Check out where the movie is playing here.

Swartzwelder plays Clay Walsh, a former frat boy who comes to Jesus and feels so guilty for his past behavior with women that he makes a vow to keep his distance from the opposite sex until the "right" one comes along.

The only problem is that his own "righteousness" becomes a bit of a brick wall to those around him.

When a single woman named Amber enters the picture, things begin to change. Clay runs an antique shop and Amber rents the apartment above the shop.

Bob Waliszewski is director of Focus on the Family's entertainment department Plugged In Online. He is also author of the book Plugged In Parenting. He shared his thoughts on the new films Fifty Shades of Gray" and Old Fashioned below:

Griffith asked Rik what inspired him to write the script for "Old Fashioned."

"I was hanging around with a bunch of singles, and we all loved film and we were dating and trying to fall in love and see if we could find a life partner, someone to marry," he explained. "And we were talking about how none of us, to a person, had ever seen a film that really told our story on screen."

"So the very beginning, the genesis of 'Old Fashioned' for me, was simply trying to tell the love story that other people I knew were experiencing and hoping for and longing for," he said.

In the movie, Clay says he won't kiss his bride, except on the cheek, until their wedding day.

"For Clay it's important because it's his way of staying on the straight and narrow, of trying to make amends for how he has lived in the past," Rik said about why that level of purity was so important to him. "What we can learn from Clay is, however you want to draw those lines, there is wisdom in saying, what we do physically matters and there's a spiritual component to these things."

Are Rik and Clay one in the same?

"Well, any writer, you write what you know and there are certainly elements of the film that are auto-biographical," Rik admitted. "It's not my life story, but I'm definitely borrowing heavily from my own life experiences."

Like his character, Rik became a Christian later in life.

"My moral compass was dictated by MTV and pop culture and I bought into that," Rik explained. "I lived that life out and eventually you go far enough down that road and you realize not only is it a dead-end street, but it's an empty street."

"But when I read the words of Jesus and the life of Jesus and Jesus says, 'Father, forgive them for they know not what they do,' something in me shifted and it's never been the same," he added.

"Old Fashioned" will be released on February 13, the same day as "Fifty Shades of Grey." Rik said he wasn't telling this story as a counterpoint to "50 Shades" or any other book or film.

"I was simply trying to tell a more beautiful love story that took the idea of honoring God and that takes romance and dating seriously," he said. "When we realized the marketing opportunity that was there once our film was done, that clearly was deliberate. It was a unique time to engage the culture in a discussion about love and romance."

Dr. Juli Slattery, co-author of a new book called, Pulling Back the Shades, said although "Fifty Shades of Grey" is a cultural phenomenon, with more than 100 million books sold, it's a dangerous book and movie, and it's one that Christian women should avoid.

"In 1 Thessalonians, it says clearly, 'This is God's will for you, that you should avoid sexual immorality.' And as Christian women we're constantly asking, 'God, would you guide me? Would you bless me? Would you bless my family? Would you bring me a loving husband?" she explained. "By reading Fifty shades of Grey' or things like it, or going to see the movie, you are choosing to take yourself out of God's will," Slattery said.

Slattery also said that "Fifty Shades of Grey" is actually a spiritual book.

"We start with the Garden of Eden, and Satan saying to Eve, 'God really doesn't have your best interest in mind. There's another way to achieve what you want,'" she explained. "How is "Fifty Shades of Grey" not that? It's whispering to single women, to married women, 'What you're experiencing, what God has for you is really second rate. What the world offers is much more fulfilling.'"

"That's Satanic. When we bite the apple, take the bait, we are following the enemy's plan," she said.

"It's not fairy tale-ish," she said. "The main character, Clay, comes from a lot of poor choices and the woman does, too. And it's a story not just of romance but of God's redemption."

Slattery said a lot of women feel a tremendous amount of sexual shame, believing they could never have a pure relationship. But the movie, "Old Fashioned," shows you not only is God's way the best, but God redeems us.

Rik admits that in an age where "hooking up" is practically a national pastime, and reality dating shows encourage kissing as many people as possible, the themes in "Old Fashioned" are completely counter-cultural. But he hopes that his movie will at least get the conversation started.

"Are we engaging romance with respect?" he asks. "Does virtue matter, does honor matter? Does integrity matter? What does that look like for you?"

Is an old fashioned courtship possible in 2015?  Rik believes it is.

"I believe in a God who is revolutionary, who believes that all things come in cycles, and that all things are possible," he said. "And chivalry can make a comeback if enough people want it."

"If we get tired of getting beaten up by our culture and entertainment that wants to reduce us to physical recepticles, then yes, it absolutely is possible," he added. "And I believe a beautiful revolution can happen, but it has to happen in our own hearts."