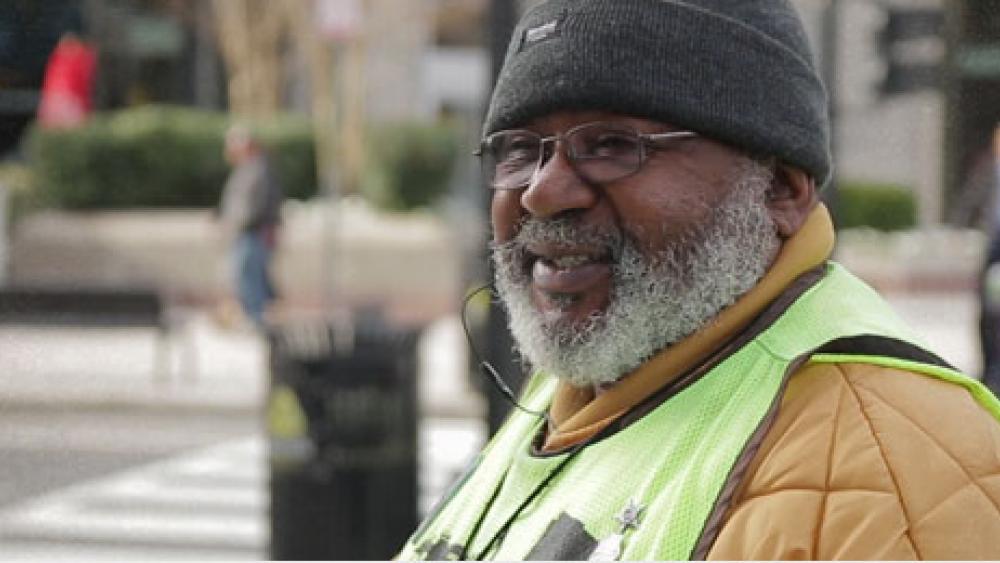 WASHINGTON -- Whether it's raining or the sun is shining, Anthony Crawford can be found selling newspapers at a busy intersection just blocks away from the White House in downtown Washington, D.C.

Much like the motto of a mail carrier working for the U.S. Postal Service, Crawford is dependable -- always ready to deliver a smile and an occasional bear hug for those fortunate enough to know him as a friend.

But it wasn't always sunshine in his life. Less than two years ago, he was down and out living on the streets.

Anthony told CBN News how his life spiraled out of control after his dad died.

"I was out hanging with some friends for New Year's," he explained. "I came home in 1980 and found out he had passed away. My world started passing away from that point."

He started drinking, lost his job and apartment, and drifted around the city from park benches to street corners for 33 years.

He tried panhandling, but that didn't last long.

"I wasn't too fond of that," he recalled. "People look at you like you're not even there."

"The purpose of the paper is to change people's perception about homelessness," Brian Carome, executive director of Street Sense, explained.

The bi-weekly publication features articles about the city's homeless population, who often contribute as writers. Vendors buy the paper in bulk and sell them for a donation of $2.

Marking 10 years as a Street Sense vendor in 2015, Crawford now sees it as a lifeline that has opened him up to a world of opportunity.

"It gives me a chance to meet people I never met before, like doctors, lawyers, professional people," he said.

Finding Friendship on the Streets

He describes one of the people he met, Reed Sandridge, as his best friend. The two met when Sandridge was also down and out.

"I had been out of work for about maybe four or five months when I met Anthony," Sandridge recalled. "Every day I'd go by 19th and M where he works. He'd be there every morning selling the Street Sense paper, and we just became friends."

Crawford credits his friendship with Sandridge for helping him find housing. It took them seven months, but they eventually found him a place of his own.

"Oh my God! It was really undescribable," Crawford recalled. "I had such big smile on my face."

It was also emotional for Sandridge.

"Maybe 20 years he hadn't had a regular place to lay his head," Sandridge told CBN. "To see him make his bed with pride, that really touched me."

Homelessness on the Rise

Crawford is fortunate to have found housing because it's becoming increasingly harder for people like him.

While homelessness nationwide is on the decline, it's on the rise in Washington -- where the local economy is thriving and causing a housing construction boom. But that also means there are fewer affordable housing units, causing the city's homeless rate to jump 13 percent over the previous year.

"A lot of folks are swarming to the city, but that's dramatically driving up rents," Carome explained. "A person would have to be working over three full-time jobs at minimum wage in the city to afford a simple two-bedroom apartment."

While Crawford is grateful to have a roof over his head, those around him believe this is only the beginning.

"The story isn't over with him finding housing," Sandridge said. "This is a long process, and I think housing is the first step."

Crawford says he plans to get his GED and eventually help others as a social worker.

"I want to help somebody come off the streets I came off of," he said.

In the meantime, he plans to keep telling his story and sharing his friendly smile with all who pass by.