T.D. Jakes Demonstrates How to 'Step into Your Destiny' 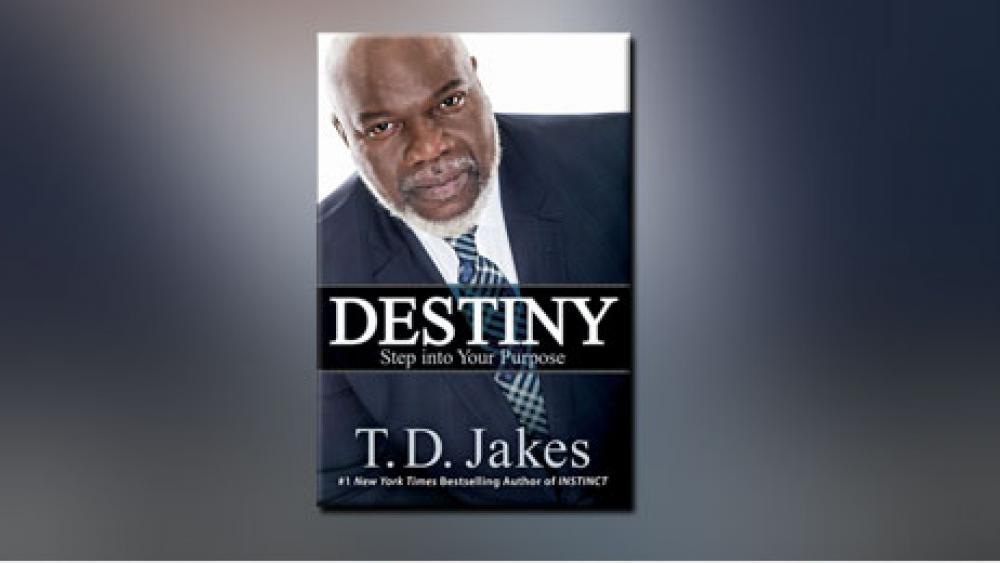 WASHINGTON -- Bishop T.D. Jakes undeniably possesses one of the most recognizable voices. His booming baritone register is as distinctive and unique as his platform as one of the world's best-known preachers.

But Jakes' calling to minister the Gospel of Jesus Christ reaches far beyond the four walls of his 30,000-plus member mega-church complex in Dallas, Texas -- The Potter's House.

To date, he is a New York Times best-selling author, a filmmaker, a humanitarian, and an entrepreneur in addition to being a dynamic preacher.

Yet, by his own admission his prominent rise is an unlikely story. He accepted the call to ministry and started pastoring a small church in West Virginia in the late 1970s.

Today, he's an internationally respected man of faith with tremendous influence across the religious, political, and film worlds.

Jakes credits where he is today to God's grace and finding his destiny, which is the title of his latest book, Destiny: Step into Your Purpose

"Whatever is drawn out of us was first placed inside of us," he told CBN News. "God has intrinsically placed some things in you so you can fit in a particular place of purpose. People are really trying to find their purpose in life, and I wrote this book for that reason."

Jakes believes everyone has a purpose and the God-given tools to fulfill that purpose.

In light of his statement, CBN News asked the seasoned pastor whether he thought Kentucky's Kim Davis stepped into her destiny when she defied a federal judge's order to issue marriage licenses to same-sex couples based on her religious beliefs.

"I don't know [if] that's so much a destiny call as much as it is a personal conviction," Jakes said. "We'll see if it's a destiny call because sometimes you can make a decision, like Rosa Parks made a decision that certainly affected the trajectory of her entire life."

"And, I think it's too early to evaluate what's going to come out of that. But I am so glad that [Davis'] decision was the catalyst of deeper conversation," he said.

Like other people of faith -- from the average Christian to Pope Francis -- Jakes is no stranger to criticism.

"It's okay to be controversial when you're a Christian. It's okay to be criticized. Criticism does not negate the positive things," he explained. "Sometimes you have to cause unrest to bring about change. All of us do."

Jakes sees the best remedy for the increasing attacks on Christian values and people of faith is to counter with a positive response.

"The Bible has warned us before the end time that we're going to have persecution and some things cannot be stopped," he said.

"I think that one of the things we can do as Christians is we can either scream at the darkness or we can light a candle. We can complain about the images and the way we are portrayed in the media or we can get involved in media," he added.

He believes by getting involved, Christians can help change the way others perceive them. It's a tactic Jakes himself has employed, producing films like "Heaven is for Real," "Sparkle," and "Miracles From Heaven" set for release in 2016.

Yet the Dallas-based pastor is also willing to challenge the views of Christians in addition to today's culture. Recently, he has engaged in public dialogue about gun violence, the impact of social media, and mental health issues.

Each of those were factors of the recent shooting massacre at Umpqua Community College in Roseburg, Oregon, where a gunman targeted and killed Christians.

Jakes offered strong praise for the students who were unafraid to identify themselves as Christian.

"We salute the fact that they had the kind of courage to stand up and acknowledge that they were Christians," he said.

However, he told CBN News he questions whether there were others who perhaps did not identify themselves for fear they would be shot and killed.

"There may [have been] people who were Christians who did not have such courage, who now live with the guilt and the grief that maybe I have let God down," Jakes reasoned.

"But the reality is that Peter did that, too, and God forgave him," he continued. "Just because you didn't have that kind of courage doesn't mean that God doesn't have the kind of grace that covers your deepest darkest fears."

The ability to weave compassion into hard conversations and share the Gospel has opened the door for Jakes to take on a new role that will only increase his exposure outside of the Christian church: a television talk show host.

Last summer, he wrapped up a trial run of "The T.D. Jakes Show." The four-week test project aired in limited markets, but Jakes told CBN News that its successful test run has been "green-lighted" for a national launch next year.

Although he admits it initially was a fearful prospect to venture into uncharted territory, he said facing his fear helped him grow to love hosting his own show.

Although he admits it initially was a fearful prospect to venture into uncharted territory, Bishop T.D. Jakes talks about how facing his fear helped him grow to love hosting his own show.

"I loved it. I loved it," he reflected. "To be the first minister to have an opportunity to have a daytime talk show, it's exhilarating."

"To be able to reach a broader audience of people and to convey our messages in a palatable form but still a challenging form that kind of turns the dial a little bit on our culture, for me, this is fun," he said. "To sit down and reflect on all the experiences that I've had in and outside of the church and to present them to the world in a form of solutions that they can use to galvanize them and reconstruct maybe how they feel about faith."