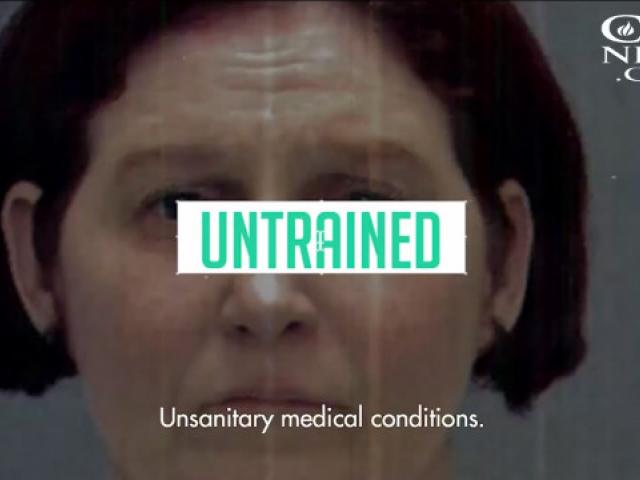 WASHINGTON—Pro-life forces were greatly disappointed this past summer when the U.S. Supreme Court agreed with the abortion industry that, as Justice Stephen Breyer put it, "Abortions taking place in an abortion facility are safe."

A new report from Americans United for Life (AUL) shows years of documented abuse over the past eight years that proves the Court made a mistake, as far as AUL's Deanna Wallace is concerned.

"So what we did is look through thousands of public documents and found that over 227 abortion clinics in 32 states were responsible for more than 1,400 health and safety violations over the past eight years," the staff counsel for AUL told CBN News.

Overall, at least 65 of the clinics examined in "Unsafe: How the Public Health Crisis in America's Abortion Clinics Endangers Women" are chronic offenders, cited for the same health and safety violations multiple times.

Violations at clinics include offenses like not maintaining  safe and sanitary conditions, using unqualified staff to care for patients, and using expired medications and medical supplies.

Wallace cited late-term abortion provider Kermit Gosnell's clinic as an example of how bad things can get. Gosnell is now in prison for murdering babies born alive after the abortion procedure failed to kill them. Before Gosnell's trial, a woman died in his clinic because a stretcher for her couldn't fit through its hallways. Infections were spread because of unsterilized medical instruments. Parts of aborted babies were stored in cat food cans.

AUL points out more than 400 women have died getting abortions since the Supreme Court legalized the procedure nationwide in 1973.   And thousands have been injured.

In Unsafe, Wallace said, "we highlight 11 different cases from the past eight years: women that died in abortion clinics; women that were permanently injured."

Among those 11: Tonya Reaves, whose uterus was lacerated during an abortion at a downtown Chicago Planned Parenthood. The procedure started at 11am, but Reaves wasn't transported to a hospital till 4:30pm.

Another woman who died was Jennifer Moribelli, who began to suffer massive internal bleeding, but didn't know it because she couldn't reach her abortionist to ask him what was happening to her.

It was reading about a girl named Deanna Bell that led Wallace herself into the pro-life movement years ago.

"She's a 12-year-old little girl that passed away in an abortion clinic in Philadelphia that hadn't been inspected in about 18 years," Wallace stated.  "And to me, that's when I first started thinking about whether we were doing enough to protect women when they went into the clinics."

Abortion-backers like to say the procedure is "safe, legal and rare."

"The only one of those three things that is actually true in the American abortion industry is that abortion is legal," Wallace shot back.  "It's not rare.  We know that there are more than 1.2 million abortions every single year. And we know that it's not safe."

AUL's new report Unsafe provides the evidence. Those interested in reading it can get it at unsafereport.org (LINK) where they'll also find an opportunity to petition state legislatures, attorneys-general and governors to do more to regulate and inspect the abortion industry.