Franklin Graham: 'We're on the Precipice of Anarchy' 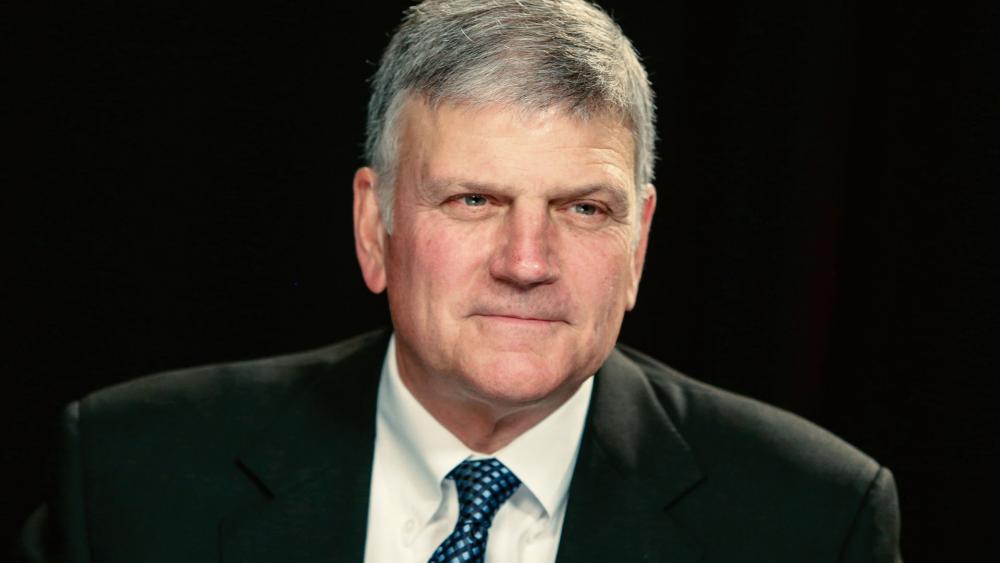 A nationwide return to God is America's only hope for the future, evangelist Franklin Graham said in a Facebook Live prayer event before the start of the Republican National Convention.

"This nation -- it needs a spiritual healing from Almighty God," Graham said before praying. "Our country -- I don't have to tell you -- is in trouble... And the only hope for this country is God. It's not the politicians. It's God."

Graham is hosting prayer events before both parties' conventions.

Graham said America has been running away from God.

"We have taken Him out of the education system, and our country is beginning to implode," he continued. "We're on the precipice of anarchy."

"It seems as though our country is just unraveling," he said, citing the violence in Baton Rouge, Dallas, and Orlando. "We are losing God's blessing; we're losing His hand of protection."

In addition to discussing the United States as a whole, Graham also talked about American leadership.

"We need a president who believes in God and respects God and God's laws and His commands and His decrees. How important that is," he said.

Graham also spoke about the importance of prayer.

"We know that God hears the prayer of one righteous person," he said. "Can you imagine if two or three people are gathered together in His Name? The Bible says that the Lord is right there in the midst of us."

"But can you imagine if there's hundreds of us right now, or maybe thousands, maybe even tens of thousands who are praying that God will hear our prayers and answer our prayers?" he asked, before leading participants in prayer.

At the writing of this article, Graham's Facebook prayer event had nearly 1 million views and growing.

"Our Father and our God, we come to You today to thank You for Your grace, mercy, and bountiful provision," he opened the prayer. "No nation on earth has been blessed as much as the United States of America. We praise You today, and we give You the glory."

"We remember the words of Your Son, Jesus Christ, who said, 'What should it profit a man (or a nation) if he shall gain the whole world and lose his own soul?" Graham prayed.

"Father, we're guilty of bowing down to the false gods of materialism, sensual pleasure; we've legalized the killing of children in their mother's womb; we've legalized same-sex marriage, and Father I know that this grieves Your heart. As a nation and as a people, we seem to be in danger of losing our souls," he continued.

"Who can save us? There's only one, and that is Your Son, Jesus Christ," he prayed. "He alone can comfort and heal the human heart. He alone can forgive sin and give a new life through faith in Him."

Graham went on to pray for wisdom on how to help those struggling with poverty in the United States. He also prayed for those seeking justice.

"We know that there are millions who feel that the justice system in this nation is stacked against them, that their voices are not heard," he said. "We know that you're a just God, a loving God, and we ask that You show us how to fix the inadequacies of our legal system that are stacked toward the rich, the affluent, and the politically connected, and tilted away from the poor and the downtrodden."

Graham also lifted up our leaders to the Lord.

"The problems of this world cannot be fixed by governments alone," he prayed. "We need You to guide and direct our leaders."

"We pray now for the delegates as they are gathering there in Cleveland at this great convention, that You will humble their hearts, that they will look to You for wisdom and guidance," he continued.

"We especially want to pause and pray for those who will be nominated this week for president and vice president of the Republican party for the nation, for Donald Trump, for Gov. Mike Pence," he prayed. "This has been a long journey, Father. There is so much division that has come into this political season, and it has shaken the Republican party to the core."

"And Father, it needed to be shaken," he continued. "Our political system has become corrupt. I pray that Donald Trump and Gov. Mike Pence will surround themselves with Godly men and women."

"We ask that You would guide them and the political leaders of this Republican party and across this country with Your wisdom from on high," Graham said.

The evangelist also prayed for the protection of all candidates running for public office this election season, both Democrats and Republicans.

He also prayed for the safety of law enforcement officers working in Cleveland at the convention and around the nation.

In addition, Graham prayed for the election.

"My prayer, Lord, is that you will lead the American people to choose a president who can bring about real change, racial healing, and prosperity to all Americans," he said. "My prayer is that we will be one nation under God, who can truthfully say once again, 'In God we trust.'"

"We thank You, Father; we thank You for hearing our prayer, and we pray this in the Name of Your Son, the Lord Jesus Christ, Amen," he concluded.

Graham will hold another live prayer event on Facebook next Monday, July 25, before the start of the Democratic National Convention.