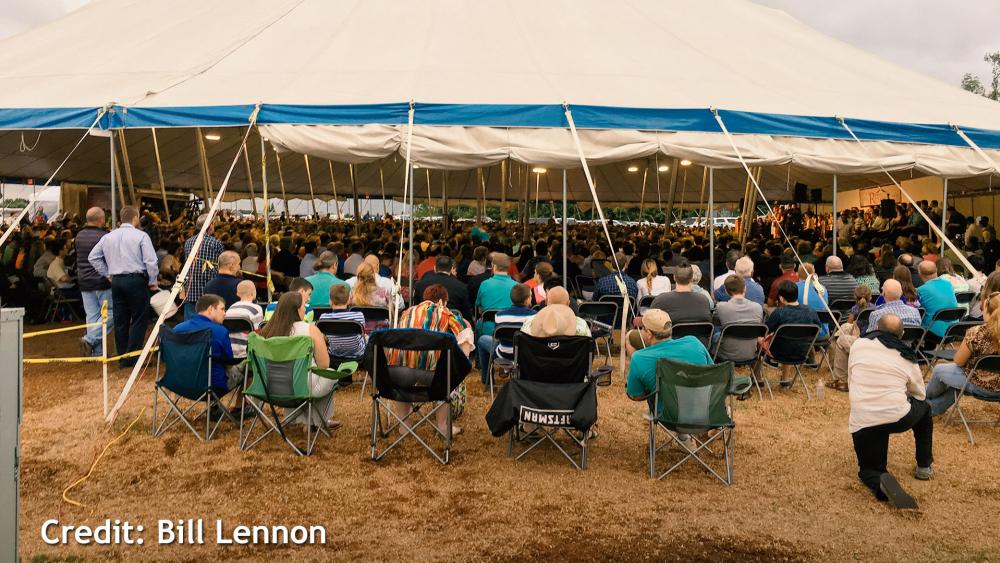 In a state facing attack, God is on the move. Crowds have been meeting under a huge tent since early May.

After a brief break in mid-July, the services are back up and running.

Pastor Randy Hobbs of New Hope Baptist Church, where the Burlington Revival began, told CBN News the meetings are averaging around 2,500 people each night. In June, they held a Youth Night, and more than 5,000 people showed up.

CBN News returned from covering the Burlington Revival. Watch highlights and hear from Pastor Randy Hobbs, Evangelist C.T. Townsend, and people who have experienced the saving power of God.

The revival began on Mother's Day. The church began a one-week revival, and as it neared the end, Hobbs and Evangelist C.T. Townsend sensed that God wanted to do more.

"It's just amazing to be a part of this. This is something we've been praying for in our church for several years," Hobbs shared. "We had been meeting over 15 years, praying for revival to touch us locally and nationally."

The revival outgrew the New Hope sanctuary and eventually moved to a tent. Local businessman Don Cox allowed the tent to be put up on his property.

"It's been absolutely amazing," Cox said. "The last time I remember anything remotely similar to this happening was in August of 1951 when I went to a tent meeting in Greensboro, and a young evangelist by the name of Billy Graham was speaking."

"In my wildest imaginations, I would never have thought that God would have done what He's done," Townsend said. "Every night I lay my head on my pillow and just stand amazed at what God is doing."

People from around the country are attending, and hundreds have accepted Jesus Christ.

"I haven't been in church in over 11 years until five and a half weeks ago. And every Sunday and Wednesday, my daughter would go down to the altar and pray for Daddy and Mommy to get saved," Harrison said, as tears welled up in his eyes. "God answered that little girl's prayer. I believe it with all my heart."

Harrison accepted Christ under the ministry of Townsend.

"We talked about it a little bit, and I said, 'Do you think that Jesus is talking to you about something?' And she said, 'I want to be saved,'" Caudill shared with CBN News. "I'm grateful and I'm thankful that my children get to see this 'cause I think that they'll know -- they'll always know that God is real."

Townsend said the location is attracting people who were just passing through with no intention of going.

Social media has played a big part in getting the word out. The Burlington Revival Facebook page has accumulated 7,158 likes and is filled with pictures and videos showing the mass audience under the tent.

Watch a clip from the Burlington Revival Facebook page here:

Pastors are coming together in unity. On Friday, June 17, the revival team posted on Facebook: "311 preachers under the tent tonight! Help us pray for tender drawing of the Holy Spirit. ‪#‎burlingtonrevival."

Townsend and Hobbs believe prayer is the key to the ongoing revival.