Moms and Dads: Here's How to Get Your Pre-Kid Body Back 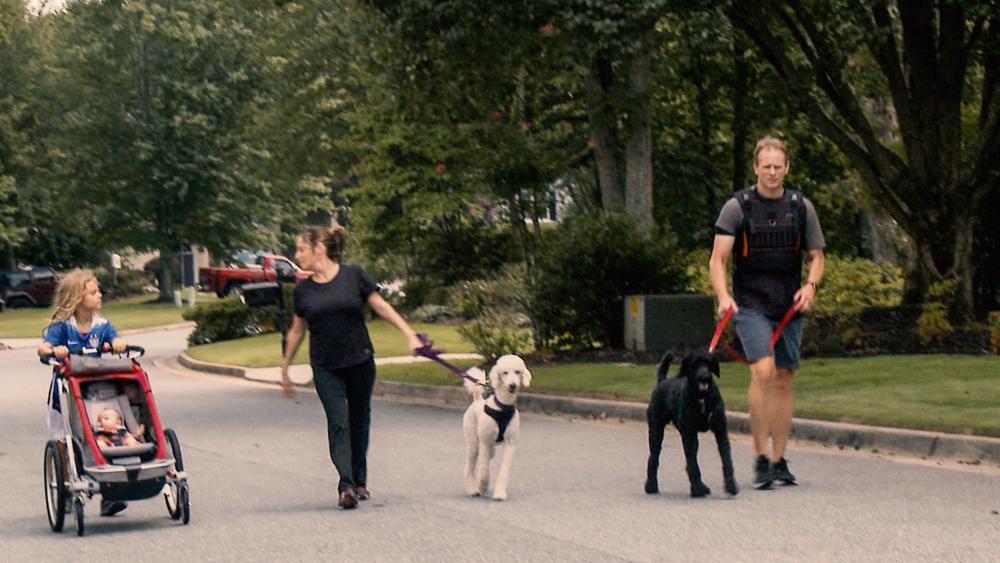 Busy, sleep-deprived, and stressed-out. These are the terms that describe most young parents. That roller-coaster lifestyle rocks your blood sugar and hormones, creating the perfect storm for weight gain.

Even Mark Macdonald, the nutrition expert and bestselling author, gained 35 pounds after becoming a father.

"It's a fact," he said, "So what we know with men right now is the first year of being a new dad you gain 15 pounds. That's what's been shown. And what we're also seeing with parents is that you gain an average of three to five pounds every single year."

Mark and his wife, Abbi, didn't like the direction in which they were going -- so they learned to gain control instead of gaining weight. Mark shares their secrets to success in the book, Why Kids Make You Fat...And How to Get Your Body Back.

"Making your health work as a busy person and a busy parent doesn't mean you have to sacrifice the time you have with your family," Mark said.

He explained that when it comes to managing weight, new parents fall into four traps: lack of sleep, stress, lack of exercise and poor diet.  While all those factors need to be addressed, Mark notes that diet is the most important.

"I believe that 80 to 90 percent of your success is going to be your food," he continued. "Because there's no workout that can outwork a bad diet. Period."

He says the secret to losing weight and keeping it off is what he calls "Eating in Threes," which means eat a protein, a fat and a carbohydrate every three hours.

Abbi said she's noticed in her own life the importance of eating frequent, balanced meals.

"If I spike my blood sugar, I feel awful. I have to lay down. I don't feel good.  People are living that way every day but they don't realize it," she said.

The key to "Eating in Threes" is understanding which foods are proteins, fats and carbohydrates.

Most animal products are proteins.  This includes meats like beef, pork, chicken and turkey, also yogurt (Greek yogurt is higher in protein than regular) and cheese. Seafood also qualifies as protein. There are also plant-based proteins, like tofu, a soy product.

Fats include foods like olive, coconut and soybean oils. These are often the main ingredient in mayonnaise and salad dressing. Butter is also a fat, as are nuts like pecans and walnuts, as well as nut butters, such as almond butter.   Avocados are also considered fats.

Some foods fit into more than one category. For instance, cheese is a protein, but because it contains a lot of fat, can also be considered a fat.

Mark says if you can, eat your protein, fat and carbs in a certain order.

"Protein starts being digested in your stomach, carbs in your mouth. So when you eat your carbs first, it spikes your blood sugar faster. So you should always eat your protein first, then your fat, then your carbs," he explained.

Most Americans eat way too may carbohydrates and too few proteins.

"What I do now, and my son loves it too, is instead of making a turkey sandwich, we make turkey lettuce wraps using Romaine lettuce," Abbi explained.

How to Eat Out

Although packing your food and taking it with you is usually healthier and cheaper, you can still "Eat in Threes" at restaurants, even fast food establishments. A good choice is grilled chicken as the protein, lettuce as the carb and salad dressing as the fat. Another option is an open faced sandwich using grilled chicken as the protein, half a bun as the carb and mayonnaise the fat.

Eating at a Mexican restaurant? Mark says that's not a problem.

"I'll go there; I'll say, 'Where's my protein?' and I get chicken. So I choose one protein," he explained. "And then you have a choice of carbs. You can do a tortilla; you can do rice or beans. Don't do all three. Choose one carbohydrate. I'll add lettuce, and cheese as my fat," he said.

Less sleep, which goes hand-in-hand with parenthood, delivers a one-two hormone punch for weight gain.  This is because not getting enough sleep increases the hunger-stimulating hormone ghrelin and lowers the appetite-suppressing hormone leptin.

Mark advises parents to try to get more sleep.  If that's not possible, he says at least they can learn to get better quality sleep, which pays dividends.  This can be accomplished by avoiding the snooze button.

Replace 30 minutes of useless sleep with quality sleep. For instance, instead of setting your alarm for 6:30 a.m. and hitting the snooze until 7:00,  set your alarm for 7:00 and don't hit the snooze.

"Simple adjustments like that, real strategies, set you up to win," Mark said.

Too many busy parents are dehydrated, which can lead to weight gain.  Believe it or not, our brain sometimes tricks us into thinking we're hungry, when we're actually thirsty.

How many ounces should we drink a day? A good rule of thumb is our body weight divided by two.  For example, a person who weighs 120 pounds should drink 60 ounces of water a day.

Parents know all too well the pre-kid days of spending an hour a day at the gym are long gone.  But with a little creativity, you can work-out while getting more family time.

"It's not me exercising by myself," Mark stressed. "It's me exercising with my family, with my son, with my daughter, Hope, with my wife, Abbi. So you have to start finding what you can do as a family to get active and be able to actually burn fat and feel like you're doing something -- not by yourself, but together."

Family walks, especially for dog owners, can be a daily or even twice-daily routine.  Mark straps on a weighted vest to make his walks a bit more challenging.

Even time in front of the screen doubles as core strength training if you sit on a stability balls instead of a chair.

"That inflatable ball -- you're going to burn three times as many calories per hour than if you were sitting in a chair," Mark said.

"Now when you have too many of those moments, your body can never relax," Mark explained. "You move into something called 'chronic stress.' So cortisol, your stress hormone, stays in your blood, and it's almost impossible to lose weight and burn fat when you're in that moment."

The Macdonalds say following their prescribed guidelines will help shed the pounds and create new, sustainable habits that keep it from coming back.