Nothing Stops a Soldier: Paralyzed Vet Surprises Wife, Dances With Her on Wedding Day 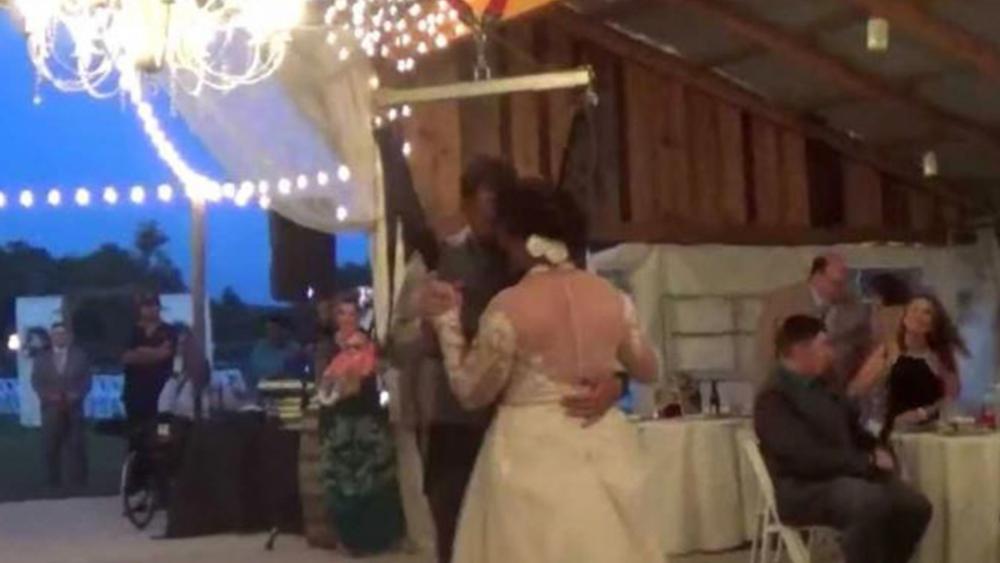 Every bride and groom expects to have some surprises on their wedding day. But 34-year-old Kiersten Downs could not have suspected this one in a million years.

As the woman prepared to enter her wedding reception with her groom, 31-year-old Air Force veteran Thomas Martineau, she realized that she couldn’t find him anywhere. When she decided to ask her wedding planner where he was, Downs was told not to worry because he’s entering their barn reception hall from the opposite side of the building and will meet her on the dance floor, for their first dance.

READ: How Googling ‘White Spot on Face’ Utterly Changed One Man’s Life, and His Relationship With God

As the new bride walks into the room, alone, cool, calm and collected (in her opinion), she immediately looks up to find him. To her surprise and disbelief, her new husband was suspended from the rafters of the reception venue, so he could stand straight up and dance with her.

Her husband is paralyzed and unable to move from the waist down. In 2008 he got in a horrible motorcycle accident causing him to lose his ability to move the lower half of his body, according to Today.com.

During rehearsals and at the wedding he was in his wheelchair and didn’t let on that he had a big surprise planned. After Downs got a hold of herself, she explained she had become slightly worried and even said, “Holy moly, I hope he doesn’t fall!”

But then she saw something that gave her a little more confidence in the situation unfolding in front of her.

“In the corner of my eye I saw our good friend Steve Hill, the lead trainer at Stay In Step Spinal Cord Injury Rehabilitation Center in Tampa, and knew he was the mastermind behind it all.”

Several weeks before the big day, Martineau approached Hill with the plan. And it seems like it went off without a hitch. It also looks like from the video that it was a picture perfect moment for the couple, as they sway to their first song, “Unbreaking Your Heart” by the duo, The War and Treaty, a song the bride fell in love with while at a Veteran community center open mic night.

The bride who’s also a veteran said, “My story resonated with Michael Trotter, lead singer, songwriter, and musician of the group, who also is a three-time Iraq war veteran. That night, Michael and his amazingly talented wife Tanya Trotter dedicated the song” to Downs. And when, “I shared that song with Thomas later that evening, and with tears he said, ‘That’s our wedding song.’”

Now Downs said that the couple has so much to look forward to and she’s super excited to share all of life’s adventures with her new husband.

– Dire Warning: Middle East Christians Will Be Wiped Out ‘Unless the Global Community Gets Involved’

– ‘God Put Us Together for This Reason’: How One Wife’s Gift to Her Husband Literally Saved His Life

About Stephanie Parker:  Stephanie Parker is an award winning international journalist, who is a veteran United Nations press corp member and has traveled the world reporting on stories impacting women, families and girls.