The downpour in Houston has basically ended but authorities there say the human toll from Harvey continues to climb.

Already, at least 20 are dead in the Houston area and more than 17,000 have sought refugee in shelters.

The rain from Harvey dumped 51.88 inches east of Houston in Mont Belvieu, Texas, making it the heaviest tropical downpour in the history of the continental United States. The previous record was 48 inches set in 1978 in Medina, Texas during Tropical Storm Amelia.

The rain is shifting east of Houston now with six to twelve inches expected in southeastern Texas and southwestern Louisiana through Friday. In the Houston area, forecasters expect less than two or three inches.

The main concern for Houston now is rising flood waters, especially after two 70-year-old reservoir dams that protect the downtown area and a suburban levee began overflowing on Tuesday.

Officials in Houston are closely monitoring infrastructure such as bridges, roads and pipelines that are in the path of the floodwaters.

The officially tally of rescues right now is 13,000 but many believe it's much higher. At least 1,000 people are still waiting to be rescued.

At a Tuesday press conference, Houston police chief Art Acevedo told those in need "don't give up on us. Seek higher ground. We will get to you."

The rescue area covers about 10,000 square miles, making it slightly bigger than New Jersey and creating a daunting task for rescue operations.

Houston police officer Sgt. Steve Perez lost his life trying to get to work to help others. Acevedo told reporters that he became trapped in his patrol car in a flooded highway underpass.

Acevedo said Perez left home about 4 a.m. on Sunday for work, even after his wife urged him to stay home.  "I've got work to do," Perez told his wife according to the chief.

He went on to praise Perez, saying, "I've only been here nine months, we've got 6,500 employees and I knew who Steve Perez was, because he was a sweet, gentle public servant."

More than 17,000 people have sought refuge from the storm in public shelters. Houston opened two extra mega-shelters on Tuesday and has asked FEMA for food and cots for an additional 10,000 people. On Tuesday, President Trump visited Corpus Christi near where Harvey made landfall last Friday. He's promising billions of dollars in long-term disaster aid and told a crowd that gathered "it's epic what happened but you know what, it happened in Texas and Texas can handle anything."

The president plans to return to the region on Saturday and meet with victims of the disaster. 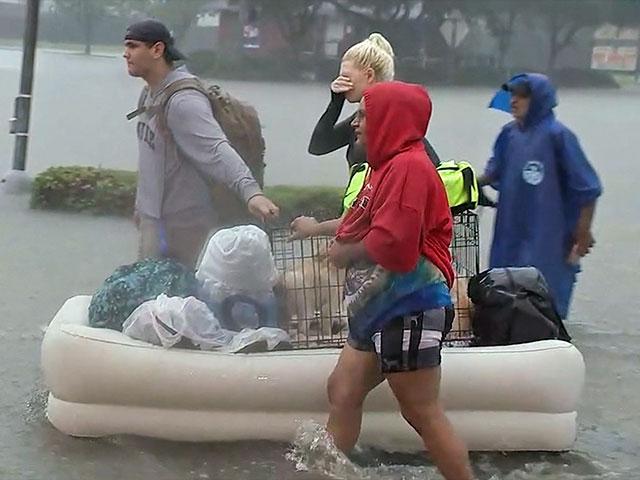 'He Will Provide': Rescuers Obey the Voice of God to Save Devastated Houston Evacuees
CBN News Email Updates