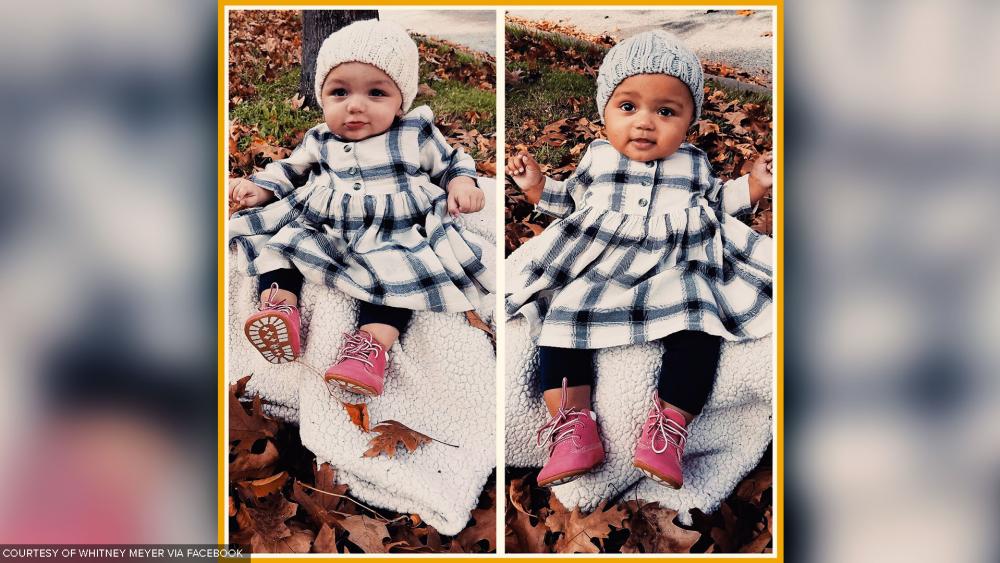 Nine-month-old Kalani Dean and Jarani Dean are cute and cuddly babies, but they're not your ordinary pair of fraternal twins.

The two children born on April 23, 2016, are biracial twins, meaning their parents are two different races.  But in this case, instead of looking like a mix of their parents, one child is dark-skinned and the other light-skinned.

"They are different colors but sisters by blood," their mother, Whitney Meyer, told PEOPLE Magazine. "One is light and one is mixed, but we love them the same."

Meyer is white and the girls' father is black. Kalani has her mother's lighter complexion and blue eyes, while Jarani has brown skin and brown eyes like her father.

The phenomenon is something that Meyer calls a miracle.

"When Kalani came out I thought she (had albinism) because she was all white. I asked my doctors, but they said, 'Nope!' And I kept thinking she would get color but she didn't," Meyer said. "It's unusual."

For a biracial couple expecting twins, there is a 1 in 500 chance of those twins having different skin colors, The BBC reports.

"At first when they were born, I wanted to believe it, but it's so rare I didn't think it'd happen to my twins! But sure enough they're biracial twins," Meyer told KHQA.

"We don't know how often it happens because not all cases come to our attention," Dr. Nancy L. Segal of the Twin Studies Center at California State University told PEOPLE. "I imagine it's going to happen more frequently now that we have more mixed marriages."

Meyer says color is only skin deep and that her children show why racism shouldn't exist.

According to Meyer, her 7-year-old son Talan, who is white and has a different father, does not see color.

"People in this country could learn a lot from my son. He's so innocent. He doesn't understand racial tensions because to him it doesn't matter, as it shouldn't matter to anyone else," she said.

"It's heartwarming, the response I've gotten to my biracial twins," she added. "It restores my faith in humanity at a time when I, when this country, really needs it."