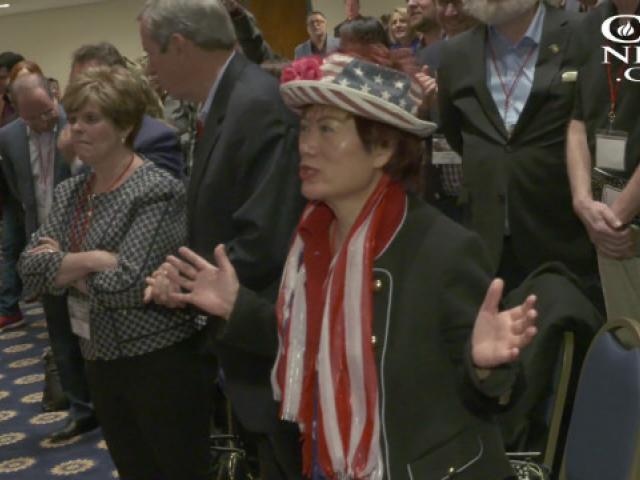 WASHINGTON - POTUS is short for President of the United States, and a new group of prophets, pastors, and other Christians has created what they're calling POTUS Shield- to surround the new president and the government with prayer.

They started in Washington to discern, declare and decree the strategies of God for America. First, they met at the National Press Club and then in discreet small groups outside places like the Supreme Court.

Charisma Senior Editor Jennifer LeClaire prayed with one such group.

"The morning of the election, the Holy Spirit told me 'today – on Election Day – a kingdom will be toppled.'  And we saw that happen. I saw it with my own eyes," she explained.  "When I looked at the map when I woke up the next morning, the map was almost all red.  And I'm thinking, 'This is parabolic of the blood of Jesus.'"

POTUS Shield participants aren't gathering just to gather.  They mean to create a serious prophetic and prayer shield over parts of the government like the White House, Congress and the Supreme Court. They intend to be serious spiritual partners to this secular government.

Mark Gonzales with the Hispanic Action Network believes this could bring about a great awakening and even reformation.

"The future of America is literally in the hands of the church in this hour," he said.  "God has given us an opportunity, a reprieve so to speak, to really engage like we've never engaged and allow us to shift this country through the power of prayer, fasting and seeking God."

"And at the same time, engaging like we've never engaged with our civic responsibilities," Gonzales added.

"The Lord told me He's releasing the angels of transition and they're going to help transition the government into what we've all been praying for," LeClaire told CBN News.  "So our prayers are so important right now.  Right now is not the time to stop praying.   It's time to pull our boots up, roll our sleeves up and work harder than ever before."

"No matter how small you are, you're important," expressed intercessor Denise Emerine.  "And I felt like God was saying, 'I'm going to call my people who are marked by My name to come and repent for the sins of this nation, but more importantly, I'm going to turn that and I'm going to heal your land.'"

"He's going to turn the tables on the economy – we're already seeing strong reports," she said.  He's going to turn the tables with Israel – we're already seeing he's standing staunchly with Israel.  And so many other areas: trade, foreign trade, immigration – there are so many things he has an opportunity to do if the church will stand with him, support him and pray for him."

These Christians say if you feel like you've been on the back-burner, it's time to let God use you again.

"He is there with the brokenhearted, with the humble.  He's there with those who said, 'Look, I messed up, I didn't do, I didn't fulfill, I didn't whatever.'  But this is the time He's needing us," Candace Long of Jasper, Georgia, said. "We've not lost our assignment. The assignment is still there.  He who has called – the calling is without reproach."

One reason LeClaire is trusting Trump is because of the counsel he's getting.

"If you look at his cabinet, if you look at his advisors – SO many Christians," LeClaire said.  "He has surrounded himself with godly counsel, and the Bible says 'blessed are those who do not stand in the counsel of the ungodly.'"

Over and over again, the prophetic voices in POTUS Shield mentioned that God has given the country a time of reprieve, and that Christians in this time must realize how important they are, and that their words and deeds can affect the destiny of a nation.