Tangier Residents Pray for a Miracle to Save their Tiny Island 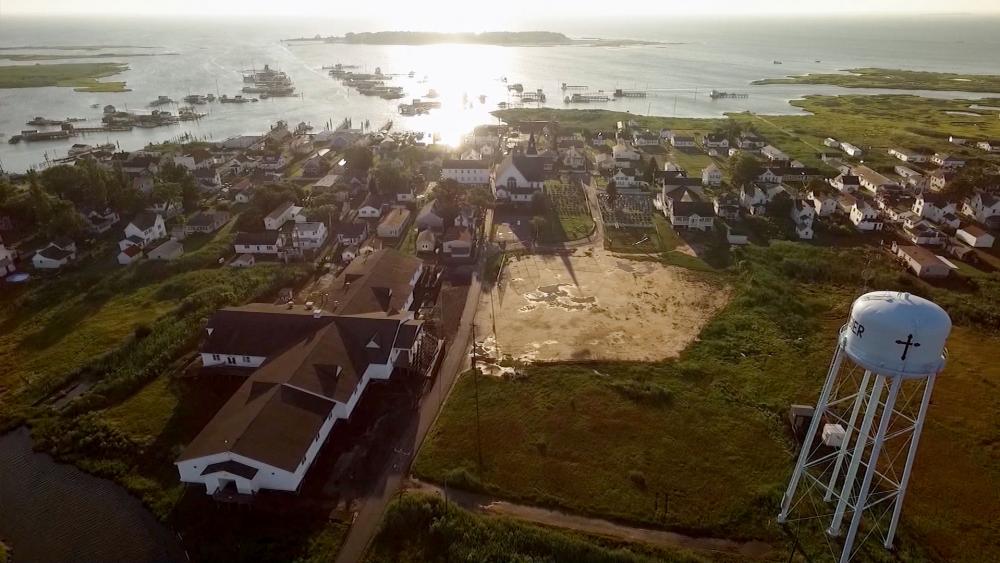 TANGIER ISLAND, Virginia – As a new day dawns over Tangier Island, its beauty and charm are undeniable. The quaint, historic fishing village is home to 450 people and everyone seems to know everyone.

Crab and oyster fishing are king here and tourism also helps to pump up the working-class economy.  The majority of the island attend one of two churches and lean politically to the right.  Eighty-seven percent voted for President Trump and campaign signs still dot the community.

But Tangier Island faces a tough future that is literally playing out day by day.  It includes environmental forces that threaten to wash it away in combination with government agencies unable to act as lawmakers stall on funding.

Marine biologist David Schulte with the Army Corps of Engineers has published the most authoritative study on Tangier to date and says erosion and rising sea waters are taking nine acres a year from the island.  It's lost two-thirds of its land mass since 1850 and at the current rate, stands to become uninhabitable in 20 to 50 years.

"The waters have gotten high enough to the point where the yards are now marsh," said Schulte, "They're getting a lot of flooding in their homes."

What really frustrates Schulte is an area of "the Uppards," which used to be a thriving community but now is merely a strip of sand that's washing away.  A graveyard here has disappeared, save for a gravestone that we spotted on the shoreline.

"I don't like that," said Schulte.  "I'm kind of offended by that.  We as a people can't let that happen to each other."

The Fight to Save Tangier

Mayor James "Ooker" Eskridge is leading the fight to save Tangier.  He's a fixture on the island – a waterman who rises daily at 2:45 in the morning to harvest and sell soft-shell crabs and then advocate for his community in the late afternoon and evening.

Eskridge took us on his fishing boat to see exactly what is happening to the island.

In one area, we navigated a body of water that separates Tangier from "the Uppards."  The water used to be land, said Eskridge.

"You can see this island with the cross – that was all connected," he said, "That was all land across here and you can see how it's just chewing it up and disappearing."

Councilwoman Anna-Pruitt Parks says Tangier's location makes it especially vulnerable.  "We're out here in the middle of the Chesapeake Bay and there's nothing to protect us," she said, "It's not like on the mainland, you're not going to see erosion as much as you see out here.  We see it every day  – we have wind nearly every day so these waves are constantly battering our shoreline."

The $30 Million Plan to Save Tiny Tangier

Schulte has created a $30 million engineering plan that would provide an initial island-saving step.  It would position sea walls around the entire island. He has the support of the islanders who point to the success of Tangier's one small jetty that currently is the only wall that protects the land.

Eskridge says that jetty is proof that Schulte's plan is needed.  "We were losing 25-30 feet of shoreline a year right here," he said, "and they completed that in 1989 and since then we haven't lost one inch of shoreline so  – it works."

Another jetty is set for construction next year but it will only protect the west entrance of the harbor.  Tangier will still need protection for the rest of the island, especially the east side, which faces the brunt of nor' easters and tropical storms.  Also, Schulte says the land on Tangier will need to be built up and the homes raised to protect it long term.  There's no cost estimate on that plan right now.

Pruitt-Parks is pessimistic about Tangier getting the help it needs in time because planning for the harbor jetty started in 1996.  "Stuff just keeps getting delayed and delayed," she said, "it's just a long process."

As Time Runs Out, Islanders Turn to God

With time running out, the island is turning to God like never before.  Pruitt-Parks' grandmother received a prophetic word about Tangier's first jetty and now another island resident, Jared Parks, has shared with the community that he believes God told him that the Chesapeake Bay will not claim Tangier.  "His word to me in fact was that He would cause land to come back and a lot of people look at me and say, 'how is land going to come back?  I mean get real' but I always tell people 'I didn't say it  – God said it,'" he said.

Pastor John Flood leads Swain Memorial United Methodist Church and says he believes God is trying to teach people here to trust in Him.  "It's been a long time on our terms that we haven't seen any action, but in God's terms it's simply a blink of the eye," he said.

Islanders are also encouraged by a new development  – a phone call in June from President Trump to the mayor. It came after a cable news interview in which Eskridge said he loved the President like a family member. Now, the mayor is planning a trip to the White House that Schulte believes could make a huge difference.

"The president doesn't have the power of the purse  – Congress does – but the president can certainly make a strong case for helping Tangier and you know I think if he would personally advocate for something I would think that Congress would take it up and put it in the budget," said Schulte.

Either way, said Schulte, taxpayers are on the hook.  If the islanders need to evacuate he estimates it could cost $100 million or more to relocate them and shut down infrastructure in the town.

For now, Tangier is waiting, praying  – and believing.

Parks said he believes the island has hope. "I still have people that will call me and say 'I was thinking about when you spoke in church that time and I still believe what you said that the Lord's going to do something for the island,'" he explained. "You know sometimes God uses the waiting to teach us."

Click here to find out more about what Tangier Island residents are doing to save their island: Tangier's GoFundMe page