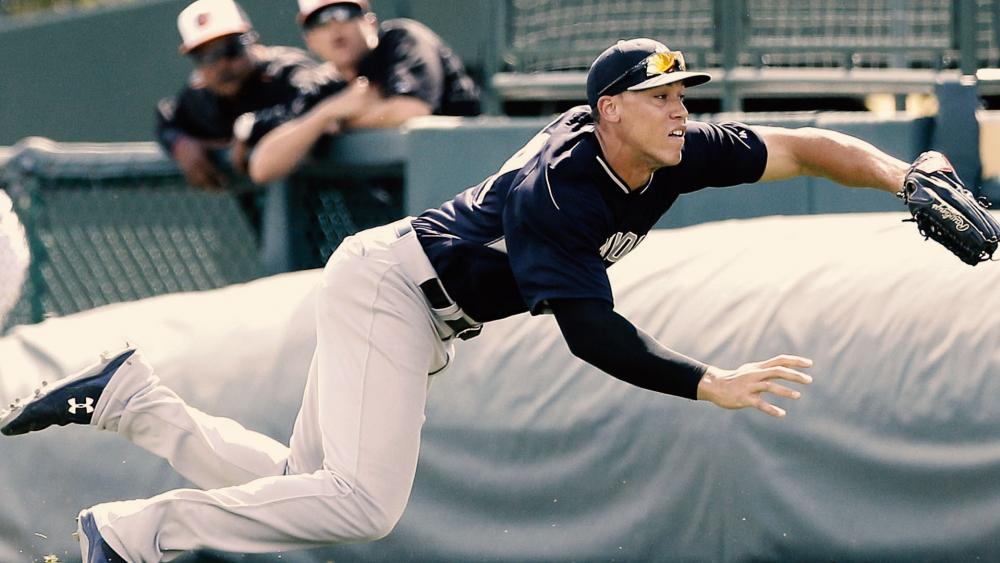 Flashback to March: It was Spring Training, and the New York Yankees had a decision to make. Should a young right fielder who hit .179 in 27 games over the previous season make the team, or be sent down to the minors for a little more seasoning?

After weeks of careful deliberation, the Yankees decided to grant the prospect a roster spot.

Looks like they made the right decision, just like two school teachers from California did a little more than 25 years ago.

In April of 1992, Patty and Wayne Judge of Linden, California adopted a one-day-old baby and raised him as their own.

"Some kids grow in their mom's stomach; I grew in my mom's heart,'' Judge later added. "She's always showed me love and compassion ever since I was a little baby. I've never needed to think differently or wonder about anything.''

For their part, the elder Judges have largely shied away from the spotlight, preferring to let the focus stay on their son, Aaron. Of course, in his own way he has shined it back on them, as the parents who raised not just a star athlete, but a model citizen as well.

At Linden High School, Judge was part of the student government, a member of the school's anti-drinking and driving program, and carried a 3.5 GPA.

Fast-forward to today, and Aaron Judge is the biggest star in the game – both literally (his 6'7", 282 lbs physique seems more suited for a football field than a baseball diamond), and figuratively (he led the American League in the All-Star fan vote, getting the nod on more than four million ballots).

That vote is certainly well-deserved. At the halfway point for the season, Judge leads the majors in home runs (30), runs (75), on-base percentage (.449) and slugging (.697). He is second in the league in runs batted in (66), and third in batting average (.329).  All told, he could win both the AL's Rookie of the Year Award and the Most Valuable Player Award this season – a feat that's only been accomplished two other times in baseball history.

And yet, everything he has accomplished on the field so far pales in comparison to what happened last night.

The place: Marlins Park in Miami. The scene: The Home Run Derby. The participants: Eight of baseball's premiere sluggers. The goal: Whack a bunch of dingers.

Heading into the event, the favorite could have been Giancarlo Stanton – the man who signed the richest contract in sports history. The man who broke the Derby record for most home runs just a year prior. The man who'd be playing in front of his hometown crowd in Miami.

Stanton didn't even make it out of the first round.  That's fine. It wasn't his night.

Now, thanks to the nerd revolution across baseball, fans watching the event knew a few key details: Judge owned the longest home run of the year (a mammoth 495-foot blast that cleared the bleachers in Yankees Stadium), including many of the hardest hit balls of the year (his top shot had an exit velocity of 121.1 miles per hour – a first-inning scorcher that went for, you guessed it, a home run).  So fans expected the young phenom to put on a show.

His work was cut out for him after Round One, as Miami's other slugger, Justin Bour, blasted 22 homers of his own. That's an impressive figure – the fourth-highest single-round total in baseball history, as a matter of fact. Unfortunately for him, the "fourth-highest" round became the fifth-highest moments after Judge stepped to the plate and slapped 23.

Round two was more of the same. Los Angeles's own prized rookie, Cody Bellinger, sent 12 over the wall before running out of steam. Judge, on the other hand, was just warming up. He hit 13, including a bomb measured at 513 feet.

The final match-up was rather anti-climactic. Minnesota's Miguel Sano struggled to hit 10 home runs. Judge effortlessly hit 11 before calling it a night.

And while this Baby Bronx Bomber may be the new "face of baseball," it doesn't seem to be affecting him any. In addition to his prowess on the field, he's drawn rave reviews for his character outside it. Words such as "humble" and "unselfish" are routinely used in profiles.

His manager, Joe Girardi, even compared him to Yankees living legend Derek Jeter: "He has a smile all the time. He loves to play the game. You always think he is going to do the right thing on the field and off the field."

"Words can't describe how proud of him we are," Aaron's father Wayne has said. "If it happens to end tomorrow, he's the type of kid who will say, 'It was meant to be' and move on.''

As for where Aaron Judge gets his humility, the answer may be found on his Twitter page. On the "About Me" section, "baseball" is listed fourth, behind "Christian," "faith," and "family."

He ends with a quote: "If what you did yesterday still seems big today, then you haven't done anything today!"

And the promise of what Judge will do today, and tomorrow, has baseball fans salivating.

All Rise for the Judge, indeed.