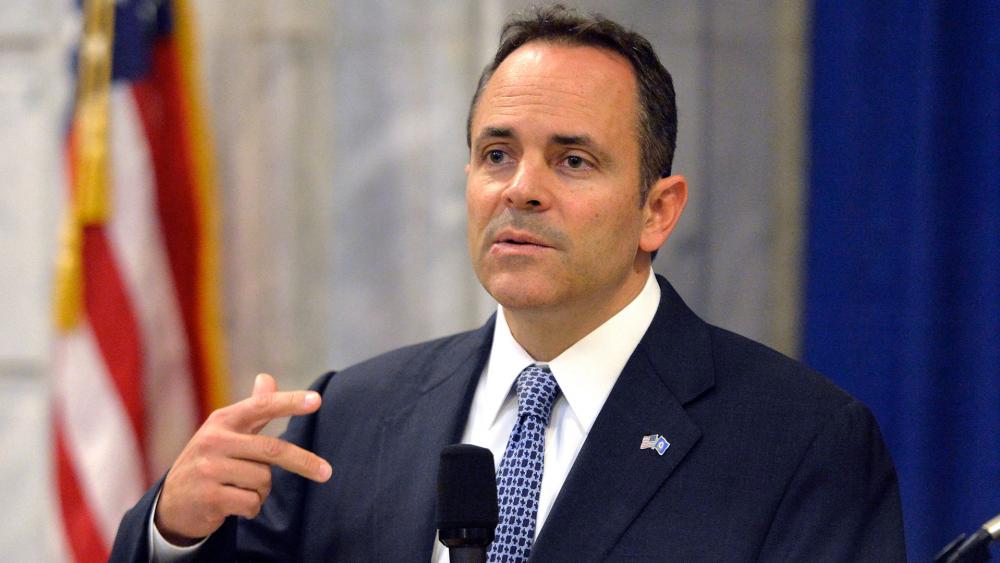 Kentucky Governor Matt Bevin has unveiled a plan to turn around the recent uptick of violence in Louisville. He wants to use prayer to combat crime, but he is coming under fire for proposing the plan.

Bevin is asking faith volunteers to adopt different blocks in the areas and pray. The goal is to have three to ten volunteers commit a full year to praying and walking their block two to three times a week.

"You know, you walk to a corner, pray for the people, talk to people along the way," Bevin said during a community meeting, according to the Louisville Courier-Journal. "No songs, no singing, no bullhorn, no T-shirts, no chanting. Be pleasant, talk to the people, that's it."

In recent weeks, the city has seen several homicides, including the death of a 7-year-old boy named Dequante Hobbs who was killed by a stray bullet last week.

"Prayer is powerful, and a people united in prayer will make a difference in their communities," Bevin wrote on Twitter.

Although Bevin's strategy was received favorably among some community leaders, others feel more needs to be done.

"I believe in prayer. I'm a pastor. I pray every day, I pray all the time," Rev. Joe Phelps of the Highland Baptist Church told WHAS-TV

"That's not the answer here," he added. "For him to reduce the problems of violence to getting people to go pray for a block is an embarrassment to Christianity. I feel embarrassed for the Christian faith if the governor of Kentucky is saying these things as a solution to violence in our community."

Mayor Greg Fischer said there are many solutions. He's encouraging the community to get more involved with the Office of Safe & Healthy Neighborhoods and other community programs, Louisville Courier-Journal reported.

"This is not going to be solved overnight, so if anybody wants to help, we welcome you," Fischer said.

Some faith leaders have rallied behind Rev. Clay Calloway, who delivered a speech shortly after Bevin.

He suggested there are more practical approaches to helping Louisville.

"If you are serious about fixing violence in west Louisville, then you must have the courage to address its root causes of injustice and racism," the Rev. Calloway said.

Calloway and The West Louisville Ministers Coalition suggested 10 ways for the city to help end violence:

1. A more equitable distribution of state government contracts to African-American businesses
2. Advancing an educational curriculum in Kentucky that positively reflects the contributions of black people and black culture
3. Reforming gun regulation and legislation that has made it easier to buy a gun in West Louisville than a piece of fresh fruit
4. Judicial diversion programs (i.e. educational opportunities at an HBCU)
5. Restoring full citizen rights to ex-offenders
6. Ending the privatization of prisons and prison gerrymandering
7. Protecting citizens who cooperate with police and other authorities during investigations
8. Educating Kentuckians on the consequences of past and present racism and injustice to both black and white citizens
9. A public apology to black people from the Commonwealth of Kentucky for past and present injustices inflicted against the black community.
10. Providing tangible opportunities for preferential treatment to blacks as a corrective to centuries of special mistreatment and providing African Americans with an opportunity for equity in critical areas such as employment and housing

Others faith leaders are eager to implement Bevin's plan.

"As a matter of fact, I will share this with my congregation when we meet on Sunday," Oliver Evans of Spradling Memorial A.M.E. Zion Church told NBC News.