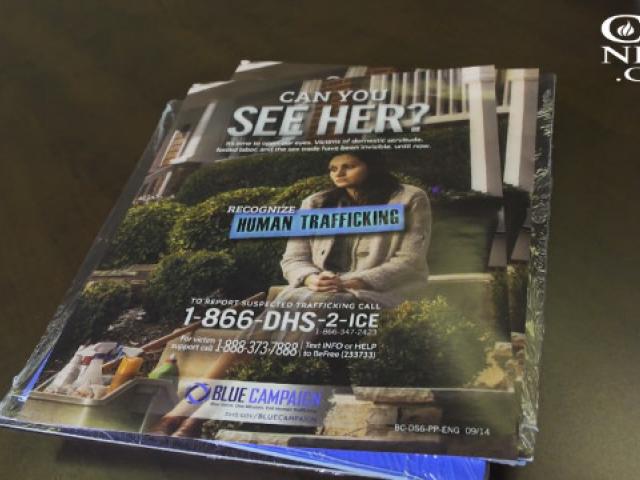 ARLINGTON, Va. – One group fighting sex trafficking calls itself S.O.A.P. - Save Our Adolescents from Prostitution.  And they’ve actually found a way to use soap to battle this second leading crime in America.

This weekend, they gathered a couple of dozen volunteers in Arlington, Virginia across the Potomac from Washington D.C. to pack bags with bars of soap that have the number of the National Human Trafficking Hotline on the wrapper.   Then they delivered these bags to hotels and motels around the D.C. Metro area.

The wrapper says “Are you being forced to do anything you do not want to do?   Have you been threatened if you try to leave?  Have you witnessed young girls being prostituted?  If so, please call: 1-888-3737-888 – National Human Trafficking Hotline.”

S.O.A.P. Founder Theresa Flores recently received a text message from someone about one of these wrappers.

Flores recalled, “It said ‘you are the reason I’m free.  I found a bar of soap in Chicago and it gave me a reason to get out.’"

The volunteers working with S.O.A.P. also gave local hotels and motels folders containing a list of warning signs for desk clerks to watch out for, and also photos of missing girls who might be among the potentially thousands of sex trafficking underage victims in the U.S. right now.

Photo in the Right Hands Led to Rescue

Flores was around when a photo of a missing girl put in the hands of a desk clerk worked recently.

“And the clerk said ‘she just checked in 20 minutes ago with an older man.'  And she’s 15, right?   So we were able to call the authorities and go get her immediately, “ Flores told CBN News.

The card for desk clerks is labelled “Warning Signs of Trafficking or Sexual Exploitation of Minors.” Some of these signs it listed:

Barbara Amaya was there in Arlington to help train the volunteers.  She writes in her book “Nobody’s Girl” about being sex-trafficked from the age of 12 to 22.     Amaya told CBN News children are a favorite among those who pay for sex.

For those fooled by movies like “Pretty Woman” into thinking prostitution is a glamorous, fairy tale lifestyle, they need to know what someone like Amaya lived through.

She stated on the Richmond Justice Initiative website, “During my time on the streets of New York, I was abused, shot, stabbed, raped, kidnapped, trafficked, beaten, addicted to drugs, jailed, and more all before I was 18 years old.”

Flores was sex-trafficked, too, as a young teen and says the damage never really goes away.

“It’s lifelong,” Flores explained.  "When you’re trafficked, if it’s for a weekend, if it’s for two years or five years, it doesn’t matter, you’re really broken forever.   And it takes a lot to heal.”

People who don’t think they have any tools to fight sex trafficking need to realize something as simple as a bar of soap and a couple of pieces of paper can lead to rescued lives.    They can contact S.O.A.P. or other groups battling illegal trafficking, like Seraphim Global, National Center on Sexual Exploitation or the National Center for Missing & Exploited Children to learn ways to help make those rescues happen.