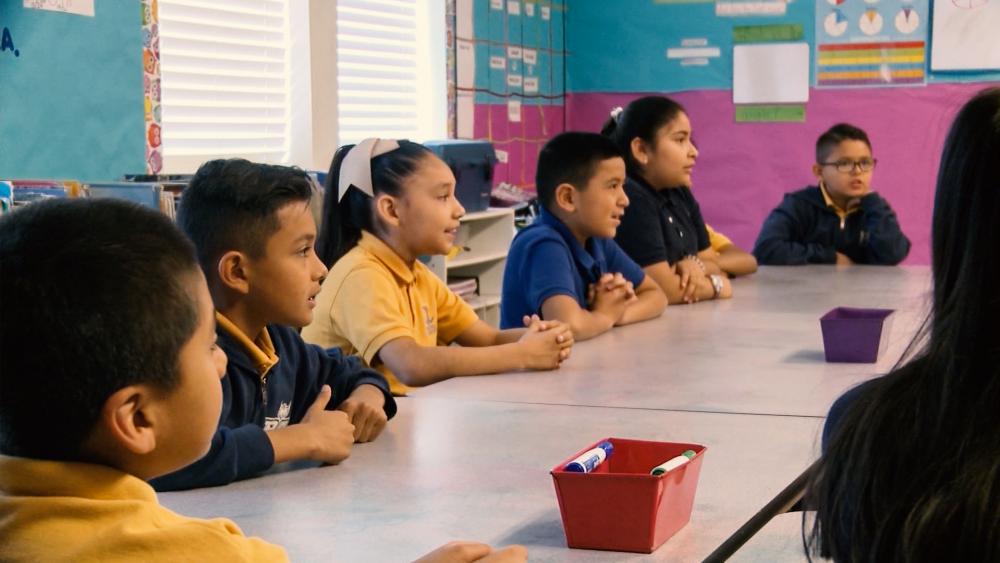 PHOENIX, Arizona – President Donald Trump wants to budget an extra $20 million for school choice but the big question is—does it work? CBN News decided to visit a state where, after years of trial and error, school choice has begun to make a real difference in the lives of students and their families.

At 8 o'clock every morning, the K-8 students at Paideia Academies, a public charter school in south Phoenix, recite their mission statement and sing about their education "I'm going to use my synergy. I'm going to be in charge of me. You're going to love me when I lead!"

Teaching Students to Give Back

A few miles away, students at the Arizona School for the Arts, another public charter school, work intently on their ballet technique in preparation for an upcoming school recital.

And, at the Espiritu Schools, students are tackling math and getting ready for their next community service project. Service is a major value for the school. Executive Director Adrian Ruiz says Espiritu is very intentional about encouraging and teaching students to give back. "We try to teach kids that it's not just all about me, me, me but it's about how do we serve the community?" said Ruiz. "How do we get them to take the skills and knowledge that they've learned and to help them better the lives of others?"

Charter schools are a big part of the choice landscape in Arizona. More than 500 serve students across the state.

In the 1990's, Arizona lawmaker Lisa Graham Keegan sponsored the original charter school bill and went on to become the state superintendent of public instruction from 1995 to 2001. Arizona, she says, has always been open to new ideas. "The culture of Arizona is to innovate, create something new," she says.

The state started with open enrollment which allows students to choose their public school regardless of their address. Next came tuition-free charter schools and a other strategic educational choice tools.

A state voucher-type program, known as Empowerment Scholarship Accounts, provides money for educational accounts for parents ranging from $4,000 - $30,000 a year. Its goal is to help students with disabilities and those in low-performing public or charter schools to pay for an alternative private education.

Tax credits are also available for those who contribute to private school scholarships.

It's all part of a mix, according to Keegan, that not only helps children and their families but teachers as well.

"You have to let educators come into this market and provide what they know how to provide—whether that be in private schools, public schools or home schooling," she says. "There is so much more talent out there that we don't allow into the marketplace because of our regulatory view about who gets to provide."

Dr. Brian Winsor, the principal at Paideia, greets his students every morning by name and with a handshake as they run onto the playground. After previously working in the state's public schools, he loves the freedom of running a charter. While the State Board for Charter Schools grades its schools and can ultimately shut them down if they fail to meet academic standards, Winsor says he has a great deal of flexibility. He recently switched the school's math curriculum within a matter of months when data showed it wasn't working well. He can also hire and fire as needed.

"I'm able to carefully coach a teacher or any employee here and when I feel like they've been coached up and they're ok we move on," he said. "But if I feel like they're not following my counsel or treating our children well or our other people I can let me them go, rather quickly."

Joanna de'Shay chose Paideia for its philosophy of using moral principles to educate the whole child. It especially helps in a low-income area like south Phoenix she says. "A lot of these students have hurdles," she told CBN News, "hurdles at home, hurdles that are above and beyond the curriculum that affect how well they do at school and Paideia said 'let's look at all of it. Let's look at the family structure. Let's look at grandparents raising grandkids.'"

As a bonus, an on-site family resource center at the school links families in need with social services and counseling.

De'Shay, a school board member, says parents who come and tour the school often cannot believe that it's tuition-free. "When people walk through our doors they see the big pillars," she said, "I've had more parents say 'oh I can't afford that.' When I tell them it's tuition-free they say 'no, really, what's the catch?'"

Cynthia Moraga is an Espiritu parent who discovered the school after an intensive search to help her daughter who was struggling at her public school after suffering from a concussion. School choice made all the difference she says. "I was able to come and search and I did," she said. "I searched hard. I looked at six different schools in the area and asked questions." Ultimately she chose Espiritu for its charter board "A" rating, attentiveness to her daughter and community service focus.

"These aren't the most wealthy schools," she explained, talking about what's available in south Phoenix. "They don't have a lot of money coming in, but what school out there do you see making packets for the homeless? Which ones are out there cleaning up the community?"

Phoenix-based educational entrepreneur Jaime Martinez founded Schola Solutions to help parents like Moraga who are searching for the best school for their child.

The Down Side of School Choice: Accessibility

Accessibility is a downside of school choice that even Education Secretary Betsy DeVos, an ardent advocate for school choice, has noted. "We need to find ways of better connecting citizens to the information they need," she said during a speech at the Brookings Institution, explaining that parents often don't understand the many educational options they have for their children.

Martinez has developed a search engine to help parents explore and navigate their options. He believes that despite the current political climate, the timing is right for education reform. "School choice is growing and it's coming and it's here for a lot of states," he said, "and the states it's not currently available in—it will be soon."

Martinez says that millennial parents are realizing that traditional educational models don't always work for their kids and are looking for and demanding options. "Our generation is used to having choice in everything," said Martinez, "from the places that we eat to the news that we read to our social media sites."

In Arizona, after decades of work, school choice is on the rise. Keegan notes that in the last five years, 100,000 families have moved their children from low to high-performing schools. She credits a mix of educational options and the state's strategy of closing charter schools that don't perform and encouraging the ones that do to replicate themselves.

In South Phoenix, the strategy has paid off. Keegan calls it a "golden corridor" -- which in Arizona education circles means an area that was previously known for its under performing schools -- transformed into an area known for its high educational offerings.

"You get to a point," she said, "where you have so many high quality schools emerging that now there's a buzz and now families are talking in their churches and in their community centers 'oh we've got some really great school options and it has transformed our family.'"

That kind of scenario, she says, is the goal and the hope, of school choice.