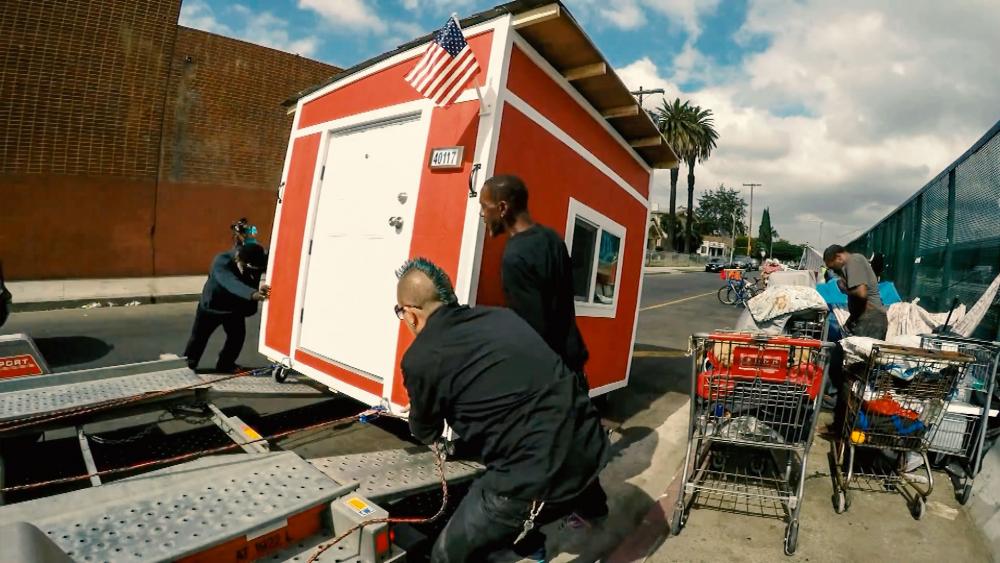 Tiny Homes for the Homeless
5468121557001
Tiny Homes: Solution to Homelessness or Urban Nuisance?

According to the LA Times, the startling jump has touched every significant group, including youth, families, veterans and the chronically homeless.

In 2015, Elvis Summers, who was once homeless himself, started tackling the problem, one tiny house at a time.

It all started after he became friends with a woman named Irene McGhee, better known as Smokey.

Irene had been homeless for 10 years, following the loss of her husband.

In an interview with CBN News he explained, "One day I was like, 'Smokey, I know you said you lived down the street but where exactly?'"

"…I made her walk me down there and show me and it was one of the houses down the street like a strip, a dirt next to the house and a broken chair. And she was, like, 'I sleep over there.... right by that chair,'' he said.

Providing a Place to Call 'Home'

That revelation moved Summers to build Smokey a place she could call home: a tiny home.

"I just asked her, 'you know, how would you feel if I built you a little mini house?' And I love her response, she said 'when's it gonna be ready?'" said Summers.

"…I went to Home Depot and bought 500 bucks' worth of wood, threw it on the ground and went, ok, let's build a tiny little house."

It took five days to build the three-and-a-half by eight-foot house. Video of the construction went viral.

Since then, Summers has raised more than $100,000 to build more of these houses for people in his community.

Although not officially recognized by the government, each of the tiny homes comes with its own personal address.

Summers said, "That's what people want, just a place to rest their head. So I put an address on there to mentally help that lift."

Some local governments around the country are also using tiny homes to help their homeless populations.

Tiny homes for the homeless are popping up from Chicago to Portland, Oregon, where the idea has grown to tiny house villages.

But in Los Angeles, some officials see the small houses as nuisances with some saying they pose health and safety risks.

"These wooden shacks are not the real estate I'm looking for in my district," said Councilman Joe Buscaino.

Councilman Curren Price agrees, saying, "I'm getting complaints from constituents who have to walk in the streets to avoid them."

Earlier this year the LA City Council moved to seize the homes without prior notice.

Government Seizure Leaves Homeless Back on the Streets

Summers managed to move eight of them to Faith Community Church, but the people who lived in them were once again on the street.

He explained, "It was like watching Linus and the Peanuts drag the blanket away."

"It was heartbreaking. It was one of the worst days."

"It hurts my heart how the city has been taking the homes from the homeless and wanting to destroy them if they didn't have somewhere else to put them," said Chambers.

"Elvis is, and I am too, trying to see if we can get some property somewhere to be able to set these homes up and set up a homeless encampment to be able to allow them to have a place."

After months of backlash and media attention, the city said it is developing a process to work with non-profit groups, including Summers, to help those living on the streets.

"She was a wonderful human being," Summers said.

"She was my friend."

He said her that her memory motivates him to help others.

"I can't go and change the whole world but I can do the best to change the world around me and that's what I'm trying to do."

"And I hope that in the process it inspires other people to just take a second and be better."