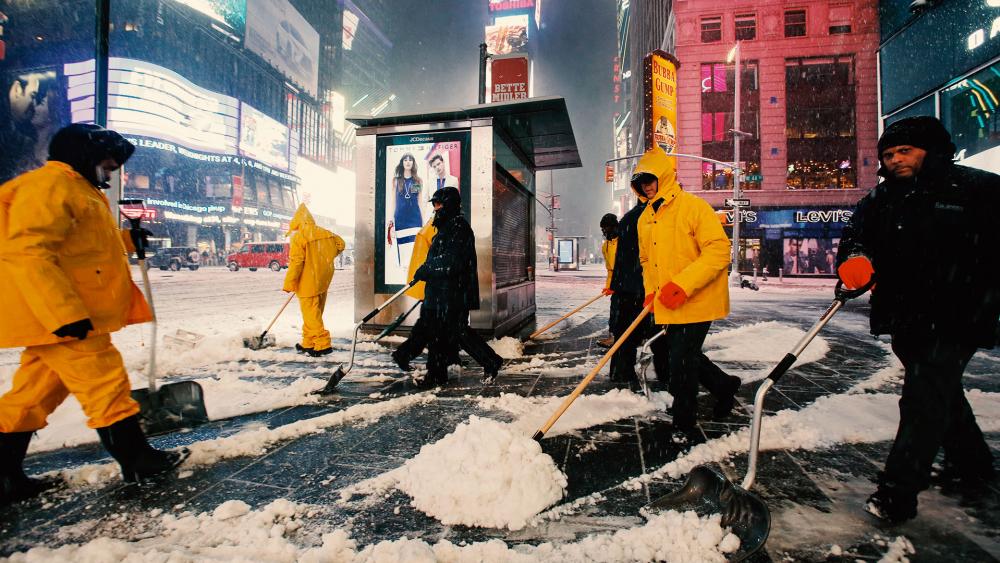 A blizzard is blasting the mid-Atlantic and Northeast hard and fast Tuesday after already dumping a hefty amount of snow on the Midwest.

Government officials in places like Massachusetts, Pennsylvania, Maryland and New York are telling residents to stay off the roads.

"We expect this storm to be in the range of 16-20 inches of snow," New York City Mayor Bill DeBlasio said.

New York also expects crazy winds, with gusts up to 55 miles an hour.

In Philadelphia, the National Weather Service says the storm is life-threatening and is urging people to shelter in place. The governor has called on 700 National Guard members and is deploying 2,000 snow plows.

In Massachusetts and Maryland, forecasters expect 12 to 18 inches, with the latter declaring a state of emergency.

"Our state is taking every precaution and coordinating all available resources to respond to this winter storm," Maryland Gov. Larry Hogan said. "We urge all Marylanders to use common sense and to stay indoors and off the roads. Now is the time to remain alert and regularly check for updated weather forecasts as conditions change."

Meanwhile, air travelers are also feeling the effects of the storm. So far, airlines have canceled more than 5,000 flights.

"We were unable to do anything by way of rebooking our tickets online," said air traveler Chris Brislawn. "The website simply would not respond to any clicks."

Schools across the Northeast are also shutting down in response to the forecast. And in Washington, D.C., which is getting a mix of snow, sleet and freezing rain, federal workers have been granted a three-hour delay.

"They're throwing everything they got at this," The Washington Post quoted Taran Hutchinson, a spokesman for the Metropolitan Area Transportation Operations Coordination.

"I saw the smash," recalled Michael Ghorfrani, was who involved in the multi-car pile-up. "I stopped. I stopped the car and I saw from in back they were coming, all the cars... and bam, bam, bam!"

It was just one week ago that temperatures climbed up into the 60s in many parts of the Northeast. And with spring officially beginning next week, there's hope that this storm will be the last.