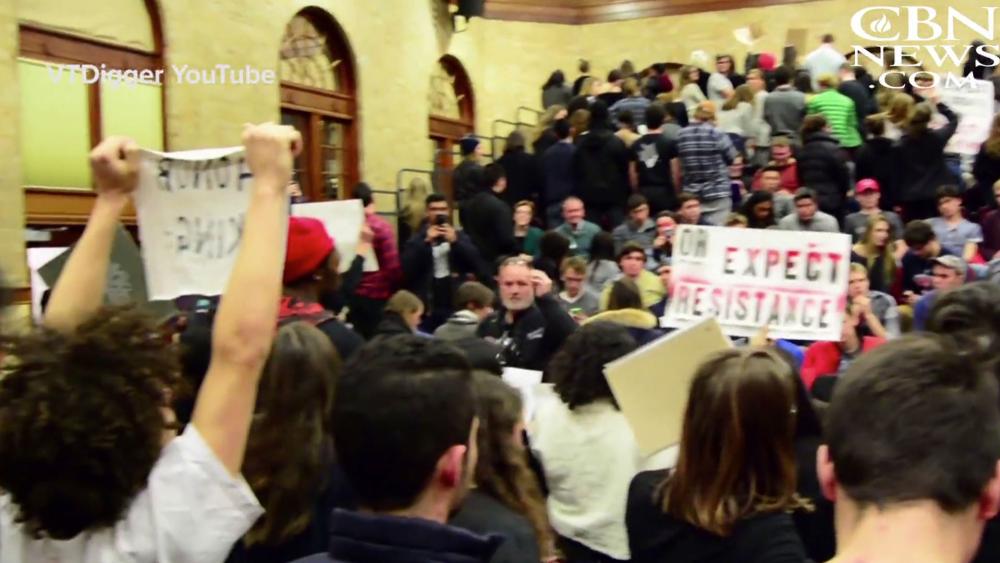 Students at a Vermont college hurled insults, harassed and even assaulted a professor in an effort to stop a conservative scholar from speaking at their school, according to The Addison Independent.

He was invited by the school's AEI chapter to discuss his book Coming Apart. However, a number of students protested Murray's appearance claiming he co-authored a "white supremacist" book, according to The Daily Wire.

The Bell Curve, published in 1994, discusses the intelligence levels in people based on race.

Students piled into the lecture hall, turned their backs to Murray and chanted: "Racist, sexist, anti-gay, Charles Murray, go away!" and "Your message is hatred. We cannot tolerate it."

Murray later recounted the incident in an essay posted on AEI's website.

"The lecture hall was at capacity, somewhere around 400," Murray noted. "There were lots of signs with lots of slogans, liberally sprinkled with the f-word."

"Some were just having a snarky good time as college undergrads have been known to do, dancing in the aisle to the rhythm of the chants," he added. "But many looked like they had come straight out of casting for a film of brownshirt rallies. In some cases, I can only describe their eyes as crazed and their expressions as snarls."

After twenty minutes of protesting, Middlebury professor Allison Stranger moved the speech to another venue. According to reports, she wanted to give Murray the opportunity to give an abbreviated speech to students who wanted to listen, but the harassment continued.

Students banged on the walls and even pulled the fire alarm.

Accompanied by security guards, Murray, Stranger, another college administrator and some students made their way outside but were stopped by 20 protestors, some who were wearing face masks.

They began to push and shove the group and one grabbed Stranger's hair and began twisting her neck.

College Spokesman Bill Burger told the Addison Independent that the group was able to break free and run to the car.

"The protesters then violently set upon the car, rocking it, pounding on it, jumping on and trying to prevent it from leaving campus," he said. "At one point a large traffic sign was thrown in front of the car. Public Safety officers were able, finally, to clear the way to allow the vehicle to leave campus."

Stranger was later treated at a local hospital for a neck injury.

Middlebury College President Laurie L. Patton delivered a message the day after the attack saying that the campus community failed to live up to their core values.

"I extend my sincerest apologies to everyone who came in good faith to participate in a serious discussion, and particularly to Mr. Murray and Prof. Stanger for the way they were treated during the event and, especially, afterward," she said.