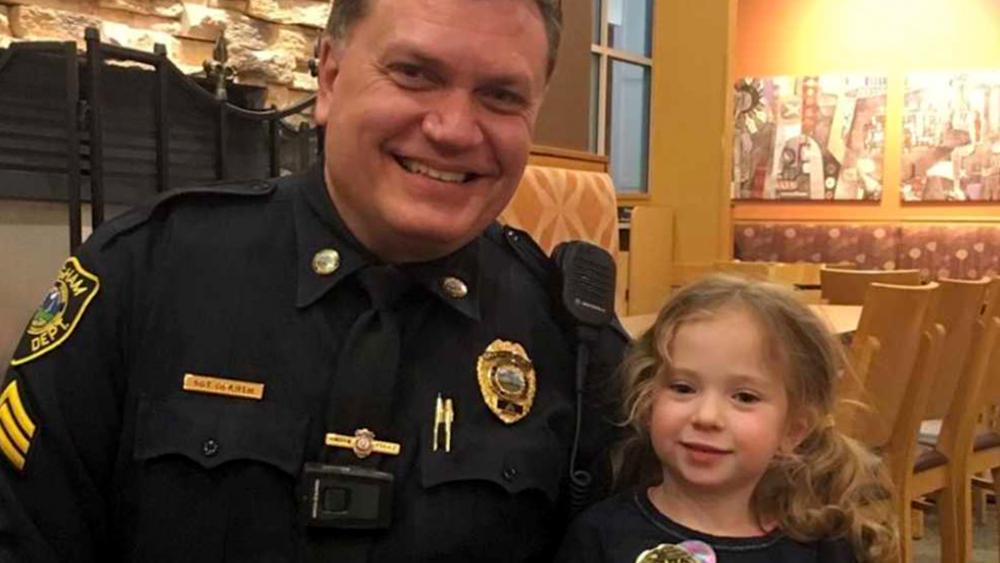 A 4-year-old little girl is at the center of a heartwarming story after she reportedly approached a police officer who was eating alone at a Massachusetts Panera Bread and decided to sit down with him.

Little Lillian approached Hingham Police Sgt. Steven Dearth earlier this month and said hello before sitting down for a chat, according to a post published on the Hingham Police Facebook page.

“It means a lot to police officers when people say hi, especially when children approach us,” the post read. “Lillian came up to Sgt. Steven Dearth … to say hi and wanted to sit with him for dinner break. Of course, we gave her a junior police officer sticker and had the best dinner date.”

Lillian was at Panera Bread with her parents and her younger brother on March 4 when she noticed Dearth sitting alone and approached the officer, according to ABC News.

“I was working an evening shift and I stopped to have dinner at Panera bread. I was waiting for my food to get ready and I saw this little girl and she looked at me and smiled and I smiled,” Dearth told Inside Edition. “Her dad carried her over and then I gave her a high five and a ‘Jr. Police Officer’ sticker.”

The police department also posted some adorable security footage from Panera Bread showing Lillian — who was characterized in a video description as “very adorable and very outgoing” — sitting and talking with Dearth.

“She asked if I had a police car and toward the end of the dinner she said, ‘We should have a playdate in a few days.'” Dearth recalled. “The whole time she never turned around to look at her parents. It was amazing to see a child that was that comfortable around a uniform police officer.”

The little girl’s mom later said that the child couldn’t stop talking about the encounter. After dinner, Lillian and her dad also had the opportunity to check out Dearth’s police car, the Kansas City Star reported.

Lillian and her mom plan to head down to the police station for a tour sometime this week as well.

– Ex-Convicts Were Consumed by ‘Drugs, Guns and Gangs’ but Their Redemption Story Proves People Can Change

– ‘Fight for Me’: American Pastor Reportedly Detained in Turkey on Bogus Terror Charges Pleads With Trump