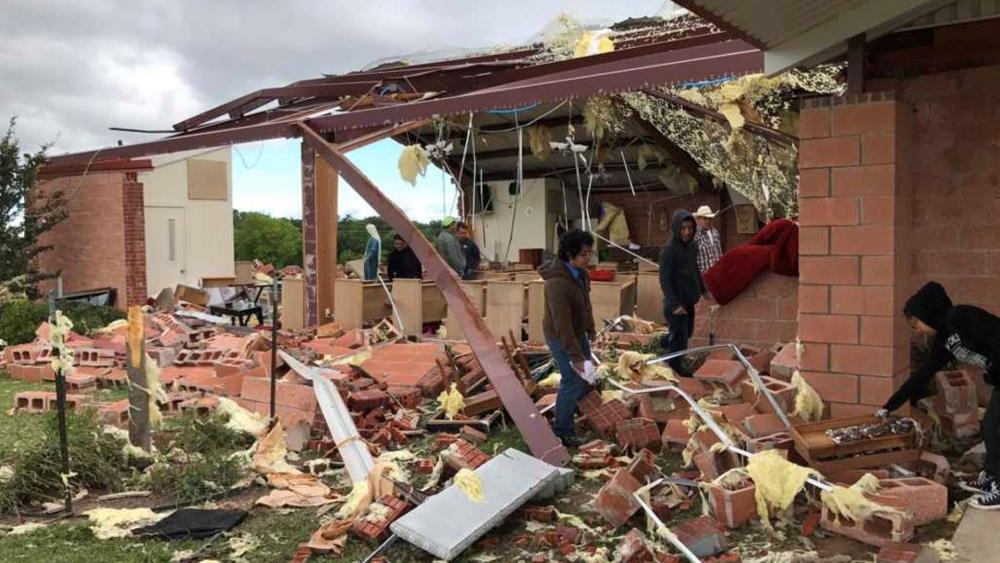 A deadly series of tornadoes swept through Texas, Arkansas and Missouri over the weekend, killing more than a dozen people and leaving destruction in their paths, and the impact at one church near Dallas, Texas, is creating quite a bit of buzz.

St. John the Evangelist Catholic Church was among the buildings that were dramatically impacted when a tornado ripped through the town of Emory on Saturday.

READ: ‘This Is a Miracle’: The Odds Were Stacked Against Hospital’s Smallest-Ever Preemie — but Faith Reigned

But while the roof and walls of the church building were torn off and “both ends of the building were blown out,” as Peyton Low, the Diocese of Tyler’s director of public affairs told media, not one of the 45 people inside were injured.

There reportedly wasn’t even a scratch on any of the adults or children huddled inside.

It’s an event parishioners are calling a flat-out miracle, according to the Daily Mail.

Upon news that the tornado was coming, the group left the parish area and congregated in a hallway, ducking down in an effort to keep themselves safe. Just 30 seconds later, CNN reported that chaos ensued, as the group could see through a window that the tornado was ripping apart parts of the very building they were in.

“We could see the beams bending and the aluminum roof being ripped away,” youth minister Monica Hughes told CNN, noting that she and her husband held the doors closed as the storm hit. “Everybody dropped to the floor and protected one another.”

She continued, “As soon as the worst was over, we began to sing to keep the kids calm.”

Hughes said that the group — which remained in place for two hours after the storm to ensure their safety — also relied on prayer throughout the ordeal.

Now, in the aftermath, those inside are immensely grateful for their survival.

“People are using the term ‘miraculous’ (to describe what unfolded),” Low said.

Saint John the Evangelist Church has shared photos and videos of the devastated church building on Facebook over the past 48 hours, thanking God for protecting those inside.

READ: Bill Nye vs. Bill Nye: Did the ‘Science Guy’ Once Preach That Human Life Begins at Conception?

“Saint John the Evangelist Church in Emory, Texas, was totally destroyed by a tornado last night,” one post read. “About 45 people were just 10-feet away in a hallway sheltering when the tornado hit. By the grace of God and the protection of Our Lady, no one was injured.”

– Children as Young as 4 Are Forced to Walk Several Miles a Day for a Simple, Basic Need — Here’s How You Can Help

– Bill Nye vs. Bill Nye: Did the ‘Science Guy’ Once Preach That Human Life Begins at Conception?

– ‘This Is a Miracle’: The Odds Were Stacked Against Hospital’s Smallest-Ever Preemie — but Faith Reigned