'It's the Closest Thing to Jesus I've Seen in a Long Time': Act of Kindness to Injured Vet Goes Viral 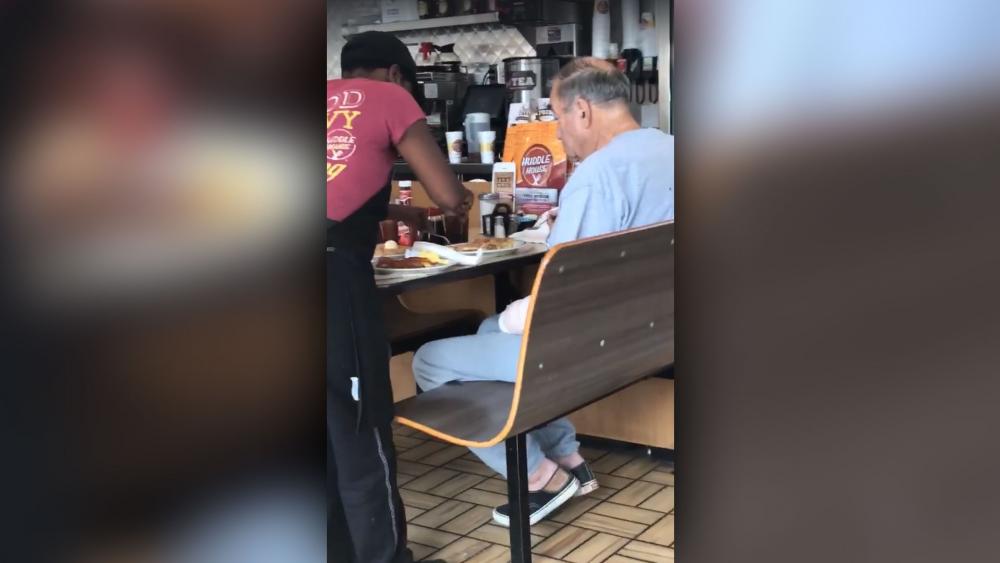 A customer in a Douglas, Georgia restaurant recently witnessed an employee's kindness that touched him so deeply he decided to share it with the world.

Dallas Smith, Jr. was having lunch at the Huddle House restaurant when he noticed another customer trying to eat his order of pancakes with one hand. The customer was a veteran who Smith later learned had been shot in the hand during his time in the military.

Smith said just as the other gentleman who was dining with the veteran made a move to help him cut up his food, the restaurant's cook, Ms. Wanda, stepped in to help.

"She was on the other side of the counter and she saw that he was trying to cut his pancakes and she said, 'I'll get it,'" Smith told Atlanta television station WSB.

As Ms. Wanda put down everything in her hands and walked over to the table, that's when Smith said he started to record the event on his phone.

"It was kind of a warm feeling in there anyway because everyone knows everybody," Smith said. "It threw me so far off guard when she did it. For me, it was just a blessing to see."

"This day and time, when you see that, it gives you hope," he told the television station. "I'm a Christian and it's the closest thing to Jesus I've seen in a long time."

Smith posted the video of the act of kindness to Facebook and so far it has had 199,000 views and has been shared more than 4,000 times.

In response to the attention his video has received, Smith said he's glad people are interested in seeing the cook's act of kindness and that we should help one another without regard to race or age.

Facebook users have also left many uplifting comments about the cook's compassion.

"We never know when we'll need an angel, they're always there at the right time. God bless Ms. Wanda, this man, the young fella caring for him, this is a great example of God's love for us all. Amazing!!!" one viewer posted.